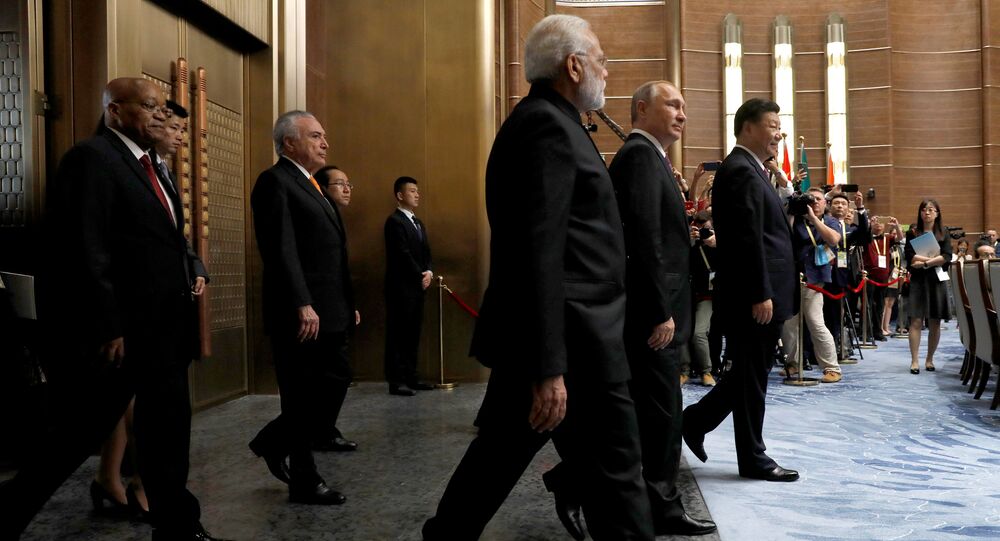 After a 500 year-long struggle for recognition of its status as a European power, Russia has positioned itself as a pivot to the East to develop Greater Eurasia, Glenn Diesen, a professor at the Higher School of Economics, told Sputnik, adding that this may spell the end of the Western-centric geo-economic infrastructure.

Sputnik: In a 2010 interview with Spiegel Vladimir Putin outlined the idea of "a unified continental market with a capacity worth trillions of euros" stretching from Lisbon to Vladivostok. What's your take on this concept? Could this plan be executed while Brussels is fanning its anti-Russian stance in Europe? What is the major stumbling block in the way of a European-Russian rapprochement?

Glenn Diesen: The main stumbling block in terms of a European-Russian rapprochement is nothing less than the failure to reform the entire European security architecture that maintained its dividing its lines after the Cold War. Putin's statement from 2010 alluded to the proposed EU-Russian Union that would unite the trans-European space from Lisbon to Vladivostok based on shared geoeconomic interests. This initiative was part of Russia's 500-year-long struggle for recognition as a European power.

© Sputnik / Vladimir Sergeev
Russian-European Free Trade Zone 'Perfect Opportunity' - Eurochambers President
In the 1980s, the continuation of this political struggle was expressed by Gorbachev's vision to develop a Common European Home. In the 1990s, [former Russian President Boris] Yeltsin attempted to integrate into the West by adopting Western values and implicitly accepting a teacher-student relationship. The decision to develop a Europe without Russia then motivated Putin in the 2000s to seek integration with the West as equals. [Dmitry] Medvedev similarly advocated a new European security architecture to replace the Cold War bloc politics that continues to divide Europe. The West's support for the coup in Ukraine ended Russia's illusions about a gradual integration with Europe. Furthermore, Russia now has a geoeconomic alternative due to the rise of a dynamic, accommodating, and economically powerful Asia after 500 years of dominance by Western maritime powers. Putin's former Greater Europe initiative has now been replaced with a pivot to the east to develop Greater Eurasia.

Sputnik: Despite US threats and EU sanctions European countries line up to join the Turkish Stream project kicked off by Moscow and Ankara in 2015 after Brussels had forced Russia and its European business partners to abandon the South Stream pipeline. What's your prognosis on the future of the Russo-European energy cooperation? Could it form the foundation for a deeper business cooperation and revocation of sanctions in the long run?

Glenn Diesen: Energy cooperation is not obstructed by economics as Europe needs Russian energy, but by politics as Russia is denied any influence on the continent. The EU seeks to develop asymmetrical interdependence with Russia to maximise the EU's autonomy and influence, while denying both to Russia. Asymmetrical interdependence is created through collective bargaining power as the EU's 28 member states and external partner states band together for collective influence vis-à-vis Russia. In EU-Russian energy trade there is symmetry of interdependence as the EU is reliant on Russia as a supplier, and Russia is dependent on the EU as a consumer. To skew the balance of dependence in favour of the EU, there have been strident efforts to diversify away from Russian energy and to ensure that transit states such as Ukraine look to Brussels rather than Moscow for leadership. Russia is now diversifying away from dependence on the EU as a consumer by developing pipelines infrastructure heading to the East. Russia reducing its dependence on the EU could improve relations over the long-term as the EU under German leadership would be more apprehensive about toppling governments on Russian borders and engaging in aggressive economic warfare if Russia has other consumers for its energy resources.

Sputnik: In your book "Russia's Geoeconomic Strategy for a Greater Eurasia" (2017) you emphasized Russia's role as a natural bridge between the East and the West and the South and the North of Eurasia. What is your vision on the future of the Eurasian geopolitics and geo-economy and what part will Russia play in it? Will the EU maintain its dominance or become an equal partner in the constellation of Eurasian nations? How does the idea of the "Greater Europe" correspond to the Anglo-Saxon concept of the Eurasian Heartland?

Glenn Diesen: Russia's geo-economic strategy for Greater Eurasia is a repudiation of its former Greater Europe initiative. The objective is to remove Russia from the dual periphery of Europe and East Asia, and reposition itself within the centre of a broader Eurasian geoeconomic constellation. Eurasia has most of the world's wealth, resources, and population — yet there is very low economic connectivity. A Sino-Russian partnership can collectively create a gravitational pull that allows them to capture the geoeconomic levers of power by creating an alternative to the Western-centric model. This entails developing new global value chains that captures the high-value activities in strategic industries and energy markets, developing new transportation corridors through Eurasia and the Arctic, and constructing new financial instruments such as development banks, trade/reserve currencies, technical standards, and trade regimes.

© AFP 2021 / CHRISTOF STACHE
German Businesses: Gov't Should Work More With Eurasia Amid US Protectionism
Russia's comparative advantage derives from its geographical expanse by developing an East-West corridor connecting Northeast Asia with Europe, and a North-South Corridor that links India, Iran and Russia. Moscow sees itself as a stabilising factor in Eurasia by bringing together the entire continent with economic connectivity to ensure that it becomes multipolar and no one state or region can dominate. The EU stands to lose much [from] Russia's Greater Eurasia ambitions. A Greater Europe would have endowed the EU with a powerful ally to collectively project influence deep into the Eurasian continent. In contrast, Russia's new Greater Eurasia initiative will marginalise the EU's role across Eurasia as socio-economic and political decisions will be made by BRICS, the Eurasian Economic Union, the Shanghai Cooperation Organisation, and the Belt and Road Initiative. The EU is faced with a dilemma as it has strong economic incentives to cooperate with the development taking place in Greater Eurasia, yet this would contribute to the shift away from the Western-centric geoeconomic infrastructure.