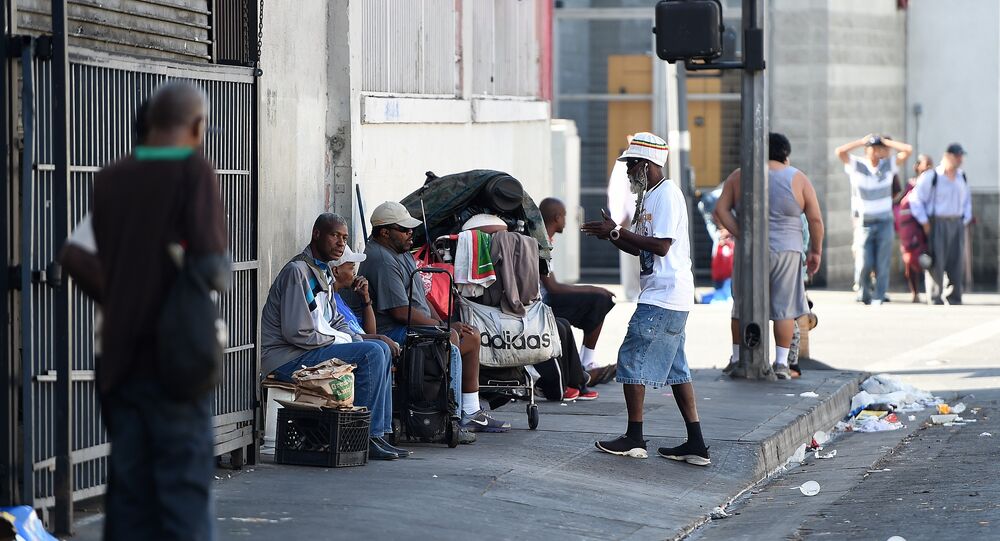 The fight for stronger rent control and a business tax measure to fund homelessness services in San Francisco County, California, are both headed to the ballot box next week.

Frank Lara, a San Francisco teacher and activist with the ANSWER Coalition, discussed the impact that these propositions could have on San Francisco communities with Radio's Sputnik's By Any Means Necessary.

​In California, ballot propositions are referenda or initiative measures submitted to the electorate for a direct vote. If the proposition is passed, California laws can be amended. Proposition C, titled "San Francisco Gross Receipts Tax for Homelessness Services Initiative," is on the ballot for San Francisco voters on November 6.

Voting yes on the proposition is a vote in favor of "authorizing the city and county of San Francisco to fund housing and homelessness services by taxing certain business at the following rates: 0.175 percent to 0.69 percent on gross receipts for businesses with over $50 million in gross annual receipts or 1.5 percent of payroll expenses for certain businesses with over $1 billion in gross annual receipts and administrative offices in San Francisco," ballotpedia.org explains.

"The UN just recently released a report on their visit to the Bay Area just last year. And they said, outright, that it's inhumane how we are violating people's rights the way we treat homeless people in the Bay area," Lara told hosts Eugene Puryear and Sean Blackmon.

"Many folks are disgusted to see such wealth, inequality and the inhumane treatment of people. What's been happening is that a coalition of groups have been trying to address the [homelessness] issue the way it needs to be addressed, which is that resources need to go from the wealthy to provide services for homeless people."

"So, Proposition C came out from different groups coming together and [coming up with a] very progressive form of taxation where they [could charge] a tax on any corporation making over $50 million in profits. It's not little mom-and-pop shops [that would be targeted], not even close, but big corporations," Lara continued.

Two weeks ago, United Nations special rapporteur Leilani Farha presented a report she wrote about the California's Bay Area's "cruel and inhuman" conditions for homeless residents, reporting that residents in cities like San Francisco and Oakland were denied "access to water, sanitation and health services and other basic necessities."

"For those of us doing work here, we're trying to expose the hypocrisy of capitalism and hypocrisy of the Democrats, where they dominate the local politics and the state politics. You see the current San Francisco Mayor [London Breed] coming out against Prop C. [A lot of the] people [who] fit under the umbrella of the Democratic Party [are against the proposition]," Lara added.

In a Medium post published earlier this month, Breed argued that even though addressing the homelessness crisis on San Francisco's streets is her "top priority," Proposition C could make the homelessness problem worse and make it harder to fund homelessness services.

"Our next [California] Governor Gavin Newsom is right: By dramatically increasing our homelessness spending without working with neighboring counties, Proposition C could put us in the untenable and expensive position of funding services for residents from other counties," she wrote.

"If it passes, Proposition C will likely immediately become part of an ongoing lawsuit to invalidate it and similar signature-driven tax measures passed earlier this year. This means San Francisco won't be able to access any Proposition C funds, even as voters understandably expect us to start deploying them immediately. Worse, the lawsuit could go on for years, preventing us from even moving forward similar homelessness funding measures," she added.

In addition to Proposition C, voters will also be voting on Proposition 10 on the November 6 statewide ballot, which would repeal the state's Costa-Hawkins Rental Housing Act.

The act limits rent control in Californian cities, allowing landlords to force tenants who pay below market rate rents to move out and be replaced by tenants who can afford higher rents, contributing to the gentrification of formerly affordable neighborhoods. Its repeal would allow local governments to decide how much landlords can charge residents for rental housing.

According to "Yes on 10" supporters, Prop 10 will keep rents affordable for millions, citing studies that find rent stabilization policies result in economic stability. In addition, supporters claim that Prop 10 will not decrease the available rental housing or limit construction and will protect renters, seniors, veterans and the disabled by not driving people into homelessness due to extremely high rents.

"I think California has one of the highest rising property values [in the US]," Lara told Sputnik.

"[Proposition 10] is an important step, but the broader message is that there is a progressive group, there is a population that wants to see the government, the state, [establishing] laws that no longer benefit the rich and the wealthy but benefit working class folks," Lara added.

However, according to a poll last week by the Public Policy Institute of California, 60 percent of voters said that they will vote against Proposition 10.

The "No on Prop 10" campaign has been largely successful due to ads that state that the measure will hurt homeowners. Many of the ads claim that Prop 10 will take away rights from California homeowners and distort the housing market.