Turkey's operation in the territory east of the Euphrates River held by the US-backed Kurdish militia is inevitable, Naim Baburoglu, a retired Turkish general, told Sputnik, expressing hope that Moscow and Tehran would support Ankara's plan to liberate the US-controlled area.

"The elimination of Kurdish forces in this territory [east of the Euphrates] is not in the interests of the United States," the retired general remarked. "The Americans are strengthening their positions there, building new bases and airfields, and deploying radar systems. Under these circumstances Turkey will finally be forced to take decisive steps making a Turkish Armed Forces operation in the region east of the Euphrates inevitable."

© AFP 2019 / DELIL SOULEIMAN
Turkish-US Patrols of Syria's Manbij May Start 'Today or Tomorrow' – Defense Minister
Baburoglu's comment comes on the heels of President Recep Tayyip Erdogan's vow to crush Kurdish fighters east of the Euphrates. On October 30, the Turkish president announced a major military campaign against the Kurdish People's Protection Units (YPG) seen by Ankara along with the Democratic Union Party (PYD) as affiliates of the Kurdistan Workers' Party (PKK) designated as a terrorist organization in Turkey.

"This statement followed immediately after the quadrilateral summit in Istanbul, during which the Turkish side placed emphasis on the strategic importance of the territories located east of the Euphrates," the military strategist pointed out. "This was followed by Turkey's artillery strike on the positions of the Kurdish Democratic Union Party (PYD) east of the Euphrates in the Kobani district. All these indicate the seriousness of Ankara's intentions and its determination to conduct the operation."

Baburoglu highlighted that Washington had seemingly turned a deaf ear to Ankara's concerns about the situation in the region east of the Euphrates, which poses a direct security threat to Turkey.

Commenting on the potential date of the commencement of the operation, the retired general referred to Turkish Minister of Defense Hulusi Akar's earlier statement that Ankara would focus on the area east of the Euphrates River after sorting things out in Manbij.

"The training process has been completed and joint [US-Turkish] patrols will begin today or tomorrow [in Manbij]," Akar told  Anadolu news agency on October 30. 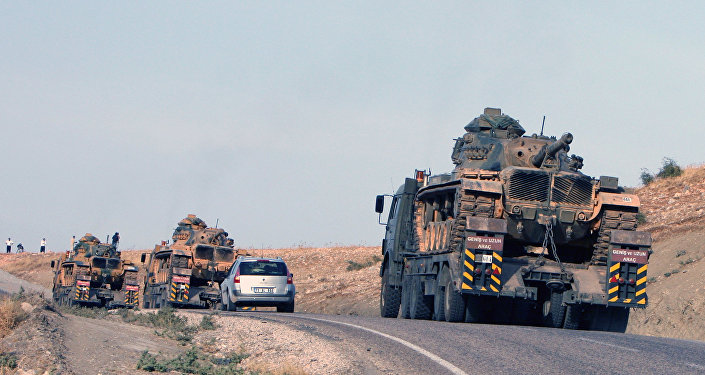 © AP Photo / Burhan Ozbilici, File
US in Touch With Turkey, SDF Regarding Ankara’s Planned Offensive in Syria
The military strategist suggested that "Turkey [would] wait for the completion of the implementation of the joint 'road map' with the United States in Manbij, and after that [would] begin military actions in the territories east of the Euphrates."

"This waiting process is unlikely to last long. It seems that Ankara intends to discuss the situation east of the Euphrates with the US at the negotiating table in the first place — after the recent artillery shelling in Kobani between the Pentagon and Ankara, at least, there should be negotiations at a technical level," the retired general presumed.

According to Baburoglu, if Ankara manages to reach an agreement with Washington about the elimination of the YPG in the region or at least transferring them south of Raqqa, then it will be possible to implement a Manbij-style roadmap in Kobani, Tell Abyad and Qamishli.

He emphasized that one should not forget that the Manbij roadmap has not been fully implemented so far: "Up to 7,000 Kurdish fighters are still stationed in the area; they have not yet surrendered the weapons supplied to them by the US," the military strategist said. "Thus, it is obvious that the United States did not keep its promises regarding Manbij."

Citing Erdogan's intention to crack down on Kurdish forces east of the Euphrates, Baburoglu ruled out the possibility of direct confrontation between Turkish and American military personnel in the area: "The United States will try to confront Turkey in the region indirectly, using Kurdish YPG troops or mercenaries for this," the retired general suggested.

He reiterated that Turkey attaches great importance to the region.

"This region accounts for about 30 percent of the total territory of Syria, and the US is trying to establish its control here," Baburoglu underscored. "I believe that Russia and Iran are concerned about Washington's strategy there and will provide Turkey with diplomatic support for the operation."

The views and opinions expressed by Naim Baburoglu do not necessarily reflect those of Sputnik.