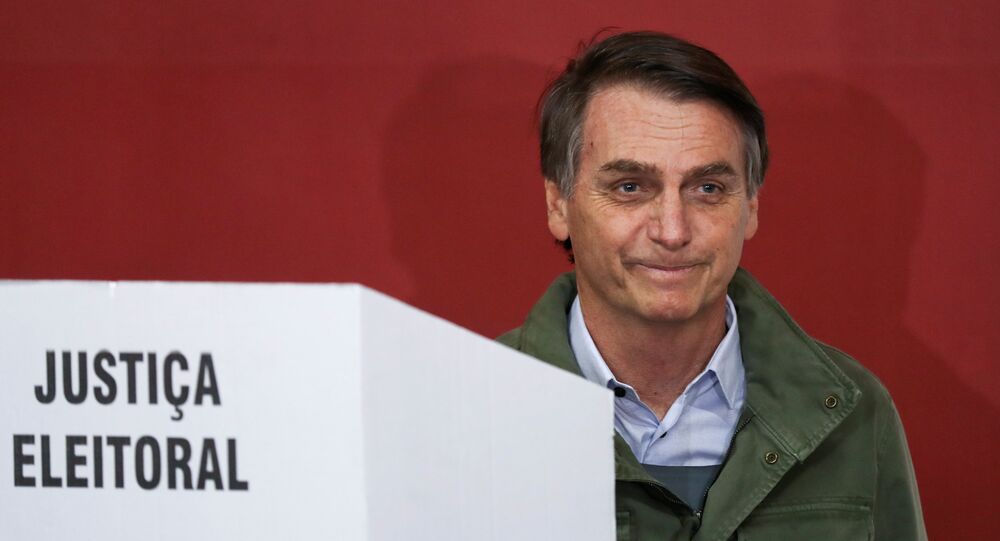 Brazil and the US will work closely together on trade, military and in other domains. This is what US President Donald Trump tweeted as Brazil's new President, Jair Bolsonaro, claimed a decisive victory in Sunday's presidential election. Sputnik discussed this with Renata Avila, a political analyst specializing in Latin America.

Sputnik: What do you make of the victory of Jair Bolsonaro in this presidential election, do you think it was quite predictable?

Renata Avila: It was predictable, it was a very turbulent campaign, a very violent, very complicated political environment, the one leading up to the election of Jair Bolsonaro in Brazil. During the first round of elections in Brazil he was leading the polls and the trend stayed stable. People made up their minds during the first round and they would stick to their position in the second round despite the massive efforts of the opposition party to change the results and make people change their mind and endorse the Democratic candidate Haddad.

Sputnik: So what's the reason for his success? Why did people vote for Bolsonaro?

Renata Avila: Even if it is very different ideologically to the President Manuel Lopez Obrador in Mexico, it was a similar situation. I think the people of Brazil rejected the party that had governed the country for a long time and they wanted a change with this vote, refusing to continue with the same people in charge. In spite of very controversial against-rights agenda, people voted for change and people voted for a very conservative agenda as opposed to a very progressive agenda, and the main reasons might be that the coalition of the Evangelical church pushed that agenda forward and endorsed the president massively, with up to 27% of the people of Brazil attending that church, and the bad economy. The economy in Brazil is in really bad shape, and the massive scandal with corruption really affected the leadership of the Workers Party (PT).

Sputnik: Bolsonaro has been nicknamed the 'Trump of the Tropics', do you agree that in many ways he has stances very similar to that of Donald Trump?

Renata Avila: I don't think that he's the 'Trump of the Tropics', I like to compare him more to the generals we had the past during (Brazil's) dictatorship, sadly. He's more similar to Duterte of the Philippines or even Pinochet in Chile, back in time. Why is he now compared to Donald Trump? It's the first time that people voting for him are hoping that he will not fulfill his key promises.

© REUTERS / Nacho Doce
Bolsonaro Wanted to Send Message of Protest to Political Establishment - Prof
His promises are hunting the opposition, destroying institutions, and placing the military in positions of power, similar to the reign Brazil had during the dictatorship. So it's very worrying to hear not only him but his supporters calling for social cleansing, calling for killing the poor, calling for really, really harsh measures that might affect profoundly a country that has achieved many things in the past years, such as a reduction of people living in extreme poverty. So he's not the 'Donald Trump of the Topics', he's something different, it's something more worrying.

Sputnik: So who, primarily, were his electoral base? Who supported him?

Renata Avila: Mostly white people. Brazil is still a country that is divided by economic classes and race, it's highly unequal. It's one of the most unequal countries in the world and the economic elite endorse him. Also there's an increase in the white supremacist movement in Brazil, (which is) endorsing him. Most of the Democratic candidates (supporters), regardless of the condemnation of alleged PT corruption, they did not endorse Bolsonaro. It was more grassroots support, a very grassroots campaign that reached most of the conservatives in Brazil, they are his base, really religious conservative people.

Sputnik: Can you talk about some of his campaign promises?

Renata Avila: He hasn't shown many comprehensive plans for his government; his campaign promises are still very much empty promises, without solid support for policies or exports. I would say that the only area where he proposed a very concrete plan is the economy, and the other areas are a little bit flat.