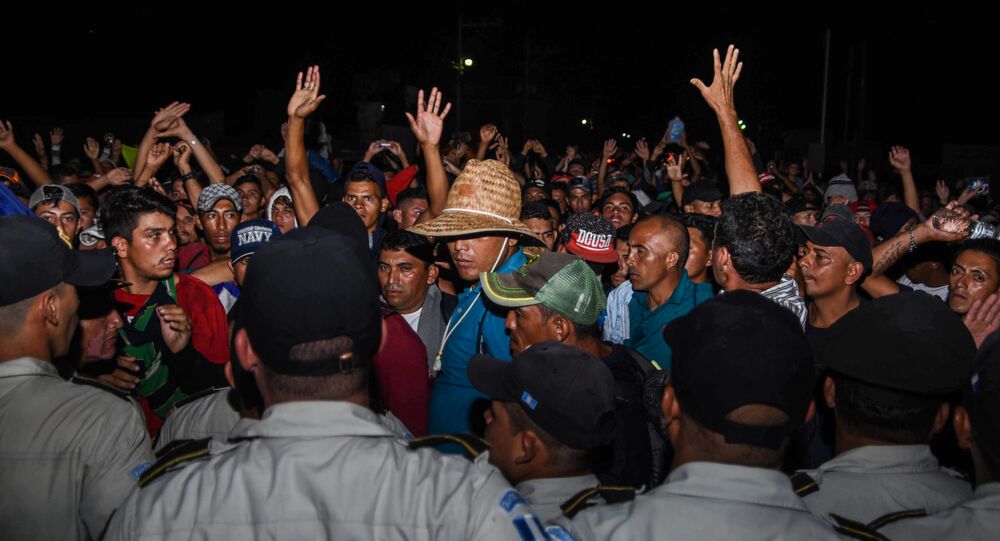 US President Donald Trump indicated Monday he’d like to eliminate birthright citizenship in the US, claiming he could do it via executive order. Congressman Paul Ryan, who leads the House of Representatives, pushed back, though, saying it required amending the US Constitution.

"It was always told to me that you needed a constitutional amendment," Trump told Axios on the HBO network Monday. "Guess what? You don't. Number one. Number one you don't need that. Number two, you could definitely do it with an act of Congress. Now, they're saying I can do it just with an executive order."

"We're the only country in the world where a person comes in, has a baby, and the baby is essentially a citizen of the United States for 85 years with all those benefits. It's ridiculous. It's ridiculous, and it has to end," the president continued.

However, on Tuesday, House Speaker Paul Ryan (R-WI) told WVLK Radio that the president was mistaken on his understanding of constitutional law: since birthright citizenship comes from the 14th Amendment, it can only be removed by another constitutional amendment.

"You cannot end birthright citizenship with an executive order," Ryan told WVLK Radio, as quoted by The Washington Post.

That's only been done once before: the 21st Amendment ended the Prohibition era, during which alcohol sales were prohibited in the US, which was created by the 18th Amendment.

Such a change requires not only that two-thirds of Congress pass it in a vote, but also 38 of the 50 US states have to sign off on the idea (which entails two-thirds of each of their state legislatures passing the amendment, too). As such, it's a long, drawn-out process that doesn't happen overnight but typically takes several years, if not longer.

The 14th Amendment was one of the Reconstruction amendments, passed in 1868 during the country's reorganization after the end of the 1861-5 Civil War and the subsequent end of slavery in the US, which saw about 3 million formerly enslaved African-Americans become US citizens. Among other rights and protections, the amendment stipulates that "all persons born or naturalized in the United States, and subject to the jurisdiction thereof, are citizens of the United States and of the state wherein they reside."

Vice President Mike Pence also commented on the issue, saying that the Supreme Court has never clarified the question of birthright citizenship and how it applies "to people who are in the country illegally."

Trump aims to end this right in order to disincentivize immigrants coming to the US, since under its stipulations, children born on US soil are automatically citizens, regardless of the citizenship status of their parents.

Radio Sputnik's Loud & Clear spoke with Juan Carlos Ruiz, cofounder of New Sanctuary Coalition, about Trump's proposal and what it represents in the greater context of US politics under the Trump administration.

​"There will be opposing forces" to any such move by Trump, Ruiz said, because "once you give in to this craziness, what happens is [that] we enter into a slippery slope where the democratic values and pillars are being eroded."

© AP Photo / Matt York
‘An Act of Cruelty’: Hundreds of Immigrant Families Remain Separated by US

"We cannot expect anything less from this administration. Right from its beginning," Ruiz told hosts Brian Becker and Walter Smolarek, "it has been characterized by this bullying quality of basically downplaying, attacking human dignity — not only of minority groups, but also of citizens. I think we need to really make the connections and sound the alarm because this is an attack on all people. It is not just our common humanity that is being under attack, but it is really the whole concept of who is a citizen, who is not. It's being attacked, and it's being redefined under racial lines. So we need to really sound the alarm on this."

Ruiz said he hopes that it "just goes away" instead of being litigated in the courts. "I think that the political capital that we have nowadays is being wasted. A lot of people are caught up with this caravan, and we have seen how this has played out in terms of gaining some terrain for the Republicans."

Looking ahead to the upcoming midterm elections in the US, which are scheduled for November 6, Ruiz said, "We need to not only sound the alarm but denounce any kind of attempt to override the Constitution. I think… if you are a patriot, if you really say that you love this country, we do need to be rising up and saying ‘You cannot do this.' If we give in to this, I think thugs [and] dictators will have an easier way to utilize the power against us — against the common folk, against this nation."

"We have those amendments precisely because we believe that the Constitution gives us a blueprint in which we can uphold the dignity of every person, of every citizen here in this country, on this land. So we need to defend that," Ruiz said.

Regardless of his ability to eliminate birthright citizenship, Trump does have the power to deploy US troops in defense of the country. The Pentagon confirmed Monday that 5,200 active-duty troops were being deployed to the states that border Mexico to bolster security ahead of the anticipated arrival of several thousand Central American refugees en route to the border through Mexico.

​Trump tweeted Monday to the inbound refugees to "please go back… our military is waiting for you."

Ruiz told Sputnik that the troop deployment was an attempt to gain political capital, noting that by doing so, "they are normalizing such force. We need to decry this attempt with the purpose of gaining the upper hand as we vote in the midterm elections."

However, Ruiz noted that Mexican human rights champion Father Alejandro Solalinde Guerra has decried the direction of the caravan by "United States interest groups," as Ruiz put it, "for the Republicans to get a better grip in terms of the midterm elections."

Solalinde said on Monday that recommending that the caravan travelers go north to the US border instead of settling in Mexico is "to recommend that they go to the slaughterhouse," Proceso.com reported. He condemned the poor organization of the caravan as creating unnecessary danger for the refugees.

"They already know, and they do not talk about going to the United States anymore, because they know that there they will not achieve anything, and if someone leaves [the caravan] it is because of their risk and on their own. We are talking about that they will seek an integration to our country in Mexico City," the human rights activist told La Razon Tuesday.

The organization Pueblo sin Fronteras, one of the groups that organized the caravan, condemned Solalinde's comments Tuesday, portraying the caravan as self-organized and rejecting his claims that they are directing it.

"Criminal groups control a lot of those routes," she told By Any Means Necessary, indicating that when migrants traveled in caravans instead of individually, they were far less susceptible to narco-traffickers and the abuses of "coyotes" — hired guides.

"We have to connect the dots," Ruiz said Tuesday, between criminalizing the refugees in the caravan and the "very dangerous proposal" to do away with naturalization in the US.