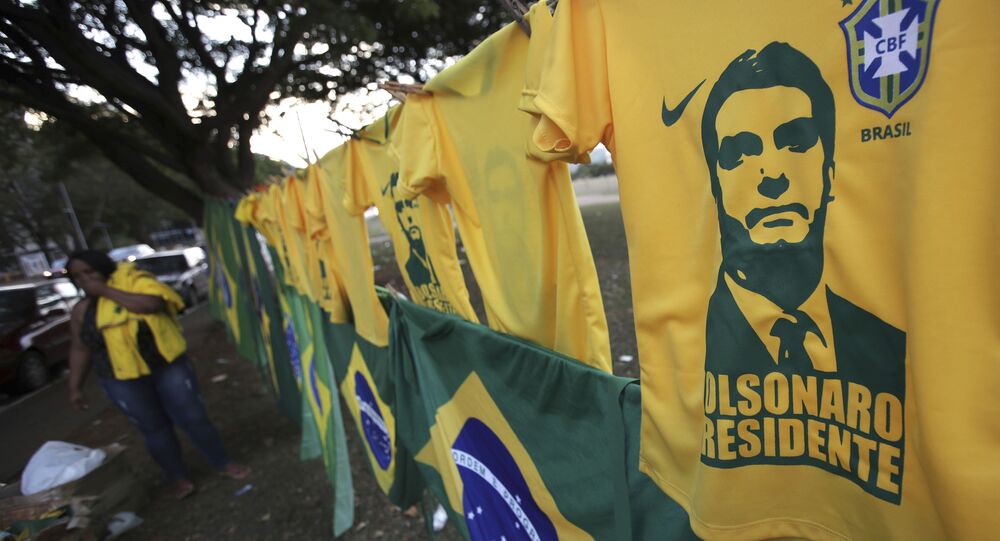 Brazilian President, Jair Bolsonaro, has pledged to tackle bureaucracy in the state, to downsize the federal government and make streets safer during his term as he claimed a victory in Sunday's presidential election.

Radio Sputnik discussed Bolsonaro's victory with Manuel Balan, Assistant Professor from Institute for the Study of International Development at McGill University in Canada.

Sputnik: Now, obviously we've just had the recent elections in Brazil. I don't know whether the actual result threw open an interesting result but say what does Jair Bolsonaro's victory mean for the fourth largest democracy in the world, Manuel?

Manuel Balan: I think it means a few different things. On the one hand, the obvious answer is that it means a sharp turn to the right after twelve years of selecting the Workers' Party to be… now for four different presidencies, right?

© REUTERS / Sergio Moraes
US Has 'Biggest Expectations' About Brazil's President-Elect Bolsonaro - Prof
This now marks the shift to the right of the political spectrum, the far right, and, in fact, it marks the election, the democratic election of the farthest right candidate in the region I would say and at least modern political history since the return to democracy.

And so all of those things are very clear pictures right now. What it will mean in terms of policy is a bit more futuristic and a bit harder to assess but we can get into that for sure.

Sputnik: Now, I think we both agree whenever a new president, a new party comes to power in any year in country after a general election, is a general feeling of hope, a new chapter of the country's history is about to unfold? What is the newly elected president facing now and how able is he to deliver on his campaign promises because the electorate obviously bought into his promises and they're expecting some change and uplift in the economy and personal quality of life I would imagine?

Manuel Balan: Yeah, well, first what I have to say that the electorate in Brazil, it's hard to say whether it has really bought into Bolsonaro's promises and his campaign platform.

I think the boat in Brazil can be seen as a combination of an untied system boats and an untied Workers' Party boat. That was very prominent among about a third of the population and so I think, you know, a number of people in Brazil have a stronger anti-party identity in that sense than a strong pro-party identity and in this sense the vote can be read also as the rejection of the Worker's Party more than a strong support for a clear mandate.

© AFP 2021 / HANS KLAUS TECHT / APA / AFP
'Not Him': Roger Waters Takes Aim at Brazil's Bolsonaro in the Face of Arrest
I don't think Bolsonaro has that clear mandate. Now, that said he did make a number of campaign promises or proposals; his campaign was quite big on many points. And now he faces as any president in Brazil when he is elected or she is elected they face a strong and difficult battle in Congress, right.

Brazil has a very fragmented congressional composition and gaining any sort of majority in Congress is increasingly hard and this will not be any easier for Bolsonaro, right, even though the parties that support him did pretty well in the Congressional election which was about three weeks ago, he still is very well short of the majority that he would need to pass on key points of legislation.

So, I think what comes up next is a lot of coalition building on his part and now we have to see how apt he can be at finding those coalitions. Let's remember that Bolsonaro is a politician that has been a fringe politician within the Brazilian Congress for a few decades, and now he is the one in charge of, you know, creating that negotiation in the consensus that is not easy to come by in Brazilian politics.

So, what we have to face right now is a strong difficult battle ahead for Bolsonaro in creating that coalition. Whether he will be able to pass legislation and move forward on different proposals is still very much a question mark.

Sputnik: Now, should Brazilians expect dramatic changes in domestic policy and what could that entail? What's your take on that?

Manuel Balan: I think it varies by sector. I think, you know, some of the most inflammatory things that Bolsonaro has said are rhetoric and rhetoric only, and I don't think we will see strong policy changes in terms of gender, in terms of LGBT communities, etc…etc.

I think that is not going to be the focus, the main focus at least initially of his policy agenda. I do think that where he will push forward and where we may see a significant change is in environmental protection and the exploitation of the Amazon.

© REUTERS / Nacho Doce
Facebook Shuts Down Dozens of Alleged Pro-Bolsonaro Accounts in Brazil
This was very much a part of the type of business support that he received from mining companies and other companies that have been opposing these environmental regulations that have been weak but existing in Brazil and so I think that we can see very quickly moving further.

Another thing that I can see him moving quickly on is different types of, sets of institutional rules. He said he wants to increase the number of judges in the Supreme Court. This is sort of a way for him to manipulate the rules a little bit so that he can get key policy proposals past the agenda and then know that the Supreme Court will support them.

And so I think the first type of the initial policy changes that we will see will be first on the environment and second on loosening some institutional constraints to policy by the president. And once those, if he manages to achieve those, I think then we will see significant policy change.

Sputnik: Now, we know that Brazil is a very integral part of the BRICS economic community for emerging countries. What would you say to Bolsonaro's presidency and his meaning of the country's participation now in BRICS? Is there gonna be any specific change in strategy or is there gonna be a specific focus on the president's lookouts. Is there something you can share with us on that?

© REUTERS / Ricardo Moraes
Bolsonaro Sees Gun Laws Liberalization as Priority for Future Government
Manuel Balan: I think there is, in a sense, so if we look at Lula's presidency and we compare it to Dilma's presidency, we saw a change in foreign policy in Brazil. Lula saw himself as a world leader and he wanted to increase the role that Brazil played in the world and this included Brazil's role in BRICS and so he sought out after a leadership role and Dilma did not, and this was one clear difference.

I think Bolsonaro will be closer in attitude to Dilma than to Lula in a sense that I don't think he will try to take on strong leadership roles in any sort of international sphere. I think he will be mostly inward-looking.

That said, because his positions are very business-friendly, very trade-friendly, very in support of, say, what the markets want, whatever we see that is, I think Brazil's markets will respond positively to Bolsonaro's election.

Markets again don't care about some of the things that have generated deep reactions against Bolsonaro and so markets care about other things and according to those things that markets care about, which are very hard to pinpoint sometimes, you know, I think Brazil's role will be not a leadership role but markets will react positively and this will be reflected in its role within the BRICS and its role within the international market.

Sputnik: And just the final question, Manuel. Bolsonaro has already been nicknamed the Trump of the Tropics, that's interesting in itself. What would you expect from the US-Brazilian relations now moving forward?

Manuel Balan: I mean, I think, you know, this is not the first turn right that we have seen in Latin America. It's the sharpest turn right and it's of by far the largest economy in the region.

© Sputnik
Bolsonaro Victory Opens New Stage in Brazil’s Political Struggle
I think the general attitude from the US government is (that) the current administration is positive towards these right turns in the region. There is again less of a concern with the type of rhetoric that Bolsonaro has used that has inflamed, that has created a lot of attention in international media.

Again, I see Bolsonaro is looking up to Trump, he has said so much and I see Trump is being friendly with the figure with whom, if not on the details, he coincides in a general approach to politics.

And so, I think if anything we are in for stronger Brazilian-US relationships than we had at least during the Worker's Party. Things have been sort of in a wait mode since the impeachment of Dilma and the short-lived Temer presidency, and now I think things will get tighter if anything.