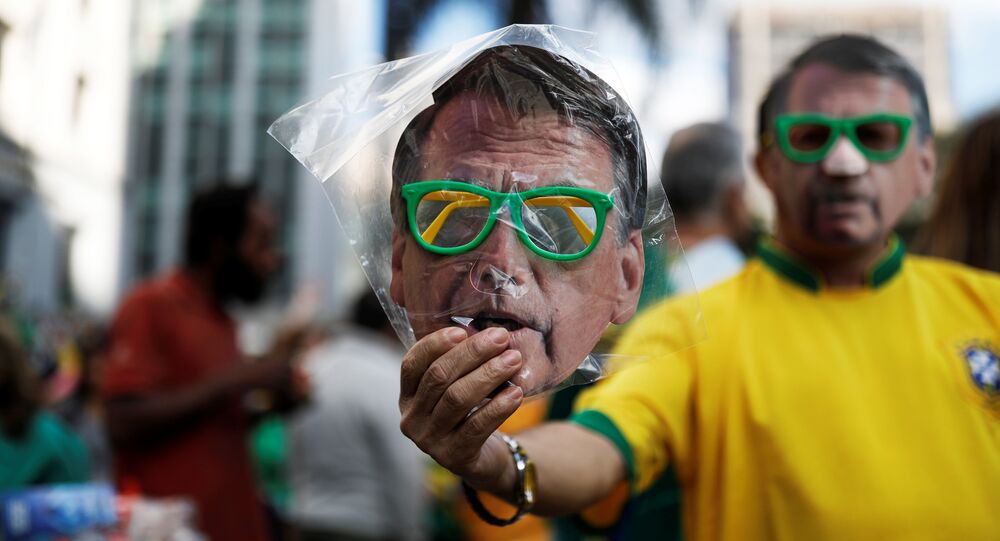 Donald Trump wrote in his Twitter as Brazilian President Jair Bolsonaro claimed a decisive victory in Sunday’s presidential election that Brazil and the United States would work closely together on trade, military and in other domains. President Trump also wrote that Mr Bolsonaro and he had “a very good conversation.”

Sputnik: What does Jair Bolsonaro's victory mean for the fourth largest democracy in the world

Mark Langevin: It's a pretty remarkable political realignment from center-left social democratic center gravity to a more of a right-wing, that many of us call conservative, nationalist center of gravity. Now you have a clear majority in Congress, you have a president-elect who is looking towards a government that's somehow going to symbolically enforce more conservative social values and at the same time adopt market-friendly policies.

Sputnik: What do you think will be the first changes that we will see in domestic policy and how dramatic do you think that they will be?

Mark Langevin: Proposed Minister of the economy Paulo Guedes mentioned that he was going to eliminate the budget deficit in one year; that's a huge goal, one that he would probably step back away from in the coming weeks.

Clearly, the government has committed to engaging in some form of fiscal adjustment that would rapidly cut expenditures. So, we're really looking at a social security reform in a coming year; and that's always been a very difficult reform for the Brazilian Congress to adopt.

© REUTERS / Sergio Moraes
US Has 'Biggest Expectations' About Brazil's President-Elect Bolsonaro - Prof
Mark Langevin: Despite his 27 years in the Chamber of Federal Deputies, he has distinguished himself as a legislator, and he has never administered anything in his life; so I would guess that he is quite unprepared to be an executive of one of the largest nation-states in the world.

However, we have to wait and see what his team looks like — the ministers and advisors — how they shape up the ministers and his advisors with respect to public administration and also being able to articulate the reforms and get majorities in Congress for him.

Then I think that he may have a better chance, but still we have to wait and see. The critical variable here is whether his political party that did quite well in the elections and now has the second largest group in the lower house can take the lead and push through these reforms. That's still in doubt.

Sputnik: Of course, his win has really been quite alarming to progressives; he has had some very controversial previous comments supporting torture, calling for political opponents to be shot, he had comments that were very misogynistic against minorities and LGBT people. Although, upon his victory speech, he said that he was going to govern for all Brazilians regardless of orientation, opinion or color, what are your thoughts, is he going to suddenly change after winning?

© AP Photo / Leo Correa
There’s Nothing About Bolsonaro to Suggest That He’s a Racist - Prof
Mark Langevin: He definitely said those things. I think that we should all be very concerned about what his positions have been over the past three decades; quite astonishing some of the violent rhetoric that he uses.

He is a bit conciliatory. I'm a bit less concerned with him wanted to be a populist and he just wanting to be loved and win elections — so far he has achieved that. We're really worried about his core supporters who are at times associated with law enforcement agencies or armed militias and have already shown a disposition to go out in the streets and use violence and coercion against their adversaries.

This is something that we're going to have a quick look at to see whether we'll see a quick uptake in street violence and so forth. I believe that we have seen this; now it's a challenge for the President to tap this down.

Brazilians have voted for him; Bolsonaro basically wanted to send a message of protest to the political establishment and to the Workers Party that corruption and crime need to be seriously addressed in the country. I think all of u have a comparative or global perspective concerned about his rhetoric. We just have to wait and see whether he takes action.

Sputnik: Do you think he will be able to do anything about corruption in the country and also the crime? What means has he proposed toward this end?

Mark Langevin: Fighting crime and corruption are the two biggest issues. In two years we're going to know whether he is a popular president because he was successful on those two issues, or failed miserably.

© REUTERS / Nacho Doce
Brazil 'Cannot Continue Flirting with Extremism of the Left': 'Tropical Trump' Bolsonaro Wins Election
Those two issues are very difficult in Brazil. First of all, political corruption, the kind of procurement like kick back corruption and the Lava Jato surrounding corruption; this is more complicated than to just keep building it individual person or party. In fact, one of his allies, the Progressive Party, a very conservative party; it's the most associated with the recent Lava Jato scandal.

And now this party is in close alliance with Bolsonaro. Also, his potential Chief of Staff, a legislator from the southernmost state of Rio Grande do Sul is under investigation for having a fund that's similar to the Lava Jato-type corruption.

Certainly, there will be allies in the coming years that will fall under investigation for corruption, the question is whether he will protect those individuals or as the former President just simply watch and see if they're able to defend themselves against corruption allegations.

That would be a very important point in the next 12-18 months. Crime in Brazil id fought in the federal system in which the state government controls most of the law enforcement agencies on the ground that are responsible for protecting citizens and investigating crime.

Unfortunately, most of these law enforcement agencies are doing a very poor job of investigating crimes to find out who is committing homicides and so forth. I haven't seen any proposal by Bolsonaro that would improve their performance; we have to wait and see.