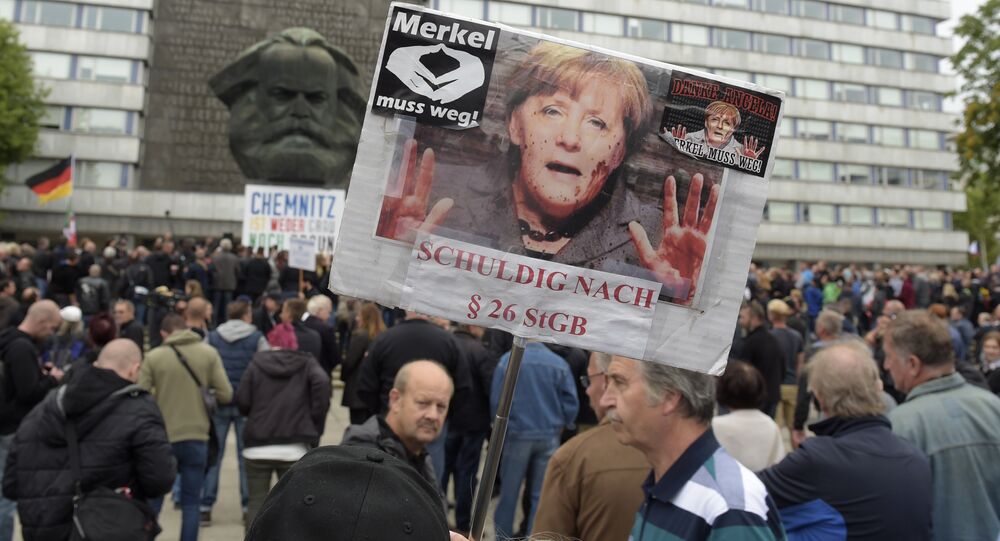 Germany's governing parties are bracing for elections in the state of Hesse on October 28, as polls suggest that the Christian and Social Democratic coalition could see a drop in support. Sputnik discussed the regional elections in Germany with Alastair Newton, a former career diplomat with the British Diplomatic Service.

Sputnik: Angela Merkel has really downplayed the importance of regional votes for her party. Do you think that she is missing the warning signs that could possibly be emerging from these elections?

Alastair Newton: On the contrary — I think she is well aware of the warning signs and that's why she's trying to play down the importance of regional elections, which is somewhat paradoxical to the fact that she has been actively campaigning for the last couple of weeks in Hesse in […] normally expect a German chancellor to do, even though the CDU [Christian Democratic Unity] premier there is actually a close ally of hers.

I think it would be impossible for her to distance herself from a bad result for the CDU, which doesn't necessarily mean a defeat, but just a very low share of the poll.

Sputnik: Why is it that the support for the Christian Democrats is plummeting right now?

Alastair Newton: There are a number of reasons. The most notable of them is that opinion polls in Germany are consistently telling us that nationally, the Merkel-led CDU-SPD [Social Democratic Party] coalition has less than 50% support among voters. This is "Merkel fatigue," it's fed up-ness with grand coalitions, of which we have had rather a lot in the last 13 years or so, since the 2005 election.

It's also the fact that the grand coalition is dogged by in-fighting and actually not being an effective government. I think the Germans are just completely fed up. They want a change.

You have to put this in the context, of course, of the long-term trend since the 1980s that the two traditionally large parties in Germany, the CDU and the SPD, have consistently been losing support to smaller parties, to the point where these parties are represented in the Bundestag.

Sputnik: What are the major issues that are changing the game right now in German politics?

Alastair Newton: Well, the big one, of course, is refugees. There is still a very big hangover in Germany from the perceived mess which Merkel made of the refugee crisis in 2015. That is the single biggest issue in German politics today.

We saw it writ very large in the Bavarian state elections just two weeks ago and it's a common factor in all elections in Germany today, as we see in around 13% support nationally for Alternative for Germany, the populist nationalist party, which broke into German politics just around that time.

Sputnik: It's very interesting now. Some people are actually saying that it's very telling that when German Chancellor Angela Merkel did show up to support her own party in Hesse. Before these bellwether elections today, she pretty much urged voters not to consider her. What does it tell us about the flagging strength of the chancellor?

Alastair Newton: Well, she is trying to get voters to focus on local issues, because the CDU-Green government, which has been in power in Hesse since 2013, has actually performed pretty well and if voters were to vote on the basis of local issues alone, almost certainly we would see a renewal of that coalition.