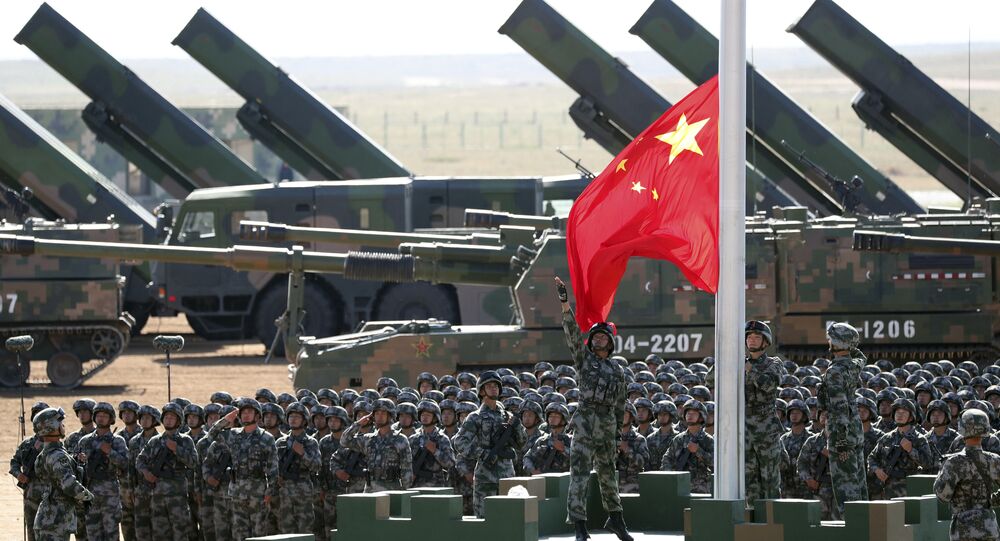 Whom Did the Chinese Defense Minister Warn?

On Thursday, during the opening ceremony of the Xiangshan Forum, Wei Fenghe, China’s minister of defense and a State Council member, said that “China will take decisive steps regardless of the cost to preserve its territorial integrity and repel attempts to separate Taiwan from the country.”

Experts, asked by Sputnik, claim that the Chinese leadership decided to use the forum as a platform to attract attention to the rising tensions over Taiwan and once more draw a “red line” on the issue.

Deputy Director of Moscow State University's Institute of Asian and African Studies Andrey Karneev thinks that it is extremely important that the Chinese minister of defense gave an assessment of the situation over Taiwan.

"It shows that Beijing doesn't exclude military means of solving the Taiwan problem, nonetheless giving preference to peaceful dialogue between the two countries. However, growing Taiwan-US military cooperation does concern the Chinese military leadership. Wei Fenghe was addressing Washington in particular when he said that China opposes provocations used to accomplish the interests of certain countries, headstrong unilateral sanctions, and risky military actions. The expert pointed out that the Taiwan topic is now being included in the context of China-USA relations and in the context of preserving global and regional stability, in general."

© AP Photo / Sergei Chuzavkov
Former US General Predicts War With China Likely Within 15 Years
The Chinese consider the Xiangshan Forum to be a "counterweight" to the Shangri-La Dialogue, where the Americans play a major role. The Chinese forum is officially organized by the Association of Military Sciences and the Association of International Strategic Research of China.

The first forum of this kind took place in 2006 and was thereafter conducted every two years, but has been organized annually since 2015. Last year was an exception because the forum was canceled. That year, the 19th party congress indicated the direction of China's internal and external policy. In his speech, Xi Jinping stated that all actions aimed at dividing the country would be repelled.

What prompted Chinese Defense Minister Wei Fenghe's statements and to whom were they addressed? Sputnik posed this question to Chinese expert Chen Xiaoxiao of Xiamen University.

"Of course, his speech was addressed to somebody. Judging by the current global situation, the key positions in the Trump administration are held by ‘hawks' and conservatives trying ‘to play the Taiwan card'. The Asian policy is directly aimed at conflict with China. The US is trying to fulfill its economic and strategic interests through a large-scale trade war. Facing the US' aggressive policy, China has once again demonstrated its position, saying that it is willing to promote a dialog on security issues, mutual trust, and cooperation in South-East Asia. The Chinese military points out that it is adhering to peaceful development, but at the same time is ready to defend [the country's] national sovereignty and security."

What bothers top Chinese officials more — the politics of Taiwan's administration, which has actually cut its dialogue with Beijing, or Trump's policy towards Taiwan? Here is how Chen Xiaoxiao assesses the situation.

"If we compare both, then, of course, Trump's policy is a much more serious matter of concern for Beijing and it requires an appropriate response. After Trump's election, Washington declared China its ‘strategic adversary' and the US embarked on a major change in its political course towards China. Warship calls in the Taiwan Strait have occurred more frequently, US patronage of Taiwanese authorities has been strengthened. The Taiwanese administration has been quite happy to get US support in order to strengthen its position. This is especially relevant now when the US is on the threshold of midterm elections for Congress and Taiwan will face local elections soon. Due to these elections, both parties are focusing more on the ‘Taiwan issue' and plans to increase pressure on China are becoming more and more evident."

However, many experts consider it quite unlikely that the US and China would start a war with each other over Taiwan. Sputnik discussed Wei Fenghe's speech with Dr. Joseph Cheng, professor of political science at the City University of Hong Kong.

"It is to a large extent a political move. The risk of a large-scale military conflict in the Taiwan Strait is very low. I believe, as the US government understands quite well, this is probably one of the most important red lines, both strategically and militarily, set by the Chinese government. The aim of this statement is apparently to warn the US that China treats this red line very seriously."

Views and opinions expressed in the article are those of the experts and do not necessarily reflect those of Sputnik.