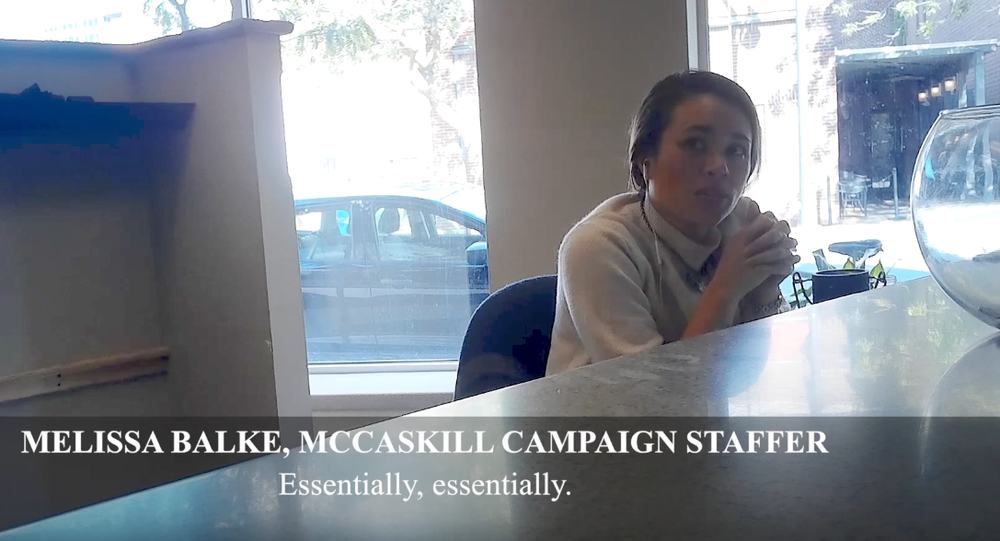 Project Veritas, an investigative journalist group that surreptitiously films political and corporate figures and publishes the videos, has taken aim at Democratic politicians in typically Republican states, revealing them saying they tell voters they’ll do one thing once elected, but intend to do another.

Veritas filmed Democratic candidates and their staffers from three US Senate races — Phil Bredesen in Tennessee, Claire McCaskill in Missouri, and Heidi Heitkamp in North Dakota — in which the liberal candidates must satisfy moderate or conservative voters in order to be elected.

© AP Photo / Pablo Martinez Monsivais
Project Veritas: 'We Want to Shut MSM Down for the Liars They Are'

Project Veritas found that while these candidates typically touted moderate policies to voters, either them or their staffers readily disclosed a very different reality: donations to the candidates from politically divisive groups like Planned Parenthood made by way of third party organizations, frank admissions of an intent to pursue much more liberal policies in Washington than they claimed in their stump speeches and even the frank admission that they must "essentially" lie in order to get elected.

O'Keefe spoke with Radio Sputnik's Fault Lines Thursday about his latest project, which can be read and watched at Project Veritas Action, about honesty in politics and the fate of the red state Democrat.

​"We've been going into these red states, these battleground states and exposing — there's this problem with politicians in red states because they have to appeal to moderate voters and woo their base, particularly red state Democrats," O'Keefe told hosts Garland Nixon and Lee Stranahan.

© Sputnik
Will the Issue of Health Care Deliver the "Blue Wave" to Democrats?

"So there's a story there — in Tennessee, Missouri and North Dakota — we've done three so far. These staffers for these senators are saying things like, in Tennessee, [a staffer] said, ‘Phil Bredesen… he'll be a good little Democrat, he'll be [Senate Minority Leader] Chuck Schumer's guy,' and, ‘It's not about Tennessee, it's about the blue wave.' In Missouri, [McCaskill's] staffers say, ‘Well, [former Democratic President Barack] Obama and McCaskill have the same views, but we can't say that. She's gonna ban semi-automatic rifles, but we can't say that.' And then we just released one in North Dakota on Tuesday where they say she's gonna become an extremely super-liberal candidate once elected. So it's the old bait-and-switcheroo, saying one thing and then [doing another]. But the difference now is that we have the staff on tape saying that that is, indeed, what their prerogative is."

O'Keefe explained that there is a gap between how people present themselves to the public and "how they really are," saying it's "just a truism of our politics that in red states like North Dakota, Tennessee, Missouri, Arizona, Florida and Montana, the Democrats have to — it's almost like they have a precondition of getting elected — you must woo the progressive base and play to the moderate voters. The thing about the moderate voters is, you can only make one choice: when Heidi [Heitkamp] gets elected, she has to choose a policy. So we're just asking them to be honest."

"What we're learning is that when you're honest with voters, you cannot get elected," he said.

"And these people in these offices that we've interviewed — we didn't just talk to one [person] we talked to every staffer in these offices — they're all saying the same thing. One of them says — this is in McCaskill's office — that she has to ‘essentially' lie to get elected. Not my words, their words. Again, Project Veritas: people don't know they're being taped, we don't report anything unless you can see it and hear it coming out of the people's own mouths," O'Keefe said.

"There are some people, like [Democratic Senator] Joe Manchin… he seems to be who he says he is, he represents the people of West Virginia. What we're finding out is in these states, like Tennessee — you know, Tennessee's a great example, we did the Phil Bredesen investigation — all of the staff was saying, ‘Once he gets elected, he's gonna be part of this national Senate consensus, this progressive consensus. We can't say that yet because we're trying to woo the moderate voters.' Now what's interesting is, all the staff are, like, transplants: they're very progressive, they don't really care about that particular state… They're in it to win it for the far-left part of the Democratic Party."

"But no, this is a problem, and I don't understand why people are [going on about]… nostalgia, about red state Democrats [as an endangered species]. If it comes at the expense of being honest to voters, what's it worth, really? I mean, they have to make a choice when they get elected; they're either gonna vote yes, or they're gonna vote no."

O'Keefe said some of the issues that politicians and staffers were caught talking out of both sides of their mouths about were the key battleground issues in these states, such as gun rights, abortion and support for then-nominee for the US Supreme Court Brett Kavanaugh.

The journalist compared his work to that done by comedian Sacha Baron Cohen, whose mockumentary "Who is America?" that broadcast on the Showtime network this past summer similarly filmed conservative politicians undercover being provoked into saying or doing embarrassing things — this time for the mocking laughter it would provoke among viewers.