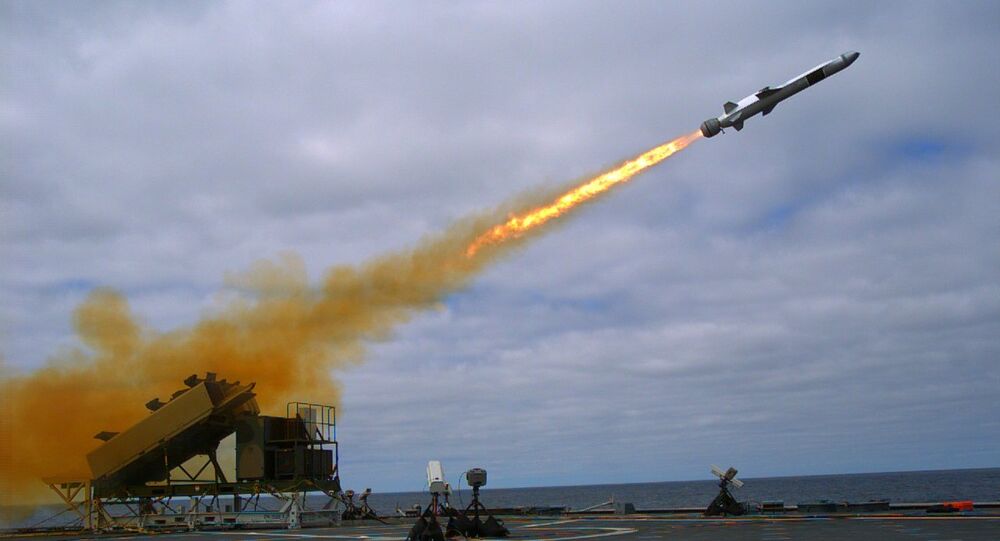 BRUSSELS (Sputnik) - The European Union will have to buy more US weapons and succumb to President Donald Trump's demand to increase payments to the NATO budget in a bid to dissuade him from pulling out of the Intermediate-Range Nuclear Forces (INF) Treaty, members of the EU Parliament told Sputnik.

Trump announced on Saturday that the United States would "terminate" the INF treaty, claiming that Russia had not honored the agreement. Kremlin spokesman Dmitry Peskov strongly rejected the US accusations and warned that scrapping the treaty would force Russia to take measures to ensure its security. Several EU countries, such as France, Germany, Austria, Italy, and Spain, similarly expressed their concerns over possible ramifications of the termination of the treaty, viewed as a pillar of the Euro-Atlantic security.

According to Mario Borghezio, a European Parliament member from Italy’s Lega party, EU nations, while seeking to keep Trump from pulling out of the keynote security treaty, will be forced to increase their NATO contributions and step up their orders for the US defense industry.

"It is likely that the European nuclear powers, France and Great Britain, will press on Trump to make him change his mind, but Europe will have to meet his demands to spend more on defense (at least 2 percent of GDP per year for all NATO countries) and to increase orders to the American war industry," Borghezio told Sputnik.

© AP Photo / Zha Chunming
Real 'Wildcard' in US Move on INF Treaty is China - Pundit
Jean-Luc Schaffhauser, a European Parliament member from the French National Rally party (RN), in turn, noted that the situation around the INF treaty only exposed an impasse the European security had stuck in, given the unpredictability of the United States as its traditional guarantor and a divide within the European Union itself over the US move.

READ MORE: Poland Hasn't Decided Yet to Deploy Rockets on Its Territory Within INF Scope

"The European nuclear powers have had opposite reactions: London is with Trump, Paris is against him. This opposition shows the impossibility of having a common European defense. But the unpredictability of Trump also shows the stalemate in Europe's defense of outsourcing to NATO, which is dominated by the Americans. The defense must be national or it is not," Schaffhauser told Sputnik.

Both lawmakers noted that Trump’s move had not come as a surprise as previous US administrations similarly claimed that Moscow had not adhered to the treaty, with Schaffhauser adding that Washington has failed to show credible evidence.

"Every year since 2014, the State Department has concluded in its annual report on compliance with disarmament agreements that Russia is not respecting the INF Treaty. Each time Russia replied that the United States did not provide details of the alleged missiles and that it does not violate the treaty. It is true that the US reports are poor in detail and that the statements are based on an assessment of the intelligence services and not on concrete evidence. It is not even clear whether the US accusations are about cruise missiles or ballistic missiles," he pointed out.

Borghezio, in turn, noted that Russia’s deployment of Iskander-M mobile missile systems in Kaliningrad was actually a response to the elements of the US global anti-missile defense system in Europe, some of which considered by Moscow as potentially non-compliant with the treaty.

"Undoubtedly, the new Russian missiles, also located in Kaliningrad [which Washington claims may be a violation of the INF treaty], constitute an important tactical-strategic evolution, but we must not forget that they are a clear response to the launch of the 'anti-missile shield' that the US is deploying in Poland and the Czech Republic with very advanced missiles and radars, capable of deeply probing Russian airspace. In any case, [then-President Barack] Obama already in 2014 had threatened to exit from the treaty due to the Russian tests on the R-500 missiles," the lawmaker said.

"There is no doubt that Trump's approach has a major symbolism, as the treaty was signed at the end of the Cold War. On the other hand, Trump's tactic is often to denounce an agreement to propose another, as shown by the recent signing of a Canada-Mexico-USA free trade agreement just four months after a tough dispute with Canada at the G7 in Quebec, and after long years of verbal denunciations by Trump of [NAFTA] that this new agreement replaces," Schaffhauser said.

Borghezio similarly suggested that Trump’s goal was to negotiate a new treaty that would also include China.

"President Trump is trying to launch new talks and engage to others, in addition to Moscow, including Beijing, which is currently free from any constraint in developing missiles with short, medium and long-range capabilities," he noted.

Borghezio, however, added that "great powers have no interest in creating a new Cold War climate," apparently meaning that the sides would continue seeking a solution to the current situation not to put the world peace at risk.