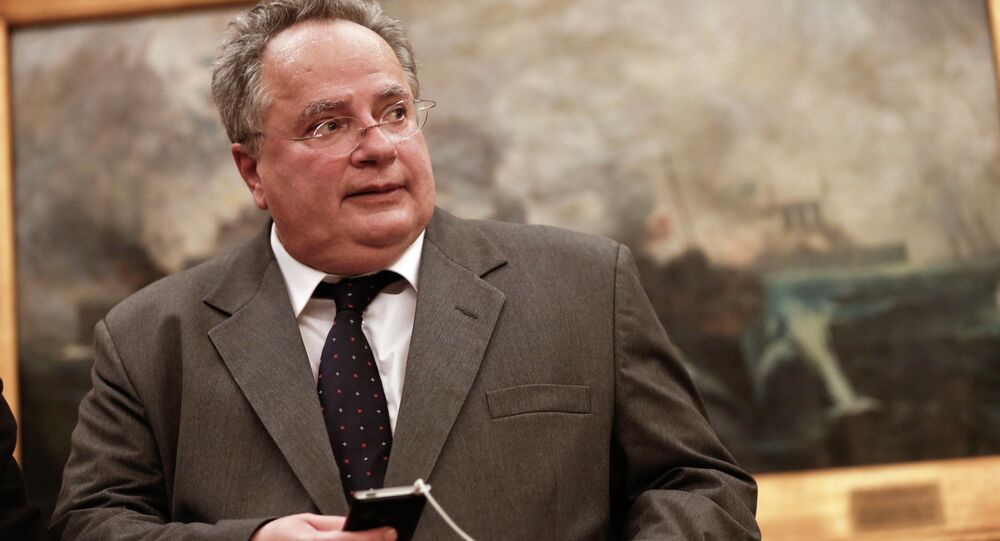 In an unexpected turn of events, Greek foreign minister Nikos Kotzias resigned from his post on October 17 after a major row with other cabinet members, fomenting speculation about Greece's inner political workings and relationship to the Prespa Treaty with the Former Yugoslav Republic of Macedonia (FYROM).

Sputnik spoke with Alexander Kazamias, Senior Lecturer in Politics at Coventry University and former visiting research fellow at both Princeton and Edinburgh University, to uncover the political dynamics of Kotzias's resignation.

He also said that the defense minister opposed Greece's Prespa Treaty with the Former Yugoslav Republic of Macedonia (FYROM), stating that it was Kotzias's primary diplomatic initiative with Tsipras to lift "Greece's veto on FYROM's accession to NATO in return for insufficient concessions such as changing FYROM's name and constitutional amendments to remove explicit irredentist claims."

Defense Minister Kammenos visited Washington a week earlier to present his "Plan B" for the Prespa Treaty, Dr. Kazamias stated, which proposed a defense pact between Greece and its Balkan neighbors in addition to establishing US military bases across northern Greece, which Kotzias and Syriza strongly opposed.

© AP Photo / Burhan Ozbilici, File
Greece, US Discuss Creation of Air Base on Karpathos to Deploy Patriot Systems - Reports
"In other words, Kotzias had good reasons to complain," Prof. Kazamias stated. "But the surprise was that Tsipras, instead of backing him, isolated Kotzias and then readily accepted his resignation."

Kammenos had parliamentary support because "he could bring the government down, whereas Kotzias could not," Prof. Kazamias stated, but stressed that Tsipras could have done the same over the past four years "to keep both ministers on board".

"Kammenos no longer controls all his MPs," he said. "So, Tsipras's decision to push Kotzias for the Prespa Treaty at a critical juncture must be linked to older disagreements that have now come to a head."

Professor Kazamias also highlighted Tsipras's "disaffection with Kotzias's handling of the diplomatic crisis with Moscow last summer", where Greece expelled two Russian diplomats and refused entry to two additional ones "based on allegations that they were plotting to subvert the Prespa Treaty."

"Although Tsipras sanctioned the policy, which according to a recent New York Times report was backed by the US embassy, he was apparently displeased with Kotzias's tactless statements at the time."

"Since September, Tsipras has been trying to reduce tensions with Moscow and days before Kotzias's resignation, the Kremlin confirmed that its older invitation to the Greek PM to visit Moscow stands," Dr. Kazamias explained. He added that preparations for the visit in December were assigned to alternate foreign minister George Katrougalos "who holds friendlier views about Russia".

"Other reports claim Kotzias's unpublished resignation letter also named 'relations with Russia' and 'the Prespa Treaty' as two of three areas where he felt he lost Tsipras's support," he said.

Professor Kazamias claims that internally, "Kotzias' resignation underscores the already weak position of the Tsipras Government" and exposes shortcomings within its core policymaking team, slamming Tsipras's decision to let Kotzias go at such an inappropriate time.

"Tsipras appointed himself as new Foreign Minister, to stress, as he said, that 'he will not tolerate more double language'," Prof. Kazamias said, adding that Tsipras himself has been using double-speak himself as Prime Minister and that "it is usually spoken better when one person is in charge."

He lambasted Tsipras for being the grandmaster of double-speak since "he performed his historic U-turn [in] 2015 where he broke his promises about ending austerity, sending the Troika home, claiming Germany's unpaid wartime indemnities and loans to Greece, and many more."

Other Global Players and Their Effects on Greek Politics

Prof. Kazamias stressed that since 2015 Tsipras, Kammenos and Kotzias have been together facilitating "Washington's policy in Southeast Europe", adding that the Syriza-led Greek government follow an approach wholly dependent on the 'Washington-Berlin-Tel Aviv' triangle.

Kotzias, who sells the Prespa Treaty as a supposed exemplar of how Balkan nationalism can be transcended to promote world peace [has] been otherwise adept at exploiting the downturn in US-Turkish relations to pursue a nationalist policy toward Turkey," Prof. Kazamias said.

"The outcome is that, since early 2018, cross-border incidents in the Aegean and Thrace have multiplied to levels unseen since the Greek-Turkish rapprochement of the late 1990s."

Dr. Kazamias referenced that on the same day as Kotzias's resignation, a Greek frigate ambushed the Turkish exploration ship Barbaros "in a potentially hot incident, with such conflicts going "back to 1970s, when Turkey began its expansionist claims in the Aegean.

© AP Photo / Boris Grdanoski
NATO, Macedonia Launch Accession Talks as Skopje Gets Closer to Renaming Country
Kazamias asserted that the US fully backs Kotzias's resignation and Tsipras' normalizing relations with Moscow, adding that US president Donald Trump is doing so "mainly to build a diplomatic buffer around the Prespa Treaty whose ratification by FYROM looks increasingly likely."

Professor Kazamias stated that current Russo-Greek tensions have many facets, including the ongoing rift in the Orthodox Church, and that Kotzias was not the primary issue, but Moscow may interpret his removal as a "tactical victory" and "will reciprocate with a friendlier approach to Tsipras".

Following the Prespa Treaty vote in Skopje, the US has been "intervening more heavy-handedly in the domestic affairs of FYROM than Russia" with the same scenario applying to Greece, albeit in a different form.

"Therefore, even Tsipras must have now realized that sparking a full diplomatic crisis with the Kremlin to protect the Prespa Treaty was a thoughtless overreaction," Prof. Kazamias said.

"One should not expect a major change in Greek-Russian relations so long as the Prespa Treaty is alive and NATO expansion is actively promoted by Greece," he stated.

© AP Photo / Boris Grdanoski
US Uses Bribery, Blackmail to Interfere in Macedonia’s Affairs - Moscow
Prof. Kazamias also sharply condemned Tsipras as an "opportunist" and said that the Greek Prime Minister "looks for initiatives that will enable him to both have his cake and eat it" by trying to double-deal between Russia, Turkey, and other regional players like Israel and Saudi Arabia.

There were limits to doing so, as Kotzias "ultimately paid for it with his job" and that Greeks could oust Tsipras in "a matter of months", Prof. Kazamias assured. "In this regard, what he does from now on will be viewed purely from the perspective of its utility after he has gone."

Greece to Expand Territorial Waters to 12 Miles From Coastline