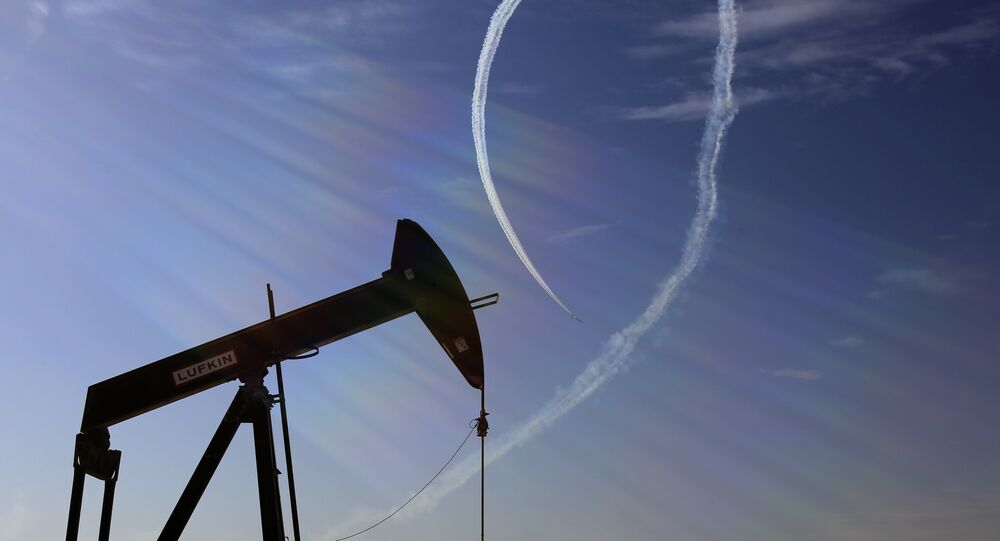 Saudi Oil Output: When Trump Starts to Act Unclear What Will Happen - Consultant

Oil prices are fluctuating as Saudi Arabia has committed itself to playing a responsible role in global energy markets. This comes as Saudi Energy Minister said on Monday that there was no intention to cut the crude supply in retaliation for potential sanctions against the kingdom over the Khashoggi killing.

Sukrit Vijayakar: This is happening because of a combination of reasons. The fact is that there appears to be adequate supply and everyone's saying we will make more supply available.

© AP Photo / JOHN MOORE
US Democratic Senator Urges Ban on Saudi Oil Imports as White House Cautious About Sanctions
Having said that, nobody knows what is going to happen when the Iranian sanctions are actually implemented. Khashoggi is creating some amount of worry because if the US levies sanctions and the Saudis levy sanctions back, nobody knows what will happen.

The traders' policy seems to be "be long or be wrong." That's what seems to be happening; traders are booking profits and resetting their positions.

Sputnik: Do you think that this is the result of the Khashoggi controversy?

Sukrit Vijayakar: Khashoggi controversy is what is providing added support because if the US levies sanctions on Saudi Arabia and Saudi Arabia has said that it will not react but it might react.

You don't know what will happen once President Trump gets into action. He has been getting into action on almost everything under the sun, with little or no respect for any past agreements.

Sputnik: Is this going to play a role in the price of oil, in the oil markets, in the near future or is this going to be a very brief factor that we're going to see disappearing?

Sukrit Vijayakar: My personal sense is that it's going to be brief because if the Saudis resist, it will cut back on production, then the US will possibly counter by allowing more countries exemptions when importing [their] oil from Iran.

Sputnik: Can you comment on the effects of the Iranian sanctions that are kicking in in a couple of weeks? What are we going to see in the way of pricing once that significant factor does kick in?

Sukrit Vijayakar: In the absence of anything happening to Saudi Arabia, I see oil between $75 and $80 per barrel over the next couple of weeks.

© AP Photo / Hasan Jamali, File
OPEC-Non-OPEC States Ready to Boost Oil Output - Saudi Minister
Once the Iranian sanctions kick in, people will actually get to see what will happen as a result of the Iranian sanctions. My sense is that no refiner has ever been found wanting for a cargo of crude oil any time he wanted it.

The market seems to be fairly adequately supplied, as OPEC has been interesting. Once that becomes clear then markets might proceed further down towards $70 a barrel. It's entirely dependent on geopolitical stability.

If someone does something unexpected then all bets are off. The markets are very nervous for the time, which is why they're unwilling to scale down their long positions.

READ MORE: Why $100 per Barrel Oil Prices Aren't Good for Anybody, Including Russia