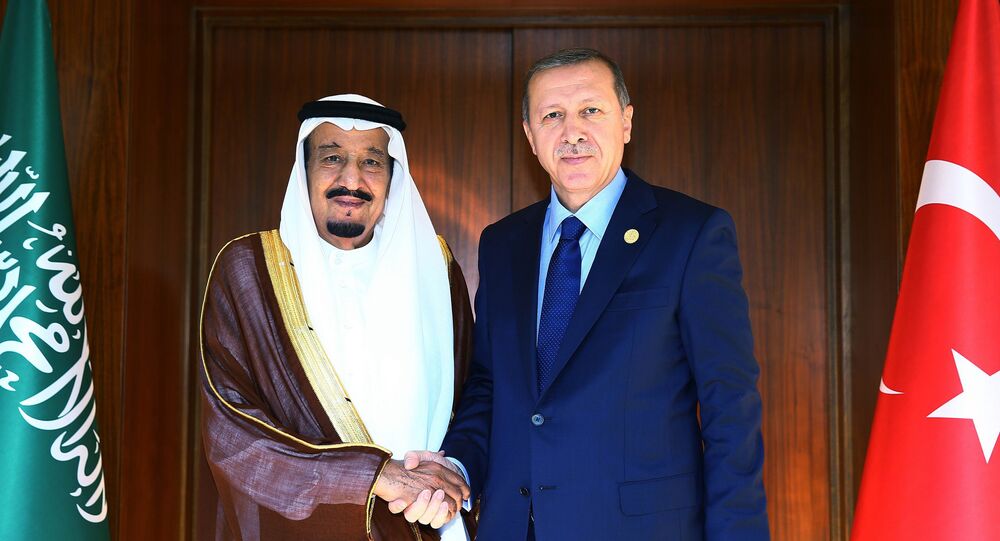 The pace of development of the Jamal Khashoggi affair has quickened in the last few days, as important revelations about his murder and dismemberment in the Saudi embassy earlier this month and the subsequent cover-up come to light. An expert told Sputnik the expose could permanently damage the Saudi monarchy’s reputation.

Turkish President Recep Tayyip Erdogan dropped a bombshell on Tuesday, telling the Turkish Parliament in Ankara that there were strong signs that the killing of Khashoggi, a Saudi journalist and US resident, was planned in advance, and that he was murdered in a "savage way."

Bizarrely, Erdogan claimed, in direct contradiction to what Turkey's Patriotic Party (VATAN) leader Dogu Perincek said earlier that day, that Khashoggi's body was nowhere to be found. Perincek told Sputnik Tuesday, "Reliable sources from the Istanbul security service told me that the body of Khashoggi was found in a well, which is located in a garden in the residence of the Saudi consul general."

Meanwhile, US Secretary of State Mike Pompeo said Tuesday the State Department was revoking the visas of the Saudis implicated in the Saudi journalist's killing, intending to impose "global Magnitsky" Act sanctions on them in conjunction with the Treasury Department. The motion mirrors the 2012 actions taken by the US after the 2009 death of Russian tax accountant Sergei Magnitsky, when the US imposed sanctions, including barring entry to the US and freezing financial assets, on Russian officials suspected by the US of having been involved in Magnitsky's death.

US President Donald Trump, though, was a little more liberal with his tongue, calling Saudi Arabia's handling of Khashoggi's murder "one of the worst in the history of cover-ups."

Radio Sputnik's Loud & Clear spoke with professor Mohammad Marandi, an expert on American studies and postcolonial literature who teaches at the University of Tehran, about the latest developments in the Khashoggi affair.

https://www.spreaker.com/user/radiosputnik/turkey-saudi-arabia-the-geopolitics-of-a
Marandi noted that Erdogan's speech was notable in that he rejected any notion of a "fall guy" and insisted the 18 Saudi suspects be interrogated in Turkey and because he addressed his remarks to Saudi King Salman bin Abdulaziz al-Saud himself, avoiding Crown Prince Mohammed bin Salman (MBS) entirely, who is seen as the power behind the Saudi throne.
© REUTERS / Murad Sezer
Mnuchin Meets Saudi Crown Prince in Riyadh Amid Controversy Over Khashoggi Death

Erdogan has a bone to pick with Mohammed bin Salman in particular for a number of reasons, Marandi told hosts John Kiriakou and Brian Becker.

"It's important to keep in mind that Mohammed bin Salman is very central to [White House adviser Jared] Kushner's or Trump's so-called ‘deal of the century.' He is allegedly supposed to put pressure on the Palestinians so they will relinquish their rights as an independent nation. Some believe that the recent move to prevent Palestinian refugees in Lebanon from getting visas to go [to Mecca, Saudi Arabia] to pilgrimage, that this is somehow linked to that broader deal. I don't know, but he is very close to the Israelis, to Kushner and to Trump on this."

"And also, he supported the [July 16, 2016] coup [against the Turkish government]. The Saudi regime, on the night of the coup in Turkey, was very hostile towards the Erdogan government; they were basically celebrating the overthrow of the elected government in Turkey, and only 16 hours after the coup was declared as defeated, the Saudis came out with a statement saying they support the legitimate government in Turkey. And of course the Emiratis are just as hateful toward the Turkish government. There have been emails that have been leaked showing their role in antagonizing Turkey and in their support for the coup — emails that apparently the Qatari government helped to discover. So there is a great deal of antagonism and hostility," Marandi said.

"One thing that has not been discussed much in the media is that during the last couple of weeks, the Turkish media has been very effective in tearing apart MBS. The Saudi and Emirati media have been attacking Turkey relentlessly, especially for the first couple weeks."

"Qatar has been supporting the Muslim Brotherhood, especially after the so-called ‘Arab Spring' or awakening that we saw in 2011, and this was an issue which caused conflict with Saudi Arabia and with the Emirates, but especially because the Saudis and the Emirates were supporting the reactionary and the despotic regimes across the board. The only place where they did align themselves, unfortunately, sadly — the Saudis, the Emiratis, the Qataris and Turkey — was in supporting extremists in Syria. ISIS [Daesh] were funded by all of these regimes; they aligned themselves in trying to overthrow the Syrian government. That was a point of unity between these governments."

"But gradually, as the Syrian government began to regain territory and other issues began to — I would say the other issues were more important — but the tensions between Qatar and Saudi Arabia and the Emirates began to increase; the cracks between the two sides — meaning the Turks and the Qataris on the one hand and the Saudis and the Emiratis on the other — they began to increase. There was a fallout; that was earlier, and that was managed, but then later on we had another fallout which led to the siege, this ridiculous siege [of Qatar] by Saudi Arabia and its allied small regimes like the Emiratis and Bahrain, which are really very insignificant in themselves. But the siege, which continues until today, has been a huge point of friction between the Saudis and Turkey, because Turkey has put forces into Qatar to protect them against any Saudi incursion."

In that light, Marandi suggested that CIA Director Gina Haspel's visit to Ankara on Monday was intended to shore up MBS' position due to his centrality to US foreign policy in the region.

Marandi said, "What happened in Istanbul changes many things in the Saudi-American-Turkish relationship," upsetting the balance of forces in the region. He predicted Erdogan would use this shift to enhance his position vis-a-vis the Kurds.

The Iranian professor described how Wahhabism, the uniquely repressive and intolerant sect of Sunni Islam favored by the Saudi regime which became the driving force for Islamist militants in Afghanistan and Chechnya, including the Taliban and al-Qaeda, was an ideology fanned deliberately and shrewdly by the United States and its sponsorship of the Saudi regime to sow division across the region. Both the sect's founder, 17th-century cleric Mohammed ibn abd al-Wahhab, and the al-Saud family hail from the remote desert region of Najd in the central Arabian peninsula. Wahhabism only grew outside of Najd when Saudi power grew in the 1930s, and militant Sunnis left the kingdom to fight in other conflicts the US was engaged in due to the Cold War.

"I think that a lot depends on what the Turks reveal in the coming days," Marandi said, noting that the Turks have masterfully released information at a slow rate, ensuring that outrage at the Saudi regime stays on people's minds, and the egg staying on the Saudis' faces for weeks "hurts MBS even more."