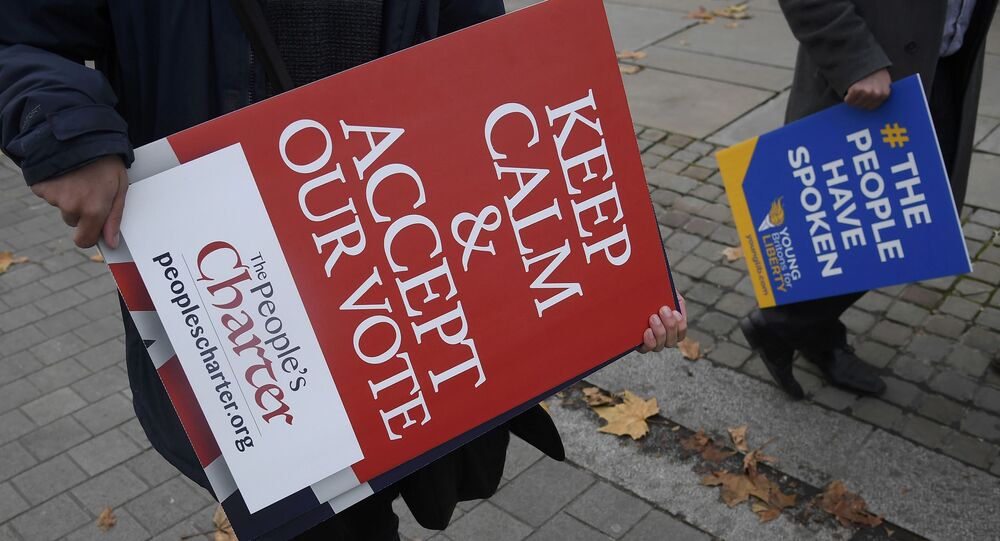 Brexiteers Could Be Afraid to Drive UK to Second Referendum - Professor

UK Prime Minister Theresa May has said she is ready to explore every possible option to break the impasse in Brexit talks. Do you believe Theresa May's claim? Is the EU on board with this and how much support is there?

Speaking to MPs in the House of Commons on Monday, the Prime Minister said that ninety-five percent of the terms of exit were agreed but the Irish border was still a considerable sticking point. Sputnik has discussed Theresa May's statement with Gavin Barrett, Jean Monnet Professor of European Constitutional and Economic Law at the University College Dublin.

Gavin Barret: Well, I think one needs first of all to remember that the withdrawal agreement is actually only a part of the overall deal that the UK and the European Union will have to reach.

So, even if we believe Theresa May, it’s 95% of only that’s a half the distance she needs to travel in the negotiations and there is still another agreement of future relationship agreement to negotiate that which will be very detailed and therefore devilishly difficult to secure agreement on.

© Photo : Pixabay
Brexit Extension Period ‘Undesirable’ But Should Remain Option for UK - PM Theresa May (VIDEO)
And I think one needs also to remember that saying that she has reached agreement on 95 % of the issue is like saying that a couple buying a house has reached an agreement on 95% of the issues when they settle on the wallpaper and the carpets they are going to, but they still have not actually located the house itself.

And you know the 5 % remaining is probably the most difficult a part of the lot. And how capable she is of reaching agreement on the remaining part is quite difficult to say. And if she gets a deal I think with the European Union and gets it before Parliament then she may well win out I think and get her agreement ratified.

But the difficulty is that getting to a Parliamentary vote may actually prove difficult and the European Union is insisting on frictionless Northern Irish border and there are only two routes to do that: Customs Union for the whole EU and alignment of import and free movement of goods route.

© AP Photo / Simon Dawson
Brexit Deal 95% Ready, May Set to Say Amid Rumored "Coup" in UK Conservative Party - Report
And the EU so far saying no to that. And the customs Union for Northern Ireland under alignment of import and free movement of the goods route just for Northern Ireland. But various parties within the British Parliament are saying no to that, including the ouster Democratic Unionist Party on whom Theresa May depends for support.

Sputnik: What do you like of the recent reports that Sadiq Khan the Mayor of London has sent a message to the EU saying that he believes that Labour will be forced to oppose what he is calling a bad Brexit deal that’s emerging from their negotiations with Theresa May, and this comes right before the meeting with, you know, Michel Barnier?

Gavin Barret: Yes, well, the Labour Party has been quite political in its reaction to the whole Brexit debates and in trying to really to cooperate very much to rescue Theresa May from her own extremist backbenchers and actually some of whom would appeal to a catastrophic option of a no-deal Brexit with the European Union.

So, you know, Theresa May would be able to get past that if the Labour Party were willing to lend some support out of its more moderate members to her. But they’ve proven by and large pretty unwilling to do that and Jeremy Corbyn the Labour party leader has expressed the view for a long time that no matter what deal she comes back with, they are going to oppose it.

© AFP 2021 / Ben Stansall
Theresa May 'Drinking in Last Chance Saloon', MPs Warn as Brexit Pressure Grows
So, that really makes life very difficult indeed. I think what Jeremy Corbyn would like to do is to see the Conservative government fall, to take over as Prime Minister himself and then agree to a more moderate deal himself. But he doesn’t seem to be showing himself inclined to lend support to Theresa May to actually get a more moderate deal through.

Sputnik: And there is actually been reports that nearly 80 pro-EU conservatives would actually vote down anything that May brings back from Brussels because they want a new referendum. What are your thoughts on that? Of course, there have been some movements, some people’s movements, there are marches now and I think that as the prospect of perhaps having a no-deal Brexit becomes more and more realistic many people are saying we don’t want that for sure, you know. So, what can you say with that sentiment?

Gavin Barret: That’s true. Yes, they had a colossal march in London there and at least 570 thousand people marched. Some estimates had the number around 700 thousand people. So using any of those figures, we had the first or second biggest political march in British history and after the anti-Iraq War protest of a few years ago.

But the difficulty is seeing how referendum legislation will get through because in fact both party leaders I think would be opposed to a second vote. So, it’s not easy to see how the legislation would get past and Theresa May herself ruled that out in her speech to the British Parliament. And Jeremy Corbyn has also indicated that he is not in favor of that either.

© REUTERS / Hannah McKay
UK’s Brexit Minister Limits Extending Transition to Few Months
He would prefer fresh elections which would be quite likely to see him voted into power. Now, if there is a failure to reach an agreement, you know that is if Britain ends up with no-deal Brexit at the end of the day, I think the economic consequences are so disastrous that the temptation to have a second referendum would be quite large. But on the other hand what might happen might be that you might just end with a general election rather than a referendum.

So, I don’t think I would be betting on a second vote, although ironically I think a second vote rejecting Brexit altogether would probably be the best option for Britain. But I would not be so sure if I can see that happening.

Views and opinions expressed in this article are those of Gavin Barrett and do not necessarily reflect those of Sputnik.