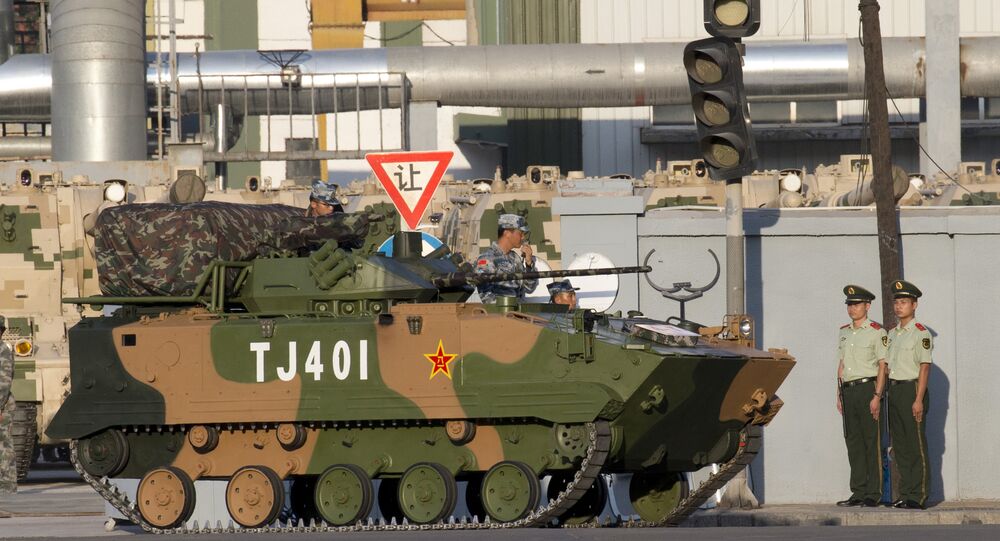 MOSCOW (Sputnik), Tommy Yang - US President’s statement that China should sign up to the Intermediate-Range Nuclear Forces (INF) Treaty could signify growing military strength of the Asian country, as Beijing was not invited to be part of the agreement when it was reached in 1987, experts told Sputnik.

In addition to blaming Russia for alleged violations of the INF Treaty while justifying his decision to withdraw from the deal, Trump singled out China for not being subject to similar restrictions.

"We have paid attention to the relevant statement made by US President Donald Trump and his adviser John Bolton regarding China in the context of the INF Treaty … China has always adhered to the defensive nature of its national defense policy and protects its own state interests. China will not tolerate any blackmail from any country," she said.

"The United States has never tried to negotiate China in terms of reduction of nuclear warheads or carrier missiles. It’ll have negative impact on China, if we also have to join a future arms reduction treaty. But on the flip side, this is also a sign of rising military strength for China. Finally, the United States seems to be willing to negotiate with China on restricting intermediate-range missiles. China has never been invited to such negotiations before. From this perspective, it’s a sign of China’s rise," Ni Lexiong, a military expert at the University of Politics and Law in Shanghai, told Sputnik.

The Chinese scholar added that Trump could also intend to drive a wedge between China and Russia, as Moscow could be under pressure to convince Beijing to join the arms reduction deal to save it.

"It has been over 40 years since China started to deploy intermediate-range missiles in the 1970s. Why the United States started to bring it up today? That’s because China’s DF-21 missiles, with a range of 1,500-2,000 kilometers (932-1,243 miles), are specifically targeting US aircraft carriers deployed in the West Pacific region to prevent them from intervening in possible military conflicts in the Taiwan Strait or the South China Sea. For China, it’s part of a defensive strategy. For the United States, it has become a threat," Yuan Jingdong, an associate professor specializing in Chinese defense and foreign policy, and global and regional arms control issues at the University of Sydney, told Sputnik.

© AP Photo / Lt. j.g. Matthew Daniels/U.S. Navy
China Will Not Tolerate Blackmail on Joining INF Treaty
The expert noted that the United States lacks adequate deterrence to protect its warships against threats from Chinese missiles, due to restrictions under the INF Treaty that prohibits development of ground-launched nuclear missiles with a range of 500 to 5,500 kilometers.

He also said that "the United States doesn’t have missiles with suitable ranges that can be used in the Pacific Theater in case of a military conflict, and they don’t have missiles that can match the range and capabilities of Chinese missiles deployed in the region, because of prohibitions under the INF Treaty."

Such deficiency in missile capabilities could also hurt the confidence regional allies have in the US military, Professor Yuan added.

"When US aircraft carriers try to intervene in possible military conflicts in the West Pacific region or if its allies in the region require assistance, they have to take the threats from Chinese missiles into consideration. It could also lead to its allies start to lose faith in the US military’s capabilities in offering protection and deterrence. The United States does not want to see its regional allies start to develop their own nuclear capabilities," he said.

In recent years, US warships have conducted regular Freedom of Navigation missions in close proximity to disputed islands in the South China Sea, after the United States accused China of escalating tensions in the region by building military installations on those islands.

Even if the United States starts to develop new intermediate-range missiles to deter possible threats from China, it is unlikely for Beijing to engage in an arms race with Washington due to the lessons learned from the collapse of the Soviet Union, Professor Yuan suggested.

"As social development continues to move forward in China, the Chinese government has to meet the increasing demand for social security coverage. This could curb China’s spending on the military, which accounted for about 2 percent of the annual GDP in recent years. China has also learned the lessons from the fall of the Soviet Union, which spent about 20-30 percent of its annual GDP on military expenditures. That’s why some Chinese experts suspected that the United States is trying to lure China into another arms race," he said.

© Sputnik / Vladimir Rodionov
Trump Should Reinforce INF Treaty, Not Destroy It – US Senator
Other military analysts pointed out that China’s overall military strength, especially in terms of the number of nuclear warheads, is still way behind that of the United States.

In addition, Carlyle Thayer, emeritus professor at the Australian Defense Force Academy in Canberra, told Sputnik that for China to take part in future arms reductions talks, "the United States would have to first cut down its nuclear arsenal similar to China’s [arsenal] size."

According to figures from the International Campaign to Abolish Nuclear Weapons (ICAN), China has about 270 nuclear warheads, while a number of nuclear warheads in the US arsenal could reach as much as 6,800.