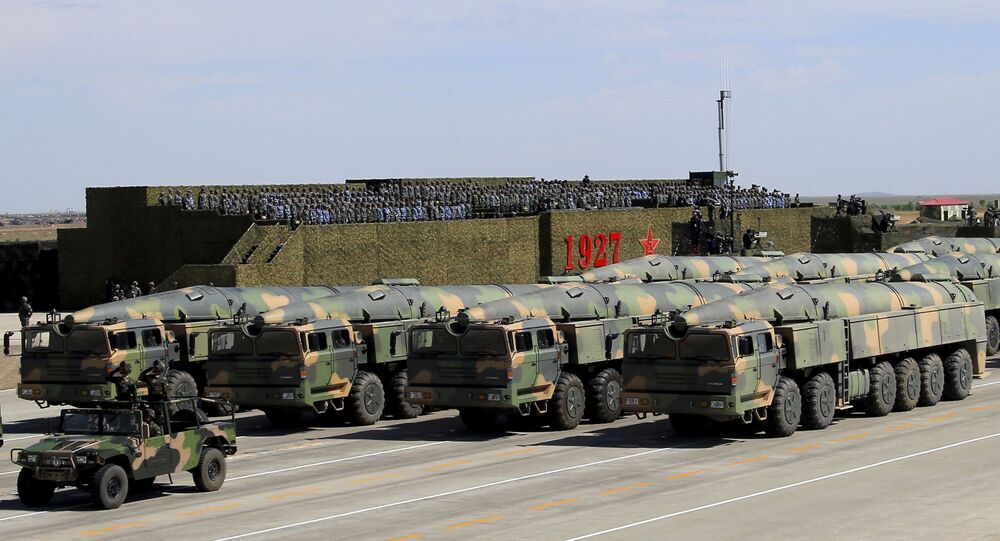 Washington's potential withdrawal from the 1987 Intermediate-Range Nuclear Forces (INF) Treaty is fraught with risks and is aimed against both Russia and China, military observers told Sputnik, adding that Trump's attempt to use Beijing's missile program as a justification for the pullout does not hold water.

"The INF Treaty was at one time a limiter and barrier to the arms race between the United States and the Soviet Union, Russia's predecessor," Yang told Sputnik China. "The United States' unilateral withdrawal [from the agreement] means that they will not be controlled by anyone in this sphere and will make arbitrary decisions. The reason why the United States often 'backpedals' is that it cannot control its strategic competitors at its sole discretion — it is not allowed to do this by international mechanisms and agreements."

The question then arises as to why Washington links China to the INF Treaty issue.

© Sputnik / Press Service of the Office of the Russian Security Council
Patrushev Meets With Bolton, Discuss INF Treaty Amid US Plans to Exit It
The Chinese scholar noted that the US had identified China and Russia as its major strategic rivals: "Citing numerous problems related to economics and security, the US is labeling China as a culprit," Yang opined. "By using this anti-China message as a pretext, the United States is trying to get rid of all restrictions with regard to security control and the arms race."

According to the military analyst, this stance is nothing but a "blatant excuse" and sheer "provocation."

"The Chinese missile program is not related to the INF problem," he said. "China has always had medium-range missiles, because it did not enter into a bilateral treaty with the United States on medium and shorter-range missiles, as well as India, Pakistan and Israel, that, by the way, has a lot of warheads for such missiles, 200-400 warheads, according to various estimates. Therefore, the US' speculations about Chinese missiles are just an excuse."

© Sputnik / Alexandr Vilf
Professor Warns New 'Nuclear Iron Curtain' May Be Created if INF Treaty Scrapped
Commenting on the possible consequences of the US pullout from the INF agreement, Igor Korotchenko, a Russian military expert and editor-in-chief of National Defense Magazine, suggested that the US may deploy "a corresponding class of American weapons" near China's borders.

"We may witness the deployment of these [military] systems in Taiwan, as well as at US military bases in the region," Korotchenko presumed. "From there, they would be able to keep China in the crosshairs. And this would become a new destabilizing outcome of the arms race launched by the US."

According to the military expert, this situation could significantly increase security risks for China. However, he believes that Beijing will find the way out and at least respond to US efforts: "China will not allow the United States to put it in the crosshairs of American missiles," Korothchenko stressed. "Accordingly, adequate countermeasures will be taken [by Beijing]."

On October 20, Donald Trump said that he would withdraw from the INF Treaty, stressing that the US should develop medium-range missiles. He also claimed that Russia was violating the bilateral deal.

Wikimedia Commons / Gage Skidmore
Trump Uses 'America First' Agenda in Annulling INF Treaty - German Lawmaker
"We are going to terminate the agreement and then we are going to develop the weapons" unless Russia and China agree to stop building such missiles, Trump said as quoted by Fox News.

In response, Russian Foreign Minister Sergei Lavrov said that this decision would be opposed by Moscow, specifying that Washington had not launched the procedure for withdrawing from the deal so far.

The US-Russian spat over the INF Treaty started under the Obama administration, however, Trump's predecessor decided to abide by the agreement, concluded between the US and the USSR in 1987.

"The INF Treaty is an important arms control agreement reached by the US and the USSR during the Cold War. This agreement has played an important role in stabilizing international relations, maintaining global strategic balance and stability. Today it is still extremely important," Hua stated at a press briefing on October 22.