Washington's unilateral withdrawal from the INF treaty will have a multilateral negative impact. Earlier, Trump committed to withdraw from the accord citing violations on the part of Moscow.

Sputnik discussed whether President Trump will actually go through with his plan to pull out the US from the treaty with Dr. George Szamuely, political analyst and author of "Bombs for Peace: NATO's Humanitarian War on Yugoslavia."

Sputnik: How high are the chances that President Trump will actually go through with his plan to pull out the US from the treaty?

George Szamuely: Trump has never met an agreement that he didn't want to pull out of. This has been an ongoing thing for some years now that the United States has sought to deploy intermediate range missiles in Europe.

© Sputnik / Press Service of the Office of the Russian Security Council
Patrushev Meets With Bolton, Discuss INF Treaty Amid US Plans to Exit It
And the way to do that was always to get out of the INF treaty. They have been trying to find ways to do it; so under Obama administration they came up with a story that Russia was violating the treaty by developing this new cruise missile. The US has never really provided evidence for this and they've continued to repeat this allegation.

Trump has now come up with a new storyline which is that he wants a global intermediate range missile treaty which includes China, maybe India and Pakistan; and so what he is really doing is withdrawing from this treaty so that we could get this big global treaty off the ground.

Of course, that is just a cover story; what is really behind this is that the US is seeking a major unilateral advantage over Russia by the deployment of these intermediate range missiles in Poland, Romania, in the Baltic countries and maybe even in Ukraine.

Sputnik: We have John Bolton in Moscow; he is supposed to be meeting with Russia's top officials. Do you think anything will come out of these talks? Will they be talking of this withdrawal from the INF do you think?

George Szamuely: They will certainly talking about this, and I'm sure that Bolton will come with some honeyed words saying "Don't get upset and indignant about this. It's all really about the need for a new treaty and for new negotiations which is going to bring everybody into it.

This isn't really directed at you; it's all directed at China. There's nothing to worry about." I don't think that Russian leadership is going to buy any of this. You remember, when the Americans started deploying the ballistic missile defense systems in Eastern Europe, they claimed that it was all directed against Iran; that story has now been quietly forgotten.

© AP Photo / Michael Sohn
INF Treaty: US Just Wants New Deal With Better Conditions - German Left Party
So now, I'm sure that Bolton will come up with a new cover story saying "Don't worry about anything. We're not going to get round deploying any intermediate range missiles; we're just worried about China.

That's what it's all about — China." Russia won't buy any of this for a simple reason that they will say "What's your plan? Are you planning to hold a major international conference involving America, Russia and China? Do you have any proposals for a new INF treaty? What's your goal for updating the INF treaty?"

And, of course, Bolton doesn't have any of that; so, they're not going to buy any honeyed words from Bolton. And doubtless that will come accompanied by some vague invitation for Putin to come visit Washington in the New Year. I don't think that very much will come out of this.

Sputnik: We have this new START agreement signed by Obama and Medvedev in 2010. What are your thoughts are we going to have any new agreement? Are there any possibilities of seeing a new agreement between the US and Russia? Is there a will for that on both sides?

© REUTERS / JONATHAN ERNST
Many US Lawmakers Will Support Trump Withdrawing US From INF Treaty - Rubio
That was the understanding when the SALT negotiations began in the 1960-s and culminated in the signing of the first SALT treaty in 1972 and then the subsequent START treaty.

That's very different [on the Russian side], the Russians do want an accommodation and a partnership with the US, but the US doesn't want it. And if the US doesn't want it, there's simply no reason to have any START negotiations. The START treaty is due to expire in a couple of years, in 2021. I don't think that there's going to be any new negotiations launched because who wants it?

Trump doesn't want it and Congress doesn't want it; so I don't think there's going to be anything in the works at all. Within a couple of years we're going to be in a situation for the first time in how many decades of having no arms control agreements on the table at all, no arms control negotiations whatsoever; it's quite a frightening situation.

Sputnik: And then we have the rest of the world as well; we have China and other powers. What's going to happen with them? Japan was also seeing an increased militarization of recent years; where are we heading? 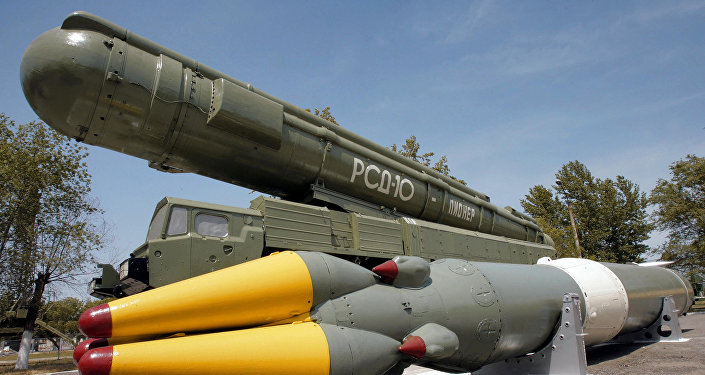 © Sputnik / Anton Denisov
Madrid Worried About US Plans to Pull Out of INF Treaty With Russia - Statement
George Szamuely: I think that the real threat is not so much Japan or China; the real threat is the United States. I think that the United States got it into its head following the end of the Cold War that its victory was due to its own superior military, superior political system and superior moral values.

It believes it's entitled to total domination of the world. And to that end it has to make sure that it has the military powers on every continent to secure that dominance.

Everything that Trump's doing, all of the withdrawals from the arms control agreements, the propaganda about "Russia does this and Russia does that, Russia is so wicked", all of that is just a part of the same thing, of trying to eliminate any possible rival to the US. And this is where the danger lies; I don't think it lies in China, India, Pakistan or any other minor nuclear power. It's a question of whether there's any way of restraining the United States.