Sputnik asked Shiva Ayyadurai, American entrepreneur and scientist, who is running as an independent candidate in Senate elections in Massachusetts, about his campaign and the recent controversy around Democratic Senator Elizabeth Warren's DNA history.

Sputnik: What do you think was behind Warren decision to obtain own DNA history?

Shiva Ayyadurai: Elizabeth Warren herself has admitted that she took the test due to my relentless campaign to expose her dishonesty. Citizens across Massachusetts have been putting up the sign 'Only a Real Indian Can Defeat the Fake Indian' all over the state. This has induced panic attacks in Warren's campaign and so she took the DNA test which proved she is 99.99% White. 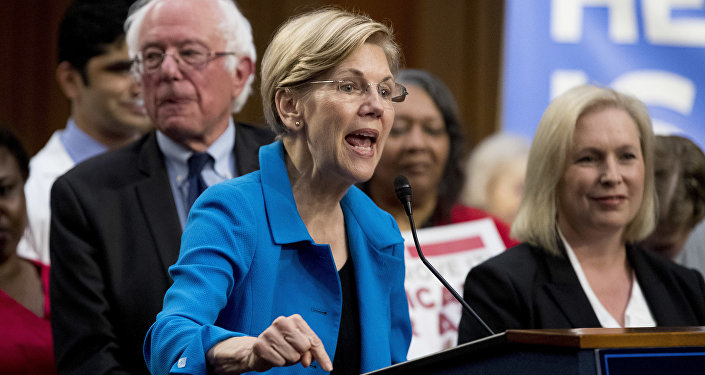 © AP Photo / AP Photo/Andrew Harnik
US Senator Proves Native Descent, Trump Denies Promising $1M to Charity if She Did
Sputnik: Why do you think Elizabeth Warren regularly remind everyone about her Cherokee ancestry?

Shiva Ayyadurai: That is the only qualification she could claim in order to bamboozle minorities and people of color into thinking she stands for them. The fact is Harvard has been completely involved in this bamboozling. She and Harvard should pay reparations to Cherokee people, at least 99.99% of the money she has earned from this fraud.

Shiva Ayyadurai: It is completely affecting her Senate chances right now. The incredible hard work of thousands of our volunteers in exposing this fraud has seriously affected her lack of integrity. The DNA test proves that she has been fooling the people all along which is what I have been saying. This is not the quality the people want in a president. Her ancestry is not the only area in which she has been fooling the people. She is part of the not-so-obvious establishment. She lobbied the federal government to purchase poor quality equipment of Weapons Contractors that had already been rejected. She supports Goldman Sachs and their policy that destroyed Community Banks. She voted three times for Monsanto — one time to protect them from lawsuits, one time against GMO labeling, and one time to set apart funds allocated to FDA for use in pro-GMO propaganda. She is part of the Military-Industrial-Academic Complex. By the way, she is not even 1/1024th Cherokee, this is genetic material the origin of which we know nothing.

© Sputnik / Ruslan Krivobok
US Judge Upholds Assault Weapons Ban in US State of Massachusetts - Court Filing
Sputnik: What was behind your decision to run as independent candidate?

Shiva Ayyadurai: We have one party with two faces, both of which are racist. Racism is about something far more insidious than color - it's about constraining/censoring/obliterating/making invisible the diversity of ideas and the fullness of the human experience — to homogenize (white-ize) them so they can be controlled and maintained for political and economic gain — that is the racism I'm talking about — a racism, you and your folks at the State House — in the racist sewer of MA politics never want to discuss.

Charlie Baker is in bed with Elizabeth Warren and they have set up a designated loser pretending to be a pro-Trump candidate so that they can maintain the facade of a two-party system with Massachusetts being a "safe blue state." I saw through their games and decided that they needed to be smashed from the outside instead of playing along with their rigged system.

Sputnik: How are you dealing with outsider status especially without any party affiliation?

Shiva Ayyadurai: As you can see, Elizabeth Warren and her racist stooges in WBZ, Boston Globe and UMAss don't want the dark-skinned MIT guy with four degrees who has real solutions to real problems on the debate stage. They are a bunch of insiders who have no solution but thrive by creating problems. We have been enormously successful as "outsiders" because our views represent 60% of Massachusetts people who are independent and don't care about the two party oligarchy. The real question is how Elizabeth Warren is dealing the scepter of a Darkie getting onto the debate stage.

© Sputnik / Natalia Seliverstova
Russian-US Relations Likely to Be Sacrificed During US Midterms, Kremlin Says
Sputnik: What are the main issues you talk about?

Shiva Ayyadurai: I have an innovative solution to ensure free-speech by re-engineering the US postal service for the 21st century to provide all Americans a platform for private and protected communication. I have an innovative solution to reduce health care costs from $10,000 per worker to $2,500 per worker. Finally, I will go after companies like Monsanto which have destroyed our food supply risking our children to all sorts of diseases. Finally, we need to tax Harvard and other large universities to build vo-tech schools in inner cities.