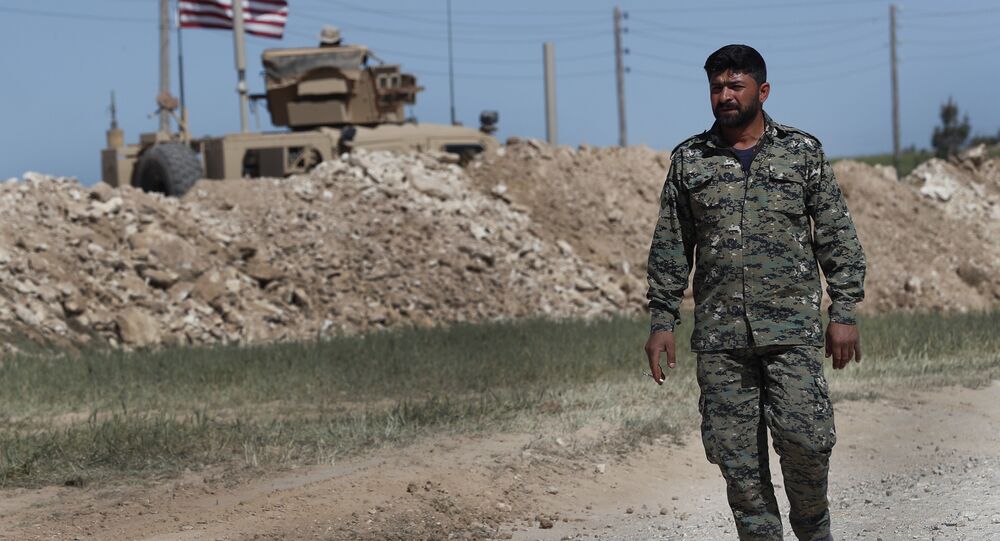 The US is continuing its military buildup in Manbij in response to Turkish President Recep Tayyip Erdogan's threats to clear the region of Syrian Kurds. Speaking on condition of anonymity to Sputnik, a Manbij Military Council representative disclosed that the US has sent heavy arms to the region.

A source close to the Syrian Democratic Forces (SDF) told Sputnik Turkey that the US had started beefing up their military presence in Manbij and sent weaponry to the region in response to Ankara's signals about a potential operation in the city, located in the northeast of Aleppo Governorate.

"The US is strengthening its position in the region after Turkey's announcement of a possible operation in Manbij," a Manbij Military Council representative told Sputnik on condition of anonymity. "The Americans have increased the number of their bases in the region from 2 to 4, and have also boosted the amount of assistance provided to us. Trucks loaded with armored vehicles and heavy weapons were sent here yesterday."

"The US supplies us with weapons on an as-needed basis," the council representative explained. "We are forced to take tightened security measures and intend to continue countering any threat posed by Turkey, the Free Syrian Army (FSA) or Daesh [ISIS/ISIL]* to our region. Therefore, we need more weapons and inform the US and coalition forces about it."

Following the meeting with Pompeo, Cavusoglu specified that Washington agreed that the US-Turkish deal to clear Manbij of the YPG had been postponed.

According to the plan, negotiated by Pompeo and Cavusoglu in June 2018, the YPG should leave Manbij and move east of the Euphrates River.

However, Washington does not appear to be abandoning its Kurdish allies. Earlier, the US secretary of state hailed them as "great partners" while speaking at a conference of the Jewish Institute for National Security of America (JINSA) on October 10.

The Kurdish issue still remains a bone of contention between Ankara and Washington. According to Ankara, the YPG and its political wing, the Democratic Union Party (PYD), are nothing more than affiliates of the Kurdistan Workers' Party (PKK), which is outlawed in Turkey.