China has no motive to meddle in the US elections, either the previous 2016 presidential race or the upcoming midterms, Tom McGregor, a Beijing-based political analyst and senior editor for China's national TV broadcaster CCTV, told Sputnik.

"That's not true and without having to cite a lack of evidence, similar to the case when Democrats were claiming Russians were meddling in 2016 US elections, I can talk about it from the perspective of motives," he emphasized.

McGregor's comment comes in response to Donald Trump's recent claim that the Chinese had interfered in the US election cycle.

"I think China meddled also. And I think, frankly, China… is a bigger problem," the US told CBS's "60 Minutes" host Lesley Stahl on October 14.

Earlier, delivering his speech at the Hudson Institute in Washington DC on 4 October, US Vice President Mike Pence claimed that Beijing had meddled in the 2018 election campaign and was trying to influence the 2020 presidential run.

"China has initiated an unprecedented effort to influence American public opinion, the 2018 elections, and the environment leading into the 2020 presidential election," Pence said. "To put it bluntly, President Trump's leadership is working, and China wants a different American president. China is meddling in America's democracy."

Beijing immediately responded to the vice president's accusations: "This is nothing but speaking on hearsay evidence, confusing right and wrong and creating something out of thin air. The Chinese side is firmly opposed to it," Chinese Foreign Ministry spokesperson Hua Chunying said. 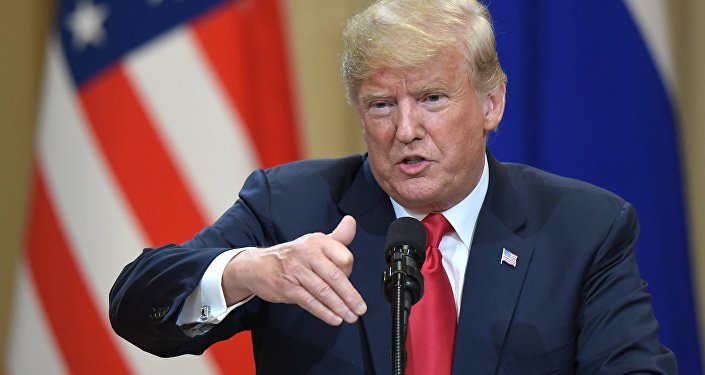 © Sputnik / Sergey Guneev
'A Bigger Problem': Trump Says China Meddled in 2016 Presidential Election
"Beijing has nothing to gain or benefit from helping Democrats retaking control of US Congress and the US Senate," the CCTV commentator underscored.

McGregor described a potential scenario in which the Democrats win the US Congress and kick off an impeachment process against Trump. If they succeed, US Vice President Mike Pence, "an extremist neocon and warmonger," will replace Trump and further crack down on both China and Russia, the CCTV editor presumed.

"Why would the Chinese establishment and government knowing this fate choose to help the Democrats retake the House?" he asked rhetorically. "They are not stupid and self-destructive. They are smart enough to know that it's in their national interests and self-protection to keep Trump in the White House for at least the next two years."

© REUTERS / Hyungwon Kang
Bolton: US Sees China as 'Major Issue' of Century
Commenting on Pence's speech at the Hudson Institute, McGregor explained that the vice president's bellicose stance had triggered fears among ordinary Chinese that the neocon warmongering against Beijing could one day end up in a direct confrontation.

"Many Chinese were freaking, including my Chinese-native wife. She was reading the Chinese-language news on her smartphone and Chinese bloggers had all concluded that if Trump get impeached and Pence becomes President there will be war," he said.

According to the analyst, if the White House officials and US citizens had better understanding of China's domestic matters, they would have never put forward insubstantial claims that Beijing is targeting the American democracy.

China's Secret Weapon: How Beijing Can Wreak Havoc on US Corps in Trade Dispute