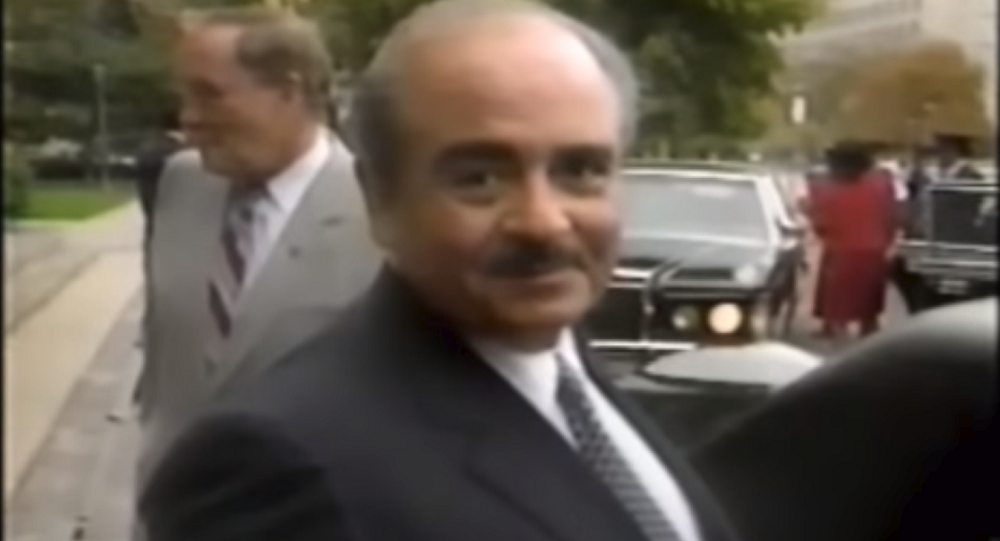 Saudi journalist Jamal Khashoggi, who is feared murdered in the Saudi consulate in Istanbul, was much more than just a Washington Post columnist: he was a figure connected to some of the highest echelons of power in the US and Saudi Arabia.

Whitney Webb, staff writer at MintPress News and author of a recent piece on the disappeared Saudi journalist, joined Radio Sputnik's Fault Lines on Tuesday to flesh out Khashoggi's personal and family history and his deep connections to the military-industrial complex in the United States, as well as the highest levels of the Saudi state, in an effort to understand why the US is reacting so strongly to his presumed death at Saudi hands.

​Noting that the Saudi government has gotten away with the massive death toll of its war in Yemen without much in the way of international condemnation, Webb said that it's odd that they are getting so much flak now: "This one journalist disappears and it's a big problem."

So who's demanding accountability from the Saudis now? Some figures you might not expect, such as Senators Lindsey Graham and Marco Rubio, US politicians who can more typically be found advancing the cause of military interventions and coups d'etat against governments adversarial to the United States.

"I've been their biggest defender on the floor of the United States Senate," Graham, who represents South Carolina, told Fox News Tuesday. "I feel used and abused" by Saudi Arabia. "The MBS figure is, to me, toxic; he can never be a world leader on the world stage."

"It's up to the president [to decide what to do]. I know what I'm gonna do: I'm gonna sanction the hell out of Saudi Arabia. We deal with bad people all the time, but this is in our face… they have nothing but contempt for us," Graham said. "This guy's gotta go. Saudi Arabia, if you're listening, there's a lot of good people you can choose, but MBS has tainted your country and tainted himself."

© Sputnik / Grigoriy Sisoev
Russia, Saudi Arabia Agree on S-400, Other Weapons Deliveries
"The US response is not so much about human rights; it's a complex situation that's bringing a lot of things together," Webb told hosts Lee Stranahan and Garland Nixon. "There's two main issues, in my opinion, that have caused this sudden outrage to appear in the US mainstream. The first is that there are elements in the CIA that want MBS's predecessor, Mohammed bin Nayef, who was crown prince before — they want him to be put back in power because they worked with him in the past, and MBS is seen as [un]predictable and closer to [US President Donald] Trump and [Trump's son in law and adviser, Jared] Kushner and all these people. But the second issue, and the bigger of the two in my opinion, is that the Saudis recently made a decision that put in danger the entire $110 billion weapons deal that Trump has been promoting since last year, because that deal wasn't really a deal at all; it was actually a bunch of letters of intent and letters of interest, and now that the deadlines in some of those deals have come and gone, it's become clear to the US that the Saudis aren't going to buy all $110 billion in weapons that they had previously expressed interest in."

Webb noted that "one of the deadlines that passed was the deadline on Lockheed Martin's THAAD" [Terminal High Altitude Area Defense]. Saudi Arabia agreed in October 2017 to buy seven fire units of the anti-air and anti-missile defense system made by the US defense giant — each composed of a Raytheon AN/TPY-2 radar, two mobile tactical stations (plus two spares) and six launchers (with two spares) — and 360 interceptor missiles. "That deal was supposed to be $15 billion, the deadline was on September 30, the Saudis… just ignored the deadline, meaning they weren't interested, really, and then, two days later, Khashoggi disappears."

Webb noted that the US has been sanctioning countries for buying Russia's low-cost competitor to THAAD, the S-400 Triumf system. China's already been sanctioned and Turkey is being threatened with the same treatment. "Lockheed Martin has lost its edge," she said, "in terms of its products in the market." She gave the example of the F-35 program, "which has been a huge waste of American tax dollars," and how the entire fleet was grounded last week following the first crash of an F-35 in South Carolina. "It's not a good look for Lockheed Martin… the S-400 is considered to be more effective, and it's much cheaper" than THAAD," with National Interest reporting that the S-400 can run as low as $400 million per fire unit. "Obviously Lockheed Martin's THAAD is the worse deal, so what Trump has been doing, as ‘weapons salesman in chief,' has been to pressure other countries using US sanctions and other threats to try and get countries to keep buying Lockheed Martin's system."

"So the Khashoggi affair is being exploited, in my opinion, to try and push the Saudis to buy American, to buy the Lockheed THAAD, because they were going to buy the S-400 last year. The US has continually pressured them to disavow their plans to buy the S-400, and they haven't done it. And then after China was sanctioned for buying the S-400, the Saudi ambassador to Russia said, ‘I hope no one sanctions us because we're buying stuff from Russia.' He didn't say what it was, but the hints in some of the other things he said made it really clear that that was the plan to buy."

Webb noted that "support for the Saudis is bipartisan, by and large, just like support for the military-industrial complex and US wars abroad… so I don't really see [the Democrats] trying to take the moral high ground" with regards to any closeness between Trump and the crown prince.

The journalist also noted that Lockheed Martin was the single largest contributor to Graham's re-election campaign, giving the incumbent $61,700 in 2014, according to Open Secrets.

Webb also noted that Khashoggi's uncle, Adnan Khashoggi, "was a major weapons dealer in the 80s. He was very intimately involved with the Iran-Contra Affair, he donated heavily to Richard Nixon and Ronald Reagan and he was deeply connected to Lockheed Martin," she said, noting that Lockheed's former vice president for marketing called Adnan "for all practical purposes a marketing arm of Lockheed Martin."

"Beyond that, [Jamal] Khashoggi himself was the protege of [Prince] Turki bin Faisal al-Saud. He was the head of Saudi intelligence for 24 years. He was also Saudi ambassador to Washington and to the United Kingdom, and during his ambassadorships, Khashoggi was his ‘media advisor.' Throughout his career, Khashoggi was close to the CIA… because the Saudi intelligence and US intelligence services, they cooperate all the time," which gave him "close access to Osama bin Laden for interviews back in the 90s, and it's really notable to point out that Khashoggi really only became a ‘critic' of the Saudi government — not of the monarchy or anything like that, or the system itself — but he became a critic of the regime only after internal struggles were happening. [Between] King Salman's predecessor, King Abdullah, and Turki bin Faisal al-Saud."

"This hasn't really been covered at all. I mean, Khashoggi now has sort of been rehabilitated in this sense, even by people like [journalist] Chris Hedges, as this courageous dissident who wanted to bring democracy and all this stuff. But it's interesting. Khashoggi has been part of the Muslim Brotherhood since his 20s; in the Arab Spring… he backed all of those regime-change efforts throughout the Middle East [enacted under former US President Barack Obama], and a report that was in Moon of Alabama recently linked to something that I thought was really interesting about how right before his disappearance, Khashoggi was ‘working quietly with intellectuals, reformists and Islamists,' i.e. the Muslim Brotherhood, ‘to launch a group called ‘Democracy for the Arab World Now.'"

Webb noted that the Muslim Brotherhood only came under attack in Saudi Arabia under King Salman, citing its "fall from grace" as originating in the split between Faisal al-Saud and King Abdullah, which is also why Khashoggi sought refuge in Turkey, "because Turkey — Erdogan — supports the Muslim Brotherhood."