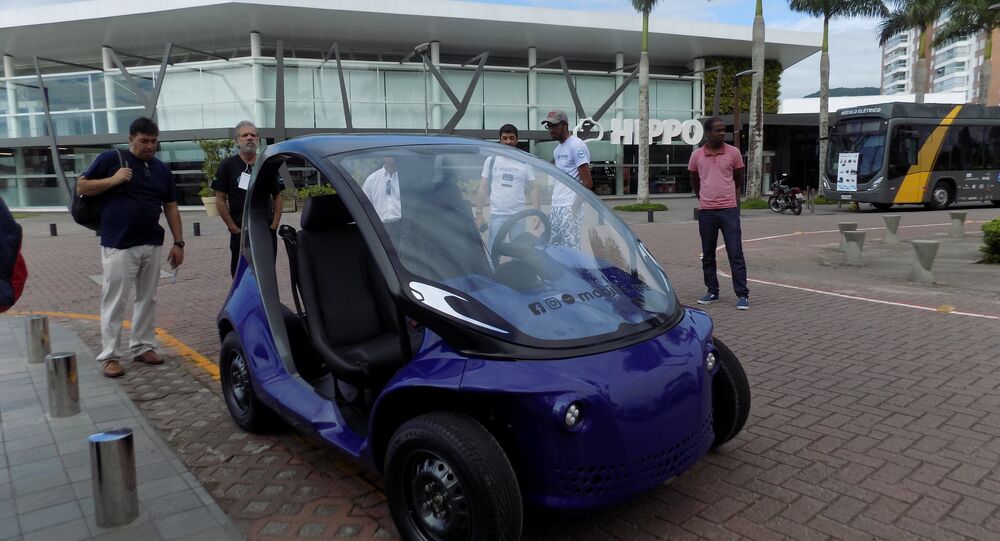 Gas-Free Li: Brazil Plans to Roll Out Electric Car by 2020

According to a startup from Santa Catarina, Brazil’s Mobilis have developed a new electric car that will go on sale no later than 2020. The vehicle, named Li, will be the first electric car manufactured entirely in Brazil.

According to Érico dos Reis, the commercial director of Mobilis, the new vehicle can be recharged at the owner's house and will save its owners up to $4,000 per year.

YouTube/All About AMAZING
Up and Away! WATCH New Canadian Flying Electric Car in Action
“It's a car designed for daily use in the city without depending on the infrastructure and accessibility to electricity. It can be recharged with any plug in the owner's house as if it were a cell phone. The vehicle will save its owners from 12 thousand reals (about $3,000) to 15 thousand reals (about $4,000) per year compared to conventional cars with an internal combustion engine,” Érico dos Reis says.

At the moment, the car is passing tests and absent from regular roads while it waits for the Committee on Brazilian transport and the Brazilian Institute for the Environment and Natural Resources to issue the corresponding licenses for its urban use.

The car is 2.67 meters long and 1.59 meters high. It can transport two passengers. It runs on lithium batteries that guarantee greater autonomy compared to Li’s competitors in China and the USA. Thus, the life of Li’s batteries is ten years, while that of its competitors is merely three.

© CC BY 2.0 / Kārlis Dambrāns / BMW i3 electric car
Qatar to Present Country's 1st Electric Car Ahead of 2022 FIFA World Cup - Official
Apart from easy charging, Li will also be equipped with an advanced interface that, among other things, will allow you to start it simply by entering the owner’s login and password. The expected price of the vehicle is about 65-69 thousand reals ($17-18.2 thousand USD).

“Instead of conventional keys, Li will start with a card when a login and password are entered; the car will provide us with data about the user’s needs, how they drive and what their habits are. Thus the company will be able to determine the ideal time to carry out Li’s maintenance service,” the businessman explained. He also mentioned that the car has an online support system connected to the manufacturer.