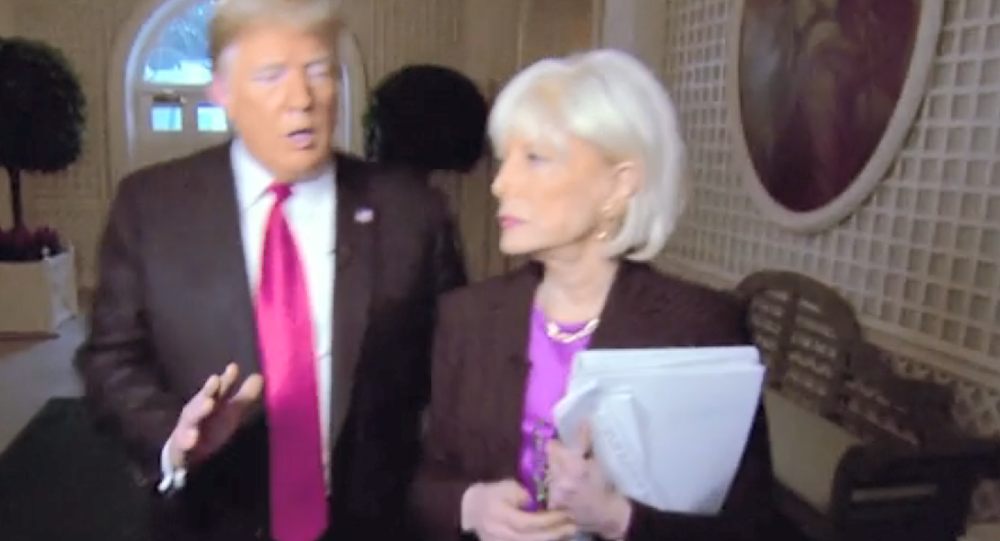 ‘The Worst Kind of Dialogue’: No Winners After CBS’ Trump Interview

On Sunday night, CBS’ “60 Minutes” aired an interview with US President Donald Trump by journalist Lesley Stahl. However, while Trump’s dodgy answers and boorish behavior have drawn ire from the press, Jim Kavanagh, editor of ThePolemicist.net, told Radio Sputnik Monday he couldn’t decide whether Trump or Stahl was worse in this outing.

"The interview epitomizes everything that's wrong with the political dialogue in the United States," Kavanagh told Radio Sputnik's Loud & Clear Monday. "Trump is, of course, all over the place, saying ridiculous things, swinging from one thing to another, and interrupting [Stahl] and not letting her get a lot of questions out coherently. On the other hand, she represents a discourse which is very selectively concerned about certain things, which lets him get away with certain things."

​As one example, Kavanagh noted the lack of "sanctimonious outrage from CBS" about Saudi Arabia's war in Yemen and the "killings of thousands of Yemenis for years now with American help. The Palestinians are getting killed… by methodical murdering by the Israelis," and yet Stahl focused on the disappearance and presumed murder of a single Saudi journalist, Jamal Khashoggi, in Istanbul earlier this month.

The editor also pointed to how Stahl failed to press Trump about his much-touted economic recovery, noting that "she gave him all kinds of credit for the economy, saying, ‘You are proud of the economy — and rightly so' because unemployment is down, the stock market is up." But as Kavanagh pointed out, "People are angry about the economy. Even though unemployment is down, everybody knows these aren't real jobs any more; they're gigs. There's not economic security with these jobs, and they're lower-paying jobs, and they're temporary jobs."

Trump also made comments about climate change that Kavanagh thought Stahl should have challenged, given his administration's commitment to deregulation of environmental laws protecting air and water resources from pollution and the US' intent to withdraw from the 2015 Paris climate agreement.

Instead of pressing Trump on these claims, Stahl instead moved immediately to North Korea.

Dave Lindorff, investigative reporter and founder of This Can't Be Happening, called this notion "totally absurd," noting the EU was "a post-war project" formed in the 1950s, first in the European Common Market (now called the European Economic Community, or EEC), which only took its present form as the EU in the 1990s. He noted, "It was encouraged by the US because it was seen as building a stronger resistance to the old Soviet Union… it also came out of historic sense that Europe had had all these wars that its member states fought with each other, and that by bringing them into some kind of economic union, that kind of horrendous scenario would be more likely to be avoided in the future."

Eventually, Stahl brought up the question of Russia, specifically asking Trump why he never has "a harsh word for [Russian President] Vladimir Putin." After Trump launched into a defense of his "very tough" meetings with Putin, Stahl began to press Trump on whether he believed or was willing to condemn various things Putin had done or was alleged to have done, including "assassinations, poisonings" and Russia "interfering in the 2016 election."

Trump replied, "They meddled, but I think China meddled, too. And I think other countries — " before Stahl cut him off to press him on why he hadn't said Russia meddled (even though he just had). However, Trump asserted that "China is a bigger problem," to Stahl's utter shock.

Kavanagh noted that neither Trump nor Stahl was willing to mention that Israel meddled in the US election, how the US constantly meddles in other countries' elections and how Trump is putting troops on several nations' Russian borders and strengthening NATO. "She hammered away at this stuff about Putin. She hammered away at this stuff about Kim Jong Un… it's the worst kind of dialogue between someone who half the time doesn't understand what he's saying and someone who's really trying to push him into the worst kind of militaristic, exceptionalist sanctimonious ‘We're the good guys and they're the bad guys' paradigm."