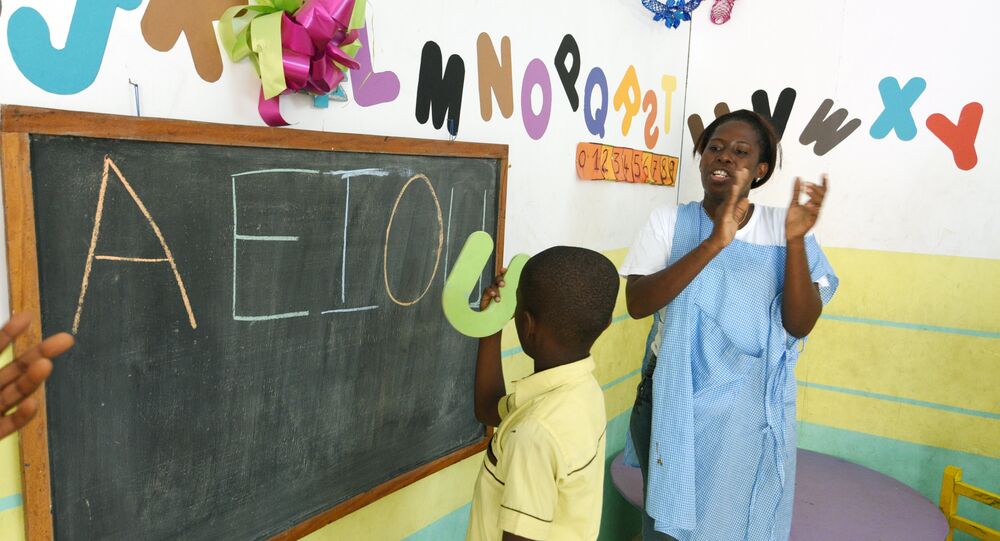 The number of children in the developed world being diagnosed with forms of autism has risen exponentially in the last 20 years. Sputnik spoke to James Cusack, the Director of Science at Autistica UK, about what lies behind the statistics.

Autistic children are on the increase in the western world with staggering increases in developed nations all over the world.

The National Autistic Society says there are about 700,000 people on the spectrum in the UK, while a survey in South Korea found the prevalence of autism was as high as one in 38.

"I don’t understand how anybody could do that to any child": Surveillance video shows teacher, and nurse dragging boy with autism through the hallway at school. https://t.co/bdiqNtnO24 pic.twitter.com/EW57yVdi9v

"We are seeing an increase in the numbers of children diagnosed with autism, which is a good thing," Dr. Cusack told Sputnik.

He explained that in the past autistic children and adults were often misdiagnosed with conditions such as schizophrenia or were just ignored and left to fend for themselves after their school years.

"There has been research in the US that found many people seen as schizophrenic and given anti-psychotic drugs were actually reassessed and found to be autistic, which is quite sad," Dr. Cusack told Sputnik.

He said many homeless people are believed to be suffering from undiagnosed autism.

A thought for a sunny Monday #Autism #AutismAwareness pic.twitter.com/HcK3zhg5it

​In April, French President Emmanuel Macron unveiled a 340 million euro (US$394 million) plan to rapidly reform the country's treatment of autism, which has been denounced by the United Nations as a "widespread violation" of human rights.

But why is the number of children diagnosed as autistic rising so steeply in Europe, North America and other developed countries?

Could it be to do with environmental factors and our 21st century lifestyles?

Professor Thomas Platts-Mills, in his paper The Allergy Epidemics 1870-2010, pointed out the huge rise in the number of children and adults diagnosed with eczema, asthma and food allergies in recent years, and said it was explained by environmental factors.

He pointed out eczema, asthma and food allergies had all gone up exponentially since the 1960s as children increasingly adopted an increasingly sedentary and indoor lifestyle.

But Dr. Cusack does not believe this is the case when it comes to autism.

"I haven't seen any convincing data saying the rise in diagnosis is due to the environment. It seems most logical that it is due to a rise in awareness," Dr. Cusack told Sputnik.

But he did say there had been research which suggested taking sodium valproate — a medication used to treat epilepsy — during pregnancy could increase the chances of having an autistic child.

Dr. Cusack said there was no reason to think the rates of prevalence of autism in the developing world were not very similar to those in Europe, North America, Japan, South Korea and Australia.

"Social norms are likely to have an effect on diagnosis but the diagnosis is really all about resources. Across the world there are different levels of awareness but there is no suggestion to suggest an increase in environmental factors," Dr. Cusack told Sputnik.

He said modern society needs to adapt to the prevalence of autism and he said that included changing behavior to make autistic people feel more uncomfortable, even if that including banning clapping and other loud or sudden noises in certain circumstances.

Scholar Explains Autism and How to Help People With It