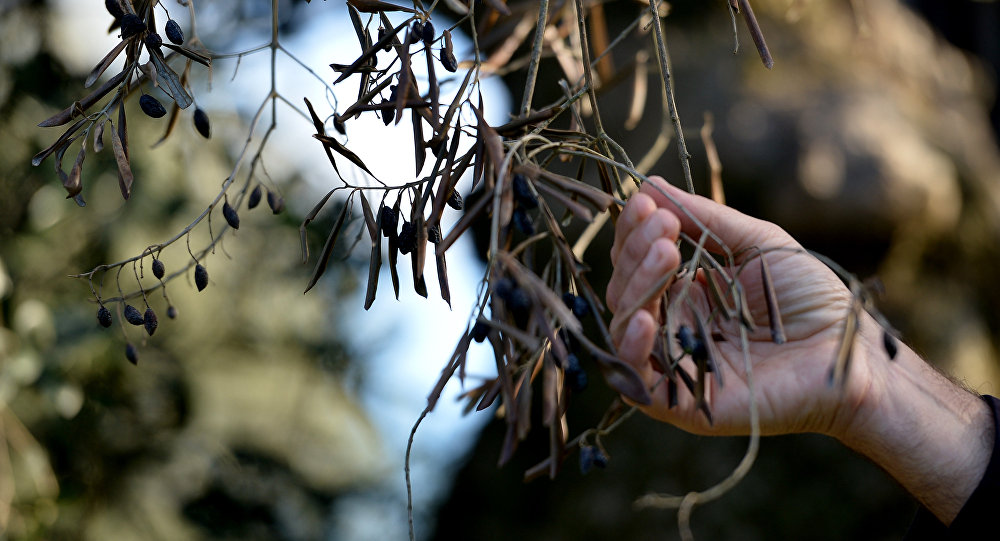 Thousands of olive trees have been cut down in Italy in an effort to prevent the spread of a deadly disease which began in the United States. Sputnik spoke to Thomas Simpson, who writes a blog dedicated to the Xylella Fastidiosa emergency.

Xylella fastidiosa is a bacterium which causes disease in a wide range of plants such as grapevine and citrus fruits, several broadleaf trees species and many herbaceous plants.

But the disease is causing the greatest concern at the moment among olive farmers in Puglia, a region of southern Italy that produces over a third of the nation's olive oil.

There are fears Xylella could have devastating financial and environmental consequences.

Thomas Simpson, whose Xylella Watch blog has been monitoring the emergency in Puglia since 2014, said there had been some shallow and sensationalistic media coverage but the disease did have potentially very serious consequences.

"If it spreads out of southern Puglia into the vast olive farms of northern Puglia, and from there to Calabria, Tuscany, Liguria, and then from there throughout the Mediterranean where 90 percent of olive oil is produced, it would be a major agricultural disaster," Mr. Simpson told Sputnik 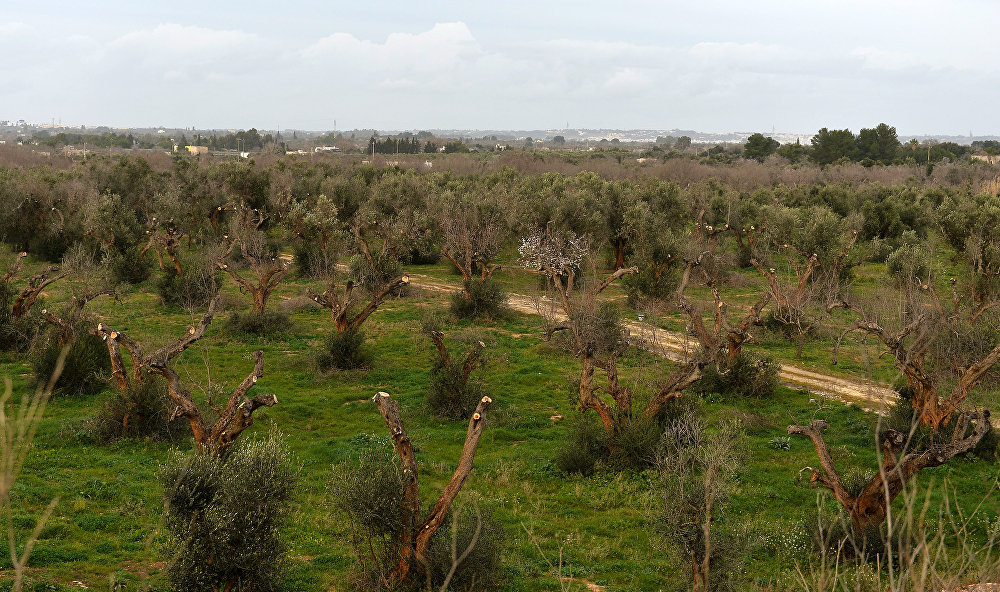 © AFP 2019 /
Xylella fastidiosa has decimated olive trees in Gallipoli, near Lecce, in the Puglia region of Italy

​Xylella first arrived in olive trees in Puglia, the heel of Italy's boot, in 2013.

It is thought to have arrived in a shipment of coffee plants that came through the port of Rotterdam and were sent to a plant nursery in southern Puglia.

"Xylella is on the EU list of quarantine organisms, meaning that wherever it is found, quarantine measures must be put into effect to stop its spread, including the destruction of infected plants. The EU & Puglia region control plan also calls for the destruction of any Xylella-susceptible plant within 100 meters of any infected one. The idea is to create a band of territory across the Puglian peninsula, stretching from the Ionian to the Adriatic Sea, that would be too wide for the insect vector to cross over," Mr. Simpson told Sputnik. Some scientists, journalists, and environmental activists question the scientific consensus about the disease and have made heavy use of social media to campaign against the eradication plan, saying that it would destroy the economy and landscape of Puglia, where the region's seal features an olive tree, a powerful symbol of the people's attachment to the land.

"They have contested the scientific consensus about the disease and offered versions of the facts alternative to the ones widely accepted by scientists, including charges that Monsanto and the very scientists who are studying the disease have intentionally planted it in order to get rich by selling Xylella-resistant cultivars. Almost all of these alternative theories have been shown over time to be false," Mr. Simpson told Sputnik.

Disease Has Also Cropped Up in France and Spain

Since 2013 different sub-species of Xylella have been found in Corsica, mainland France, the Balearic islands and the Spanish mainland, and isolated cases have been reported in Germany and Belgium.

Xylella fastidiosa was first identified in the 19th century in the southeastern United States, and spread from there to the wine-growing regions of California and to Central and South America.

​"It became a major problem in the California wine industry in the 1990s, when a new invasive pest, the glassy-winged sharpshooter, began to move into the Napa Valley from the south," Mr. Simpson told Sputnik.

"One scientist told me Xylella costs the California wine industry more than US$100 million per year in control efforts," Mr. Simpson told Sputnik.

Novel genetic information on #Xylellafastidiosa from #Spain.
The draft #genome of the first isolate recovered in the Island of #Mallorca in 2016 from a cherry tree, has been reconstructed by a collaborative team of Spanish and Italian researchers https://t.co/SnQk5b8SCK #xylella pic.twitter.com/gvoT6arGmV

It is a constant major threat to citrus cultivation in South America and has attacked coffee plants in Costa Rica.

"The disease continues to advance northward at a rate of 30-35 kilometers per year, but the rate of advance may be slowing somewhat, perhaps thanks to successful control efforts, or perhaps because the carefully cultivated olive trees of central and northern Puglia are younger and healthier than those in southern Puglia," Mr. Simpson told Sputnik.

Arrows or Olives: Trump and His Strange Use of Great Seal Flag

‘Polio-like’ Disease Infects Dozens Across US, Doctors Stumped on How it Spreads