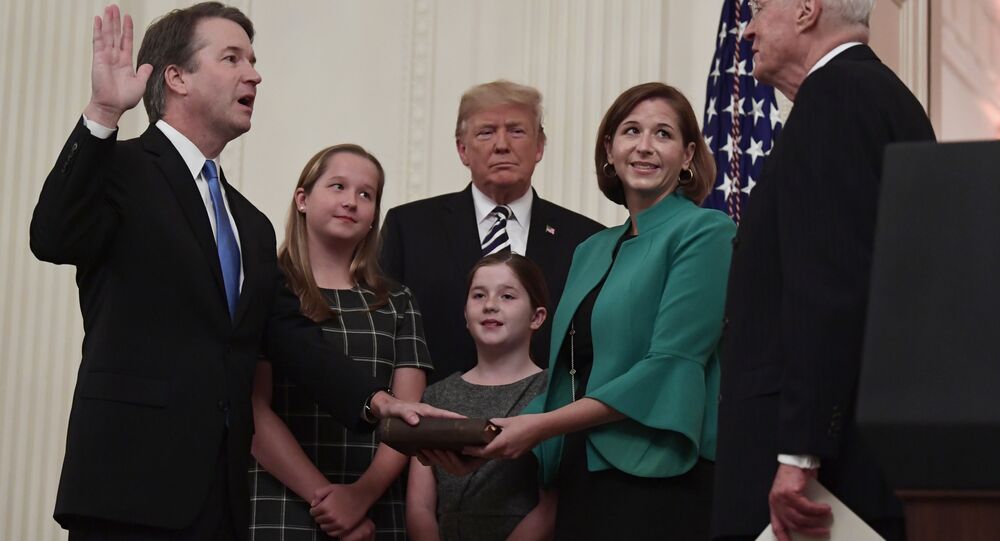 Brett Kavanaugh is unlikely to heed calls by critics to step aside from certain politically charged US Supreme Court cases in which his fairness might be questioned after a divisive confirmation fight, US media reported Thursday.

Moreover, S President Donald Trump said on Monday that the calls for impeaching Brett Kavanaugh, who was sworn in as a Supreme Court justice on Saturday, from the US federal judiciary constituted an "insult" to the country's people.

Since Kavanaugh's nomination in July, several women have accused Kavanaugh of sexual misconduct. In particular, allegations against Kavanaugh have been brought by college professor, Dr. Christine Blasey Ford, and two other women. The Supreme Court justice denied all the allegations.

© REUTERS / Chris Wattie
Pelosi: FBI Probe Into Kavanaugh's Alleged Sexual Misconduct Had 'Limited Scope'
In turn, Trump reiterated his claims that the scandal around his pick’s nomination to the top court was "phony" and "orchestrated" by the Democrats and paid for by George Soros, a Hungarian-American magnate.

Sputnik spoke to Marjorie Cohn, emerita professor of law at the Thomas Jefferson School of Law, San Diego, California, and a former president of the National Lawyers Guild for more insight on the issue.

Sputnik: What is your take on the pace of Kavanaugh’s confirmation process especially with the midterms looming?

Marjorie Cohn: Donald Trump and the Republican leadership did not want to take the chance of losing the majority in the Senate in the midterm elections.

They rammed Kavanaugh’s nomination through as fast as they could and refused to turn over millions of pages of documents bearing on his tenure in the Bush administration, including torture, surveillance, gay rights, same-sex marriage, etc. The Republicans used the perfunctory one-week FBI “investigation” as political cover for Republican senators who voted to confirm Kavanaugh. Their strategy worked. Kavanaugh was confirmed.

© AP Photo / Susan Walsh
Nearly Half of US Voters Think Media Coverage of Kavanaugh Hearings Was Biased - Poll
Sputnik: Once confirmed, how could his presence in the Court impact major court cases?

He will deliver a dependable vote for employers, private property, unfettered gun ownership, and church-state bonding. Kavanaugh will do his best to immunize Donald Trump from criminal liability and enable him to continue the mean-spirited, right-wing agenda of the Republicans.

Sputnik: Trump wrote in his Twitter that anti-Kavanaugh push was sponsored by Soros and ‘others’. What is your take on this?

In his hysterical testimony, Kavanaugh also claimed he was being attacked by a left-wing conspiracy that included the Clintons. These absurd conspiracy allegations were designed to distract attention from the merits of the nomination, which was an abomination from the beginning.

© AP Photo / Brent N. Clarke/Invision
Comedian John Oliver Ridicules Idea of Soros Involvement in Kavanaugh Protests
Sputnik: What is your general opinion on the ‘guilty until proven innocent’ approach in this Kavanaugh controversy?

Marjorie Cohn:The presumption of innocence only applies in criminal cases, not judicial confirmation proceedings. The pro-Kavanaugh forces used it as an excuse to support his confirmation.

But they ignored Dr. Christine Blasey Ford’s credible testimony, conflating it with Kavanaugh’s non-credible denials. The hearing and FBI “investigation” were designed to omit any witnesses who would have corroborated Dr. Ford’s allegations.

Views and opinions expressed in this article are those of Marjorie Cohn and do not necessarily reflect those of Sputnik.