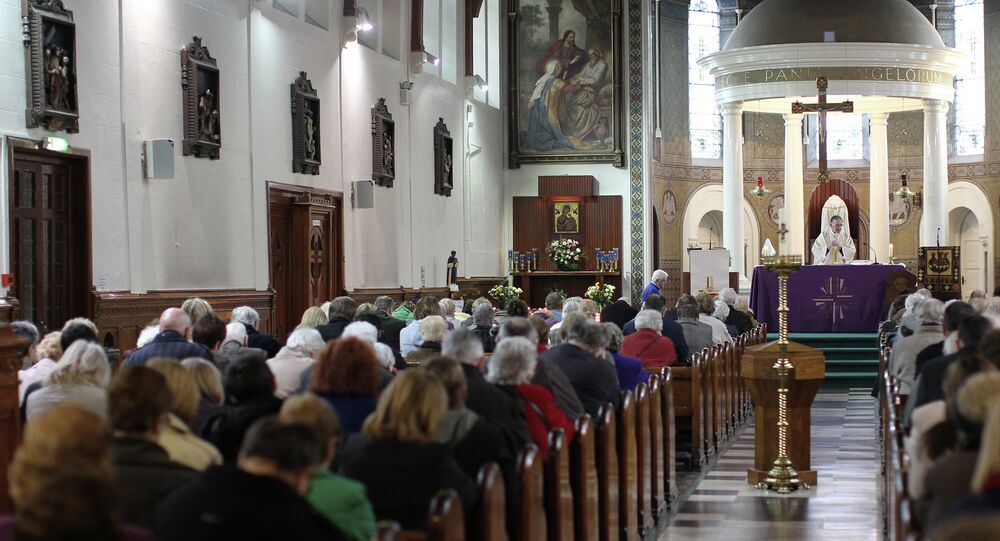 Pope Francis has made controversial statements attacking both abortion and euthanasia claiming that they are part of the modern world’s so called throwaway culture. The statement comes as surprise, as he is viewed by some Catholics to be the most liberal pope of the modern era.

Sputnik spoke with Tina Beattie, writer, broadcaster and Professor of Catholic Studies at the University of Roehampton in London to get her views on the Pope’s argument and secularism in the UK.

Sputnik: Do you think that the Pope is justified in his views on abortion and how do young Catholics view the issues?

Tina Beattie: The word liberal has to be used with caution as these labels no longer fit anywhere anymore and I don’t think they’ve evert fit Catholic ideas and personalities and attitudes. Most Catholics I know are liberal on some issues and conservative on others and that would include abortion.

© Photo : Pixabay
New Report Shows Sexual Abuse in Catholic Church Remains Unsolved - German Cardinal
The vast majority of Catholic women I know would appeal for decriminalisation and respect for the dilemmas women face in abortion decisions, but that does not mean they are pro-choice in the way that some secular feminist liberals understand it. I don’t think it’s possible to be a Catholic and to treat abortion as a kind of optional procedure that’s entirely a woman’s choice, because it is a moral decision. Having said that, there has to be a level of autonomy in moral decision making, even if we think somebody is doing wrong, we shouldn’t use the law to control them unless there are serious public implications for their actions.

My own argument would be that abortion in early pregnancy is a moral decision, I may think that it’s often an immoral choice, but sometimes it’s a dilemma that no human being should pretend is easy and I think if you use the rhetoric of hiring a hitman, murder or Nazi eugenics, is just so irresponsible, particularly in an all-male hierarchy who have yet to really listen to and learn from the situations in which women find themselves.

I think many abortions are too casual and fall far below a Christian understanding of life. Particularly when they are for the sake of disability, but it’s so easy to talk when one is not in that situation and I just think that the Catholic hierarchy needs to listen more and speak less to get a purchase on the difficulty of these issues. I think the language of hitman is so vulgar really. It’s impossible to generalise.

© AP Photo / Alessandra Tarantino
Pope Francis Alone Cannot Restore Trust in Catholic Church - Professor
There are young Catholic women who are shocked by what they see as an excess of liberalism by the pro-choice movement and who would call themselves pro-life, but this term has been utterly debased and degraded by American culture wars and the fact that so many Catholics and Evangelical Christians, support the most anti-life regime in modern American politics, because Donald Trump happens to say that he doesn’t agree with abortion seems to me to show that if the Catholic church is to be a responsible participant in the abortion debate, it has to take a much more informed, nuanced positon about what we’re dealing with when we are dealing with abortion.

Sputnik: Do you feel that the Modern World is inhospitable to religion?

Tina Beattie: The UK is probably one of the most secularised societies in the world. As a theologian I engage a lot with continental philosophy and thought, where there’s much greater openness to religious ideas and a much greater sense of dialogue with this intellectual traditions, but I really do feel that much of British society has a wilfully ignorant attitude towards religious positons and the wisdom that religious traditions have to offer.

It’s almost like secularism must tolerate religion and religion must learn from secularism, but actually religion has things to offer as well, so yes I do think the UK is hostile to religion, but having said that I also think that secular values and laws can work very greatly in favour of people in religious communities who risk oppression from their own communities, so as a Catholic women I am glad of the opportunities women have under British secular law, that would not be afforded if the Catholic church ruled the world right now, so it’s a difficult dilemma but there’s loss and gain on both sides.

Views and opinions expressed in this article are those of Tina Beattie and do not necessarily reflect those of Sputnik.