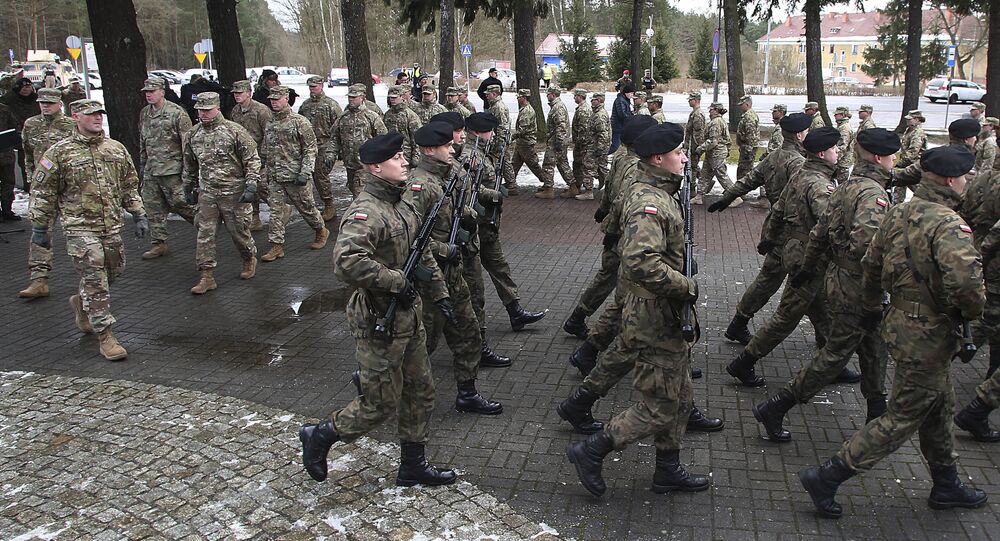 Warsaw's plans to establish a permanent US military base in Poland have nothing to do with NATO's plans, Polish political scientist Tomasz Jankowski. According to him, the Polish leadership is deliberately provoking Moscow into responding to the US military buildup on its western border.

During a September visit to Washington Polish President Andrzej Duda offered the US over $2 billion to station American military personnel on a permanent basis in Poland. Following the summit the US Department of Defense signaled that a permanent base in Poland was being studied, adding that no decision had yet been made.

However, on the eve of the Defense Ministers Meeting in Brussels on October 3-4, NATO Secretary General Jens Stoltenberg said he did not consider it necessary to beef up the US military presence in Poland, abstaining from commenting on Warsaw's plans.

Poland is host to about 3,000 US troops deployed on a rotating basis, a tank brigade, a US Air Force detachment consisting of five F-22 Raptors, and a missile defense complex which is currently under construction.

"Stoltenberg's statement unambiguously indicates that the plans for deploying US tank forces in Poland are not related to NATO's overall plans, the Transatlantic alliance, which coordinates its plans at its own meetings and meetings of its member states," Jankowski told Sputnik Poland. "This is just an initiative put forward by the government, the president of Poland, who, to be precise, did not so much suggest the actual maintenance of US Army troops, as the payment of a kind of tribute for the stay of the US contingent."

© AFP 2020 / Wojtek RADWANSKI
Official: Poland Wants to Locate US 'Fort Trump' Military Base on Eastern Border
The scholar drew parallels between the Fort Trump endeavor and Poland's involvement in the Iraq War. He recalled that Polish troops had taken part in the campaign at the request of their American allies, regardless of the fact that NATO was not officially engaged in Washington's Middle Eastern operation.

"It is really hard to say whether this is a split or only a disagreement, but it is very likely that this is not a strategy of NATO itself, but only the result of a bilateral agreement between Poland and the United States," Jankowski said returning to Duda's initiative and expressing skepticism about the latter's decision to spend billions of dollars from the Polish budget on the base.

Meanwhile, it appears that Poland's European allies are not enthusiastic about Warsaw's unilateral military plans.

The Polish political scientist highlighted that voices had started to emerge in the EU seeking to soothe Russia-European contradictions and find a way to solve the conflict in Eastern Ukraine and recognize Crimea's legitimate reunification with Russia.

"[However], in Poland or Romania, power is really in hands of warmongers who are trying to secure America's support for the implementation of their plans," Jankowski remarked.

"While they proceed with their aggressive rhetoric towards Moscow, one can see a tendency towards a detente between the EU and Russia in Germany or in other countries, at least in Italy," the political scientist pointed out. "It is necessary to remember about these EU states, because they obviously have an influence on the implementation of NATO plans. Well, if Poland really negotiates with the United States, then it can do it outside of NATO, and here lies the whole problem of the North Atlantic Alliance's ineffectiveness."

© AFP 2020 / Wojtek Radwanski
Warsaw Prepared to Pay for Construction of 'Fort Trump' in Poland – Duda
Jankowski believes that the much-discussed Fort Trump project would be aimed against Russia if implemented. Furthermore, he stressed that the US base would be created precisely to make the Russian Federation to somehow respond to this.

According to him, the Polish authorities are interested in the escalation of tensions with Moscow as this "makes it possible to constantly frighten society with an imaginary Russian threat and curtail civil liberties."

"Of course, the Russian Federation cannot but respond, since the state possessing the greatest military potential in the region cannot indifferently look at the deployment of more and more forces, besides that, of anti-tank forces near its borders," the political scientist elaborated. "After all, we are not talking about some sort of symbolic American division, but we are talking specifically about a tank division, that is, a strike unit. Undoubtedly, the Russian Federation will respond, and this response will play into the hands of the propaganda campaign that the incumbent government of Poland is engaged."