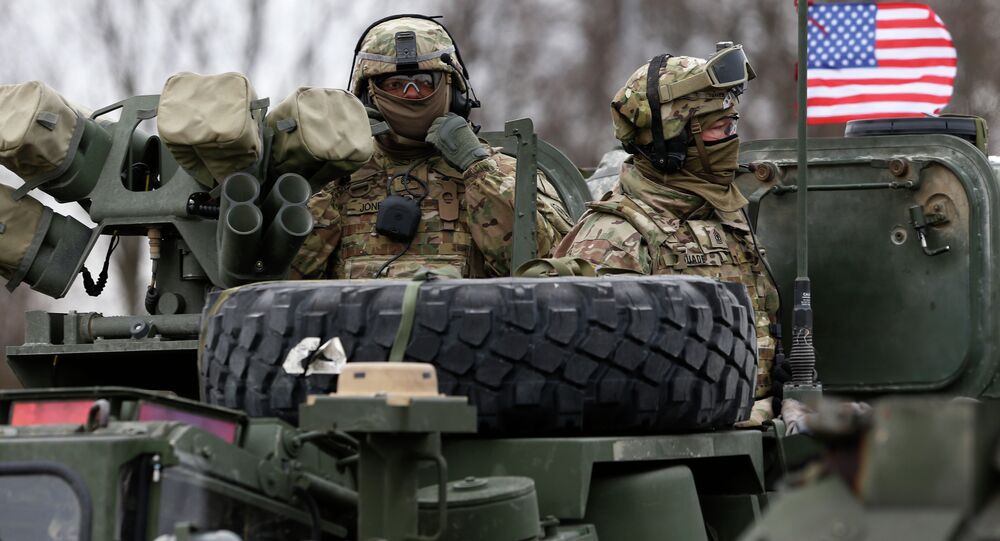 My Kingdom for a… Map! What's Behind DoD's Keen Interest in Europe's Geography

The US and NATO are seeking to improve Europe's logistics for potential operations by the bloc because the alliance's ability to move swiftly across the continent has been largely "atrophied" since the end of the Cold War, as a 2017 leaked NATO report said. However, the modernization of Europe's infrastructure could require billions of dollars.

The Pentagon is ready to pay millions for detailed maps of European roads: It turns out that the American Army could literally get stuck in a rut in the Old World.

The United States Army Corps of Engineers has issued a $50 million bid for a five-year contract to map routes through 31 European countries including Georgia and Ukraine. The Pentagon is interested in all available information including aerospace photograms, stereo packs, geodesic maps, underground communications, topographic data, as well as access to existing cartographic databases.

The question then arises as to what is behind the US Department of Defense's (DoD) keen interest in Europe's geography.

© AFP 2020 / MARCELLO PATERNOSTRO
'I Want Them to Be There': US Admiral Wants Russia to See NATO Exercise
In October 2017, Spiegel drew attention to a leaked NATO document entitled "Progress Report on the Alliance's Strengthened Deterrence and Defense Posture," that concluded "NATO's ability to logistically support rapid reinforcement in the much-expanded territory covering SACEUR's (Supreme Allied Commander Europe) area of operation has been atrophied since the end of the Cold War."

According to the leaked report, the alliance would be unable to move its personnel quickly enough to respond to a potential "threat" from Russia.

Just a month later, the European Commission released a joint communication to the European Parliament and the Council emphasizing the need to "improve military mobility" within the union.

The document outlined "steps to be taken to address the obstacles which are hampering the movement of military equipment and personnel across the EU with the aim of facilitating and expediting their mobility to react in a fast and effective way to internal and external crises." The report underscored that all the actions within the initiative's framework "will be coordinated not just between the EU and the member states, but also with other relevant stakeholders, especially NATO."

© AP Photo / str
"Good" Bombing: NATO Op Against Yugoslavia Was a War Crime – Lawyer
Commenting on the issue, Sputnik contributor Vladimir Ardaev presumed that the US and NATO were quite serious about the modernization of the European communications infrastructure. He referred to an article by The Washington Post highlighting that "the most powerful military in the world" may simply "get stuck in a traffic jam" while rushing to counter any potential threat.

Speaking to Sputnik, retired Lieutenant General Nikolay Topilin, Chairman of Veteran Council of the Engineering Corps, opined that European communications had not been designed for the operational movement of troops, adding that their modernization would require a lot of time and money.

According to the retired lieutenant general, the weakest spot in the transport infrastructure of Europe is bridges and tunnels, which are not designed for heavy military equipment and do not correspond to the required dimensions.

In addition, the European railway network much weaker than the Russian one, he stressed. He added that many European airports, including international ones, do not have runways suitable for military aircraft. At the same time, the Old World's seaports are not intended for the entry of large-tonnage warships, Topilin said, stressing that a lot needs to be done to modernize and rebuild the infrastructure to meet US-NATO requirements.

© AP Photo / Virginia Mayo
NATO Needs to Develop Better Relations With Russia - Stoltenberg
In that sense, Eastern Europe poses far more challenges to the alliance when the West, due to its Soviet past. For instance, the width of railway gauges in the Baltic States differs from that in Europe as they were built in accordance with Russian standards. It takes time to change wheeled carts for wagons coming from the West, which means that rapid transfer of troops and equipment is nearly impossible under these conditions.

Topilin specified that "the main strategic problem of Europe is that all communication networks there have developed chaotically, depending on the needs of commercial logistics, but without taking into account defense needs."

"At the same time in Russia the construction of any transport object with operational and tactical significance is traditionally conducted in compliance with the norms prescribed by the military," the retired lieutenant general highlighted. "Bridges and tunnels have well-defined characteristics, the communication routes can be used as axial or rapid roads."

Topilin stressed that the aforementioned infrastructural changes resembles nothing so much as an arrangement of the new theater of operations, estimating that the endeavor would require billions of dollars. While it is not the first time that Washington has tried to drag Russia into an arms race, Moscow needs to continue closely watching NATO's activities in Europe, the retired lieutenant general underscored.