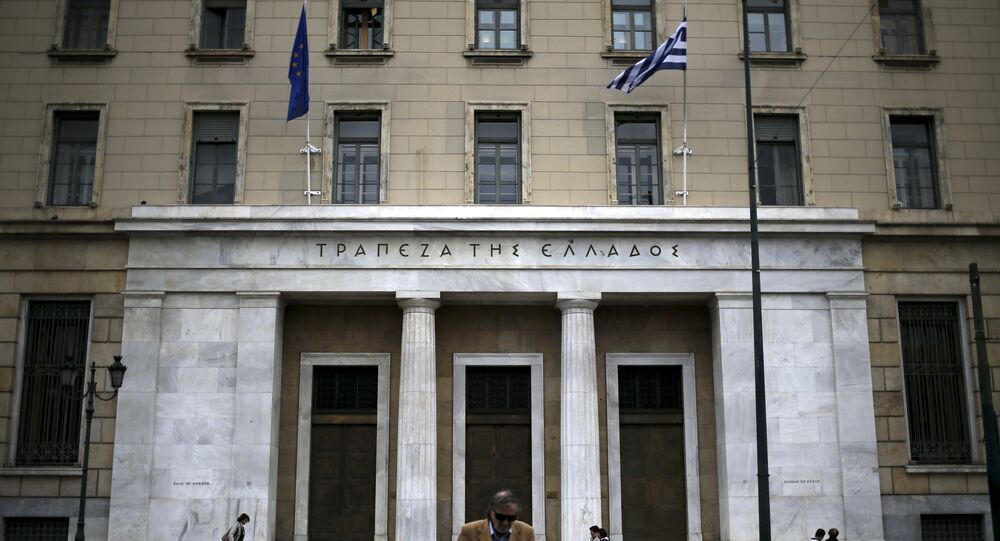 The country's banking sector has been shaky since early September, but things worsened dramatically in early October. The four institutions suffered losses of up to 40 percent. Piräus Bank's share price dropped by almost 30 percent, and the Athens stock exchange index fell to its lowest level in the past 31 months.

How could that be? Hadn't Greece been released from the euro bailout in August, to the great applause of politicians? And didn't those four large banks pass the ECB stress test in May?

In fact, just six weeks ago EU Council President Donald Tusk on his Twitter account congratulated the Greek people for returning to international financial markets; and European Finance Commissioner Pierre Moscovici said that "it draws a symbolic line under an existential crisis." Less than half a year ago the ECB certified the four systemically important Greek banks to be able to survive severe turbulence without major damage.

READ MORE: Italy's Flight From Eurozone Would Be Liberation, Not Punishment — Eurexit Chief

© REUTERS / Alkis Konstantinidis
Greek Finance Ministry Lifts Restrictions on Cash Withdrawals
However, anyone who thinks that such stress tests have any bearing on the actual state of financial institutions should be reminded that over the last eight years Greek banks have gone bankrupt three times — each time after having passed the ECB stress tests.

Such tests are nothing more than an RP tool by which the ECB deceives the public about the true state of the financial system. Even if carried out with the utmost care and seriousness, their results would be largely useless for the following reason — more than 40 percent of today's banking transactions are carried out by unregulated shadow banks, mainly hedge funds.

Large banks have long since outsourced the riskiest part of their business to this area. Particularly, the trading of high-risk derivatives almost defies any regulation, since these are so-called "over-the-counter transactions" that aren't seen in the balance sheets. No wonder then that the results of these stress tests are basically worthless.

© AP Photo / Petros Giannakouris
Greece Exits Final Three-Year Bailout Program - ESM Fund
Even a layman would be skeptical when looking at the balance sheets of major Greek banks. In the middle of this year these funds had non-performing loans (loans that haven't been serviced for at least 90 days or are at risk of default) of €88.6 billion on their accounts — that's equal to just almost half of all the loans granted, and it exceeds the EU's required maximum by nine times!

The crisis has passed? No way!

As far as Greece's release from the EU bailout is concerned, a glance at facts and figures is enough to deny the euphoria of EU bureaucrats. Greece has been able to overcome its problems three times since 2010, but that was only with outside help; the country's loans for eight years total €289 billion. The country's debt now accounts for around 180 percent of the GDP which is, by far, the highest in Europe.

© AFP 2021 / Daniel Roland
European Central Bank Urges Eurozone Reform to Boost GDP Growth
In order to maintain the illusion of repayment, Greek creditors have continued to stretch their debts. Thus the ESM's loan maturity is 32 years. In June, EFSF's loan maturity was extended to 42 years, so it should be paid by 2060. In addition, interest payments that were actually scheduled for 2022 were deferred for another 10 years until the end of 2032.

All this is nothing but a dubious juggling of numbers, hiding that Greece and its banks are already hopelessly bankrupt. Why? Because Greece's financial sector is part of the completely uncontrolled international financial casino; because bankruptcy would most likely lead to the collapse of the system as a result of the close links between Greek and foreign capital and the incalculable risks to the euro and derivatives.

How will it turn out? The Athens government is already working together with the ESM and the Greek banking association on an "intervention plan" meaning a classic bail-out with the help of EU taxpayers' money.

An EU-mandated bail-in (the involvement of shareholders and investors) doesn't appear to be under consideration because one fears the political and social consequences.

© Sputnik / Natalia Seliverstova
Greece’s Economic Recovery Projected to Strengthen in Near Term - IMF
Moreover, the distressed banks are currently trying to bundle the bad loans and sell them at low prices, while there are enough hedge funds already waiting for that. But that would further weaken the market and start another downward spiral.

Greece's problems won't be solved in any case. But two things are already certain: the next aid payments will have to come, and to pay for that we have the Greek working class, 35 percent of whom are already at or below the poverty line, and the middle class that is now suffocated by a tax burden of up to 75 percent. As for pensioners, in January they're going to face the 23rd cut to their pensions, this time by 18 percent.

No matter from where one looks at developments in Greece: this is nothing but a deliberate criminal delaying of bankruptcy in favor of the international financial industry and at the expense of the middle class and the most vulnerable sections of the population organized by the government in collaboration with the EU and ECB bureaucrats.