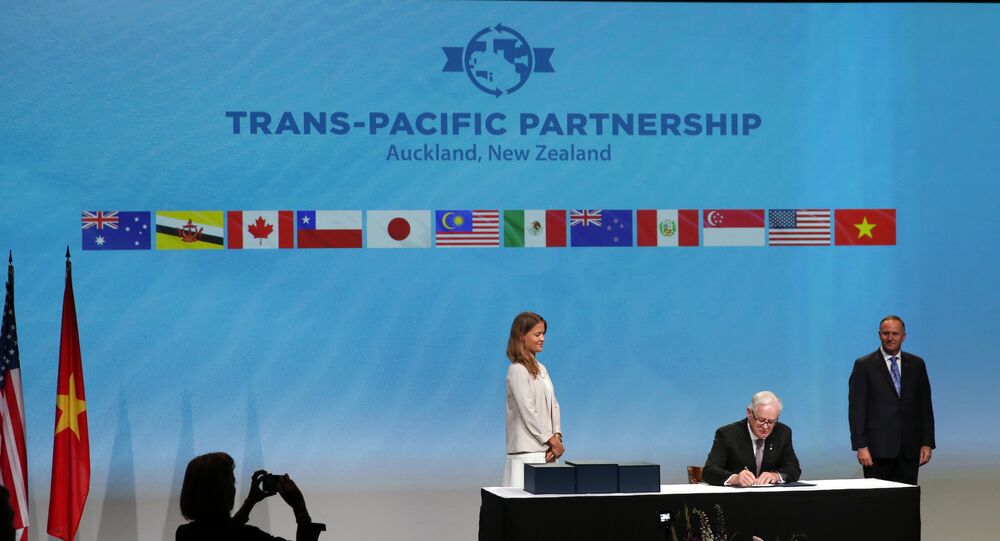 According to Japanese Prime Minister Shinzo Abe, the Trans-Pacific Partnership is willing to welcome the UK after it leaves the European Union. Mr. Abe stressed that even outside the EU, Britain is a global power to be reckoned with.

Sputnik has discussed the prospects of the UK's membership in the TPP with Stephen Nagy, Senior Associate Professor from the Department of Politics and International Studies at the International Christian University, Tokyo, Japan.

Sputnik: What are the prospects of the UK's membership in TPP?

© REUTERS / Clodagh Kilcoyne
'Terrified by Eurosceptic Return', EU Is Keen on Brexit - UK Politician
Stephen Nagy: I think that there're two things that we can look at. First, it's important to understand that TPP 11 is a new agreement which was signed during the leadership of Prime Minister Abe and the remaining partners. It was constructed in such a way that it removed the charges that included the United States; and it was designed in a way that it could accept not only partners within the region but also extra-regional partners such as Britain.

Importantly, it has also been designed in a way that the US may be able to come back in one capacity or another. In short, this new TPP, the CPTPP, is an open regional trade agreement that is likely to welcome Britain if Brexit does go through.

Sputnik: How attractive is being a part of the TPP to Britain post-Brexit?

© AP Photo / Jane Barlow
Nicola Sturgeon: There Should Be a Brexit Backstop Option for Scotland
Stephen Nagy: The TPP 11 represents a really interesting assortment of countries. We have Japan, Canada, Mexico, Peru, Australia and New Zealand; and it characterizes these countries as very rich consumer markets. By joining the TPP basically, Britain would be able to export its products to these wealthy countries. And that's a very important thing for Britain because once it disentangles from the EU, it's going to need to find new markets where it can sell its products, and ensure that there are no tariffs that penalize its products compared to European products or some other products.

I think that the TPP represents a very interesting opportunity for Britain in any kind of post-Brexit affair. But they'll need to balance their initiative to join the TPP 11 with some of its pre-existing trade agreements with other countries and the kind of trade agreement that they're going to get out through the kind of Brexit agreement they are negotiating with the EU.

Sputnik: To what extent do you think this will be able to offset the consequences of withdrawing from the European Union?

© REUTERS / Aaron Chown/Poo
UK PM May Orders Preparation of Crisis Plans Amid No-Deal Brexit - Reports
Stephen Nagy: At this state we don't know. I think that Prime Minister May is trying to negotiate the softest Brexit possible to prevent tariffs being put on British products, to allow uncontrolled migration, especially of that high-skilled migrants that bring a lot of benefits to the British economy. If we have a hard-exit Brexit, this is going to be completely different. Britain will lose access to the European market, or it will have access that has lots of tariffs; and this will be detrimental to Britain.

By joining the TPP 11 it really provides Britain an opportunity to make up for some of those losses, potentially gain new markets and reorient its economy away from the EU. This is a challenge; this has never been done before and we should be very much aware that the UK and the EU's economic entanglement has happened over 40 years, so it's going to be very difficult to disentangle over a one year period of time or less.

Sputnik: How much prospect is there really in turning toward the Pacific as opposed to the EU? Of course, the EU is a much closer and also quite a wealthy customer if we look at the consumers of the EU with a relatively high standard of living. Certainly, the Pacific is going to offer something quite different; what do you think that will be? Do you think it's possible that the Pacific could become more interesting?

Stephen Nagy: I think the nature of your question really pulls out the complexity of the challenge of pivoting, doing an economic pivot to the Pacific. We should be pretty clear that the momentum of the world's economy is moving towards the Indo-Pacific, it is not Atlantic-centered, it's moving toward the Indo-Pacific.

The US and North American partners have very strong and increasingly deep relations with all the countries in East Asia but also the new economies that are emerging, the Indian and the Southeast Asian economies.This is going to continue to increase as those populations increase, as they grow their middle classes, and those middle classes are not in the tens of millions, they are in the hundreds of millions. And I think that this presents a very big opportunity not only for a post-Brexit Britain but all European countries.

Sputnik: Shinzō Abe had called for avoiding a no-Brexit deal; why is Japan so interested in what kind of deal the UK leaves with?

Stephen Nagy: The UK as it stands now is a banking center. It's what we call a global hub for human talent, for migration, for the financial sector. If it does leave the EU through Brexit, hard or soft, it's going to lose some of those advantages. One of the advantages is migration, if they're allowing the free migration of high-skilled labors. Through a Brexit, this means that London won't be as an attractive place for the HQs of Japanese businesses and other businesses.

They're going to look for other places to set up shop. Right now I think the most attractive areas are maybe Frankfurt or maybe in the Netherlands because they'll have open access to the EU but they also have the attractiveness of low taxes and other attractive features that allow the Japanese businesses to be competitive.

The views expressed in this article are solely those of Stephen Nagy and do not necessarily reflect the official position of Sputnik.