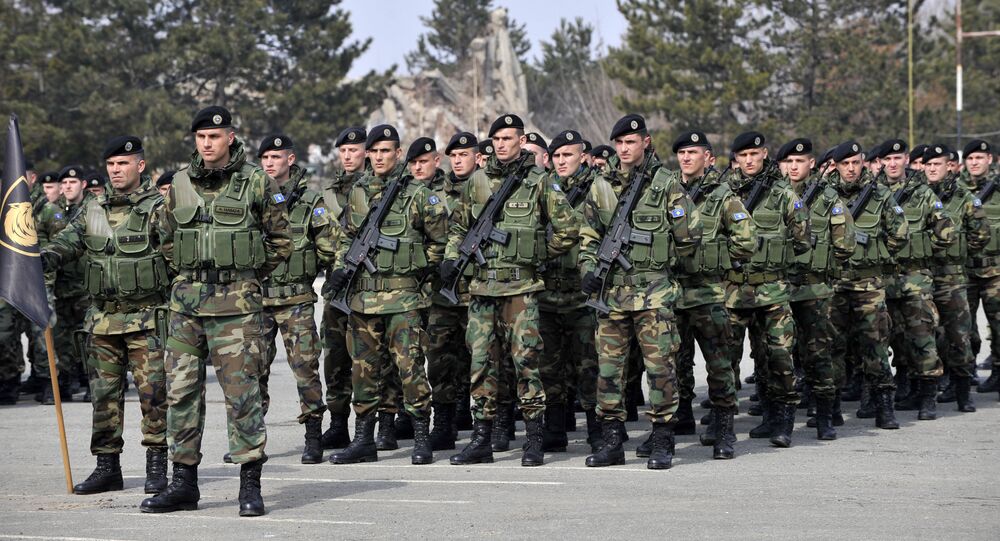 Commenting on Pristina's drive to transform the Kosovo Security Force into a professional army, political analyst Predrag Rajic told Sputnik Serbia that the project has yet to get the full-fledged backing from the White House.

During his talks with US Defense Secretary James Mattis on the sidelines of the UN General Assembly in New York on September 28, Kosovo Prime Minister Ramush Haradinaj claimed that Washington had ostensibly "blessed" the transformation of the Kosovo Security Forces (KSF) into full-fledged armed forces. Haradinaj added that Mattis expressed the White House's willingness to support Pristina in its relevant talks with Belgrade.

Addressing the issue, political commentator Predrag Rajic told Sputnik Serbia that the Kosovo Prime Minister made the statement on Washington's "blessing" of the Kosovo army in order to strengthen his own political position.

"By making such claims, Haradinaj is trying to convince everyone of his acting as Washington's closest political figure in Kosovo, but I'm not sure that he is such a figure. Both he and [Kosovo President Hashim] Thaci were military commanders in the past, and they are called the so-called 'forest politicians' politicians in Kosovo," Rajic pointed out.

He suggested in this context that Haradinaj and Thaci are concerned about the increasing clout of Albin Kurti's Vetevendosje (Resistance) party, something that Haradinaj said was confirmed by recent mass rallies.

Rajic also pointed to the fact that Haradinaj's statement on Washington's "blessing" of the Kosovo army was never confirmed by the US side.This indicates that the US is not ready for such an "adventure", requiring it to break the rules which it itself supported in the past, according to the Serbian analyst.

"Over the past year, controversial statements pertaining to the creation of the Kosovo army have been received from Washington.  Obviously, the Americans themselves are not sure whether they want to support this project," Rajic noted.

In this vein, he said that he does not rule out a possible Philippine scenario when it comes to the potential establishment of the Kosovo armed forces in "the next 10-15 years."

"What if after the Kosovo army is formed, something will happen that cannot be imagined today? For example, Kosovo — the greatest ally of the United States – may receive an openly anti-American president, like in the Philippines, where Rodrigo Duterte is making every effort to break all ties with the US, especially in the field of security, and to get closer to China," Rajic pointed out.

He also did not exclude the possibility that if Kosovo obtains "the attributes of a full-fledged state, to which the army belongs, it will have the opportunity to completely reconsider its foreign policy and start looking at some other side, not just at Washington's".

© Flickr / Antti T. Nissinen
US Warns Citizens About Increased Risk of Terror Attacks in Kosovo - State Dept.
Rajic's remarks came after Milovan Drecun, Chairman of the Parliamentary Committee for Kosovo and Metohija, stressed that he does not perceive Haradinai's statement as a sign that the US supports the formation of the Kosovo army without the Serbs' consent.

He recalled Washington's position which stipulates that "the US backs the plan to create Kosovo's armed force only within the framework of the procedure prescribed by the law."

The views and opinions expressed by Predrag Rajic are those of the analyst and do not necessarily reflect those of Sputnik.