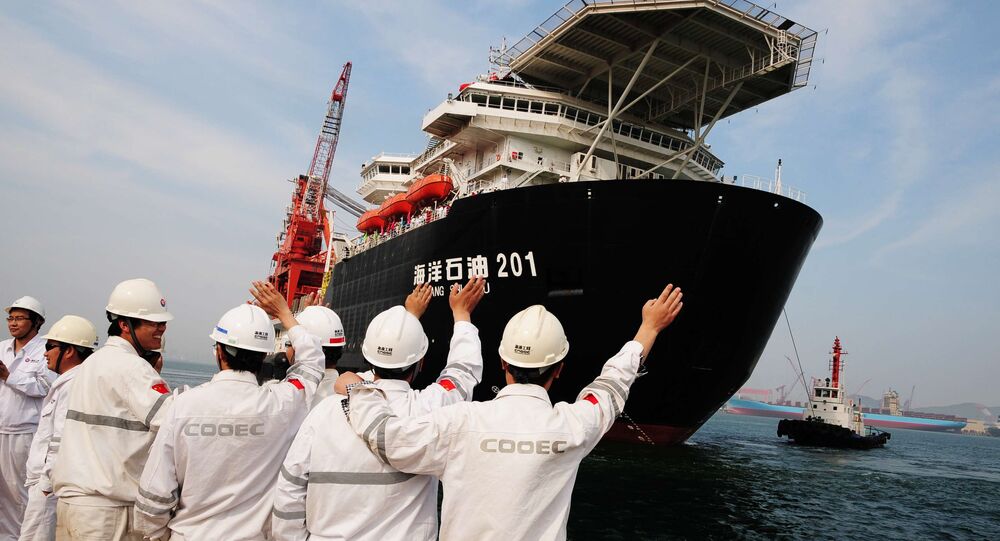 MOSCOW (Sputnik), Tommy Yang - China is likely to resume crude oil imports from the United States in the near future, after Chinese authorities reached consensus with industry leaders that halting such imports was an unnecessary sacrifice amid escalating China-US trade tensions, experts told Sputnik.

As China and the United States slapped steep reciprocal tariffs on each other in recent months, Chinese crude oil importers temporary suspended purchases from the United States, as it remained unclear whether US crude oil would be included in the list of US goods targeted by retaliatory Chinese tariffs.

According to a top executive of China Merchants Energy Shipping Corporation, one of the major carriers of US crude oil to China, shipments of crude oil from the United States to China have "totally stopped." Shipment tracking data has also indicated that US crude oil exports to China stopped in September.

However, oil industry analysts suggested that Chinese oil importers could be ready to start buying US crude oil again in the near future, after domestic oil companies persuaded Chinese policy makers to exclude US crude oil from the list of US goods targeted with harsh tariffs.

"At the time [of imports suspension], the position of Chinese policy makers was not very clear. It looks like the state oil companies did some lobbying [in favor of continued imports of US crude oil]. When Chinese authorities announced the decision to remove US crude oil from the list of US goods subject to steep tariffs, they said the decision was made after listening to feedback from the industry. The shipment suspension mostly took place in July, August and September. We expect US crude oil purchase to start again in October," Li Li, research director on oil and gas markets with ICIS, a leading intelligence provider for the global petrochemicals and energy markets, told Sputnik.

The expert argued that giving up on importing crude oil from the United States would be an unnecessary sacrifice for China and could risk hurting the nation’s economic growth.

"We believe the state oil companies in China would have already communicated with Chinese authorities, before buying US crude oil again. It is unnecessary for China to sacrifice crude oil imports from the United States. That is because crude oil is a key energy source that would have a huge impact on domestic living standards, Consumer Price Index (CPI) and overall macroeconomics in China. If domestic oil prices go up or oil shortage happens in China, it would have serious negative consequences. But halting the imports would not hurt the United States much, because it can easily export to other countries," she said.

Li noted that new shipments of US crude oil were only expected to arrive in China by late November or early December, if the Chinese importers started to make new orders from October.

Driven by rapid domestic economic growth, China’s appetite for crude oil continued to skyrocket in recent years. China overtook the United States as the world’s largest crude oil importer last year, by importing an average of 8.4 million barrels per day (BPD) compared to US imports of 9.4 million BPD, according to the statistics from the US Energy Information Agency (EIA).

© Sputnik
Washington to Accuse China of Leveraging World Trade to Weaken US Security - Reports
Looking for new sources to diversify its energy supply, China started to import crude oil from the United States in 2016, after former US President Barack Obama signed a bill lifting the ban on US oil exports in 2015. US crude oil exports to China became a key driver for growth of Chinese crude oil imports last year. Chinese imports of US crude oil reached 224,000 BPD in 2017, up 1,018 percent from 22,000 BPD in 2016, according to the EIA figures.

Before bilateral trade tensions led to disruptions in recent months, US crude oil exports to China reached a record high of 510,000 BPD in June, the EIA figures showed.

The growing importance of US crude oil imports means China will have to pay a steep price if it decides to halt such imports completely, Li suggested.

"It is possible for China to look for alternative sources of supply to replace US crude oil imports. But the problem is that we would lose our negotiating power. We would have to pay a steep price for it. US crude oil exports to China have been rapidly growing in recent years… It [US crude oil] has also become something we cannot afford to lose," she said.

Li added that China was also facing additional pressure from sharp rising crude oil prices in the global markets in recent months, when the benchmark Brent crude skyrocketed as high as $86.3 per barrel.

Other industry analysts suggested that China could secure crude oil supplies from other places such as West Africa, the Middle East or Russia.

"I heard they [China] started to take a lot of West African crude. They also have to take more from the Middle East and Russia. We are already hearing that the Middle East and Russia are ramping up their production. Saudi Arabia said it would increase its output by 300,000 BPD this month," Weng Inn Chin, a senior oil market analyst at industry consultant Facts Global Energy in Singapore, told Sputnik.

But the Singapore-based analyst acknowledged the pressure China may face in terms of higher prices.

"My view is that the oil pipeline [from Russia to China] is fully utilized right now. If they want to buy more from Russia, they would have to lift from the Kozmino port. I’m hearing that the premium from the Kozmino port is as high as $6-7 per barrel. But they do not have a lot of options, besides Russia and Saudi Arabia," he said.

According to official figures from Chinese Customs, China spent $162.3 billion on crude oil imports in 2017, up 39.1 percent from the previous year, with Russia and Saudi Arabia being the top two suppliers.

China’s heavy reliance on crude oil imports also showed no sign of easing in recent years. According to a report from the Economics and Technology Research Institute under China National Petroleum Corporation (CNPC), China’s crude oil imports accounted for about 67.4 percent of the annual domestic consumption in 2017.

The views and opinions expressed in this article are those of the researchers and do not necessarily reflect those of Sputnik.