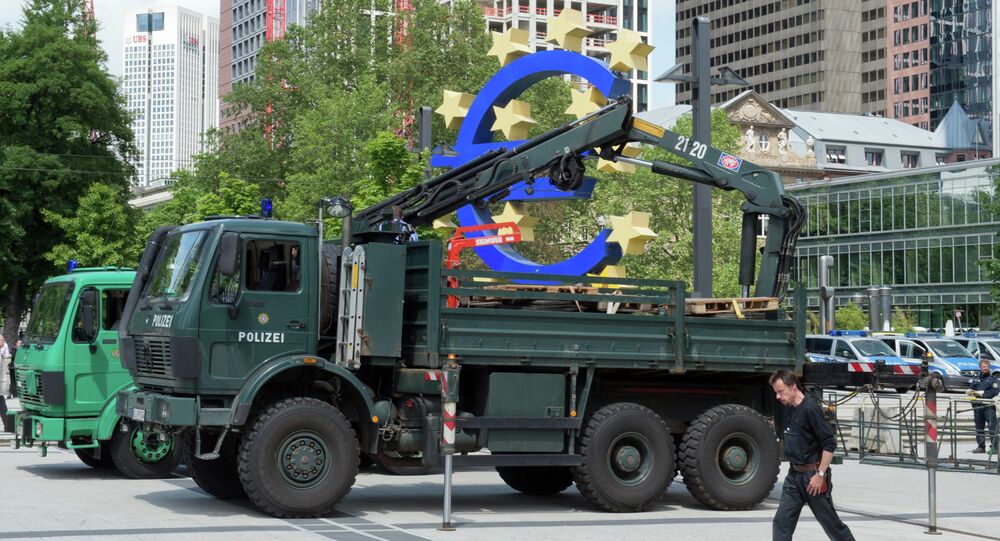 Europe remains highly vulnerable to a global economic downturn, according to a report by credit rating agency Moody’s. It said that Europe is not ready to cope with another major slump stressing the financial system.

The report was published as Italian stocks and bonds nosedived after the government published tax and spending plans, which could see the country’s debt increase.

Sputnik discussed Moody's warnings about the Eurozone's vulnerability with Nicola Borri, an economics and finance professor at Rome's LUISS University.

Sputnik: What is your take on this report by Moody's? Is it an accurate assessment or is it perhaps a bit too pessimistic?

Nicola Borri: I actually share the concerns of Moody's, because the situation in Europe has definitely improved significantly with respect to the years of the sovereign debt crisis, 2012-2013. However, there are still significant threats and currently, Italy, the country where I live, is definitely the major threat to the stability of the Eurozone and Europe.

Italy has decided to go on with a budget plan that is unsustainable, most likely, and it would lead to a significant increase, over the long-term, of the Italian debt, which is already large. The risk that the markets and Moody's are concerned with are that Italy might eventually decide not to repay its debt and would default, and that probably would mean the end of the Eurozone as we know it.

Sputnik: Could you perhaps elaborate regarding the Italian government's new spending plan? Is it considered efficient?

Nicola Borri: Italy had committed in previous years to budgets that were in the order of1 — 1.5% of GDP in deficit. That would entail a moderate increase in debt — an expenditure that was supposed to be under control.

© REUTERS / Murad Sezer
Eurozone Financial Sector Braces for Spillovers From Turkey’s Economic Woes
Instead, the current government, in a bit of a surprise [move], decided for a much more generous budget that currently would mean a deficit of about 2.4 % of GDP — and most likely even higher; because of the promises this government has made to people in terms of generous pensions, lower taxes, higher investment, would probably mean even higher spending. And the markets, investors and analysts fear that this is sustainable. Inside the government coalition there are forces that would not be unhappy if Italy would go back to the lira, its old currency, and so this is what really frightens the markets.

Sputnik:  In your opinion, to what degree were the Italian government tax and spending plans actually reflected in the report by Moody's?

Nicola Borri: I think that they are to a big degree. As I have mentioned before, the situation in many other countries in the Eurozone has much improved. Greece was recently out of the bailout plan. Economic conditions in other countries that were not strong, like Spain or Portugal, are much better than they used to be just a couple of years ago.

So the big problem is definitely Italy and Moody's is, of course, aware of that. Italy is the third largest country in the Eurozone and its debt, at about 130% of GDP, is very large. It [the debt] is owned by a lot of banks in Italy and also other countries in Europe, like France. This means that any turmoil in the Italian economy will immediately be reflected in the European financial system.

Sputnik: In this report, it is stressed how vulnerable Europe is to a new financial crisis, and yet, of course, Europe did enjoy economic growth last year and there was a drop in unemployment rate. Is there a discrepancy there? What is your opinion?

© REUTERS / Tony Gentile
Italian Gov't Not Planning to Hold Referendum on Leaving Eurozone - Deputy PM
However, say that the situation in the US deteriorates, which many analysts say could [happen] in the next couple of years; say that emerging countries' economies start slowing down, as we have seen in Brazil, in Argentina, possibly in China, then Europe will definitely be at risk. On top of this, we have these domestic issues, like the one I was mentioning about Italy and of course, there is the Brexit issue. So these are all risk factors and if you put them together, the situation probably is not as good as some people say.

Sputnik: Now that we have established that Europe is extremely vulnerable to a new financial crisis, could you perhaps elaborate a bit more about the main weaknesses, the main vulnerabilities of its economy?

Nicola Borri: I think the main vulnerability in Europe is still the financial system, the banks. Because the banks were severely hit by the financial crisis, many of them had to recapitalize. Many of them still benefit from very generous programs by the European Central Bank. So the risk here is that an economic slowdown together with disagreements among European countries might lead the European Central Bank to be less generous, for example in its programs of buying government bonds and these are exactly the assets that are in the balance sheets of this financial institution.