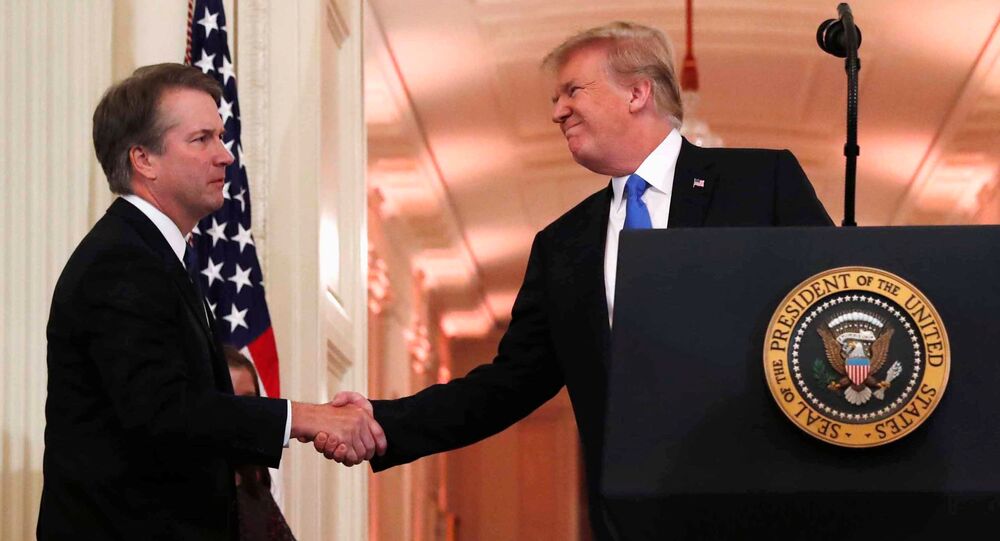 Brett Kavanaugh has come into the cross hairs of the FBI over sexual misconduct allegations. Speaking to Sputnik, Wall Street analyst Charles Ortel explained why US President Donald Trump still has a great deal of confidence in his pick.

Donald Trump's pick for the Supreme Court Brett Kavanaugh will be investigated by the FBI over sexual assault allegations. If US lawmakers throw sand in the nominee's gears in the absence of credible evidence of his guilt, it will backfire on them during the midterms, Wall Street analyst and investigative journalist Charles Ortel warns.

"Should the Senate fail to confirm Kavanaugh, absent arrival of fresh and valid evidence of wrongdoing, Democrats (and rogue Republicans) will pay a heavier price in looming midterms and afterwards. Ultimately, President Trump will certainly try again, and likely succeed, by a wider margin of victory," the investigative journalist told Sputnik.

He believes that Kavanaugh "will soon join the US Supreme Court, as he is richly qualified to do."

"Judge Brett Kavanaugh has an admirable record as a fair, strict constructionist, and the left is agitated because he likely will side with four other conservatives in cases whose determination will reign in more liberal colleagues, and set binding precedents, possibly for decades to come," Ortel underscored.

© REUTERS / Pool/Win McNamee
Kavanaugh Accuser's Friend Claims Ford 'Never Prepared' Her for Polygraph Test
The scandal erupted after Dr. Christine Blasey Ford accused Kavanaugh of an alleged attempted rape back in 1982. Additionally, Deborah Ramirez, a Yale classmate of Kavanaugh's, as well as Julie Swetnick, the third accuser, claimed that the Supreme Court nominee was involved in supposed sexual misconduct decades ago. For his part, Kavanaugh denies the allegations, calling them "a calculated and orchestrated political hit." According to the Wall Street analyst, that could be the case.

"Those threatened by the inevitable consequences for the Supreme Court of President Trump's surprise victory, had to find a way to embarrass him from persevering, and they have arrived at the method of tendering claims from the distant past that are tough to examine, and might prod a less disciplined person to abandon the confirmation process. But, it seems that Judge Kavanaugh and his fine family are made of sterner stuff," Ortel said.

Commenting on the latest FBI probe, the investigative journalist highlighted that Kavanaugh "had already passed six, comprehensive FBI background checks, including one when he obtained the highest possible security clearance (while working in a capacity for President George W. Bush, where Kavanaugh saw virtually all communications destined for the President)."

© AP Photo / Tom Williams
Trump on Kavanaugh Investigation: ‘Very Scary Time for Young Men in America’
Ortel presumed that Trump had agreed to kick off the inquiry as he has a great deal of trust in his pick. The analyst added that US Senate investigators had already looked into the nominee's past records.

"US Senate investigators have more power than the FBI does in performing background checks — the Senate and its investigators can compel testimony by subpoenas — and they have already done a great deal of checking."

Meanwhile, NBC News broke on October 2 that Kavanaugh had been aware of Ramirez's allegations before The New Yorker publication, despite his claims to the contrary. "Kavanaugh has testified under oath that the first time he learned about the accusation was in ‘the New Yorker story' that was published September 23," the media outlet wrote.

Commenting on the issue, Ortel has drawn attention to the fact that "NBC News, corporate-owned mainstream media, has been cheerleading for Democrats and against Trump for years."

"A man who retained diaries from his teenage years likely has excellent records concerning the recent past, so for the moment, I trust Kavanaugh's testimony and recollections," the Wall Street analyst emphasized.

However, he did not rule out that the Supreme Court nominee indeed had known about Ramirez's allegations before September 23, 2018. In that case, "that fact would weigh against him, though likely not fatally," Ortel elaborated.

© AP Photo / Alex Brandon
'Opportunist': Senate Panel Sheds Light on Kavanaugh Accuser's Sex Life
"The question for Senators is whether Judge Brett Kavanaugh is qualified to hold a seat on the US Supreme Court, based on his record as a lawyer, and as a jurist," he explained. "It certainly is not up to the Senate to select a Justice, or to reject a Justice, because that candidate shares or does not share the Senate's political beliefs. Only the President of the United States has the right to make that selection, and he did so, notifying the electorate years in advance, that Kavanaugh was a contender for this position."

The investigative journalist insists that Kavanaugh is a "standout selection": "For example, many of his decisions on the court where he now sits have been positively noted by the US Supreme Court and none of these have been overturned," Ortel remarked.

He suggested that "barring arrival of credible evidence of wrongdoing that can be confirmed, objectively," "the US Senate may vote to confirm Kavanaugh, perhaps within one week or less."