A shocking report released Monday by the Abdullah Al-Hourani Center for Studies found that Israeli forces killed 23 Palestinian protesters in Gaza, including seven children, in September, along with three people in the West Bank.

The IDF also wounded an astonishing 2,300 Palestinians that month in the Gaza Strip, West Bank and Jerusalem, the vast majority, 2,014 of them, in Gaza.

Radio Sputnik's By Any Means Necessary spoke with Palestinian activist Samer Makhlouf Wednesday about the report and about the state of Palestinian resistance following the Great March of Return and a distinct rightward turn by the Israeli government.

​"The brutality is increasing in a very serious manner," Makhlouf told hosts Eugene Puryear and Sean Blackmon over the phone from Palestine, noting that the IDF "is imposing measures that are very severe and the policy against the Palestinians and Palestinian activists," including nonviolent protesters, leaves them "faced with brutal power and force, and they [the IDF] are shooting, aiming to kill."

Makhlouf noted the past few months have seen a dramatic increase in head and chest bullet wounds, indicating that "Israeli snipers are aiming to kill activists." He said the international community gives the Israeli government free rein to treat Palestinians this way.

Despite the violence, Makhlouf noted, "Palestinians are more and more determined to raise their voices and demonstrate and protest" the occupation. "When you put the whole nation under military occupation… you do not expect this nation but to rebel, and exactly this is what is happening with the Palestinians."

Makhlouf noted one recent point of contestation was Israel's "nation-state" law, passed in July, which stipulates that only Jews have the right to self-determination in the country, effectively declaring an apartheid system. The law strips the 1.8 million Arabs in Israel of their national language rights as well, downgrading Arabic from a national language alongside Hebrew to the ambiguous category of "special status," NBC reported.

A massive protest estimated at 50,000-strong was held by the Druze community, another religious and ethnic minority in Israel affected by the law, in Tel Aviv in early August. Druze community leaders have petitioned Israel's high court numerous times since the law was announced, saying it "creates race-based discrimination, excluding 20 percent of the nation's citizenry and creating castes among Israeli citizens," Haaretz reported at the time.

Makhlouf said that last Monday, Palestinians "living between the River Jordan and the sea… organized a very big strike in order to express their anger… which shows us that we might be entering a new era of the Palestinians as a whole… uniting behind what could be one national agenda that refuses Israeli measures and starts demanding civil rights as a whole nation."

Makhlouf said that Palestinian demonstrations — near the Gaza border fence during the Great March of Return, for example — were intended to draw world media attention to their cause, to show that they are nonviolently struggling against oppression and occupation and that their free movement across the land is limited by Israeli and Egyptian forces. This directly challenges the Israeli narrative, which is that "these people are trying to attack us," he said. Makhlouf noted that this isn't a new narrative, either. 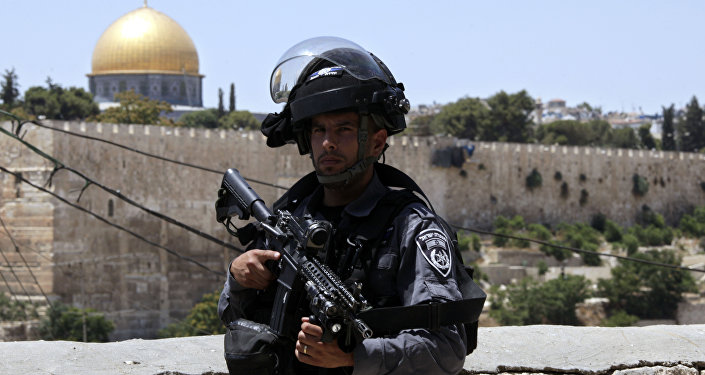 "It's only a matter of time" until the Israeli narrative is upended, Makhlouf said, "with the use of social media and free voices like your station, which is trying to explain to the American public… to show that the Palestinians are peace-loving people, and they would like to get their freedom and self-determination." He noted that social media means the Palestinians are no longer reliant on the mainstream media to tell their story accurately.

Israel, he said, is actually accelerating the demise of its narrative by insisting the Palestinian demonstrators are terrorists. "A 30-second video from the Gaza border or a demonstration might change the opinion of millions of people, because they might see lies in front of their eyes, how the Israeli army is acting against the Palestinians. Therefore, they will figure out they were fooled for a very long time, and the media was not showing the balance and the neutral story of what is exactly happening in this part of the world."

The activist noted that the Israeli army provides protection to settlers who burn Palestinian farmsteads, olive groves and city shops, as happened in Jerusalem Sunday when five Palestinians were attacked in East Jerusalem and many shops burned, WAFA Palestinian News Agency reported. Israeli soldiers deployed to the area refused to stop the attackers, instead firing tear gas and concussion grenades at the Palestinians defending their homes and businesses.

The Al-Hourani Center's report also noted that Israeli forces demolished 16 houses in the West Bank and Jerusalem in September and handed out 27 demolition orders for Palestinian homes and facilities.