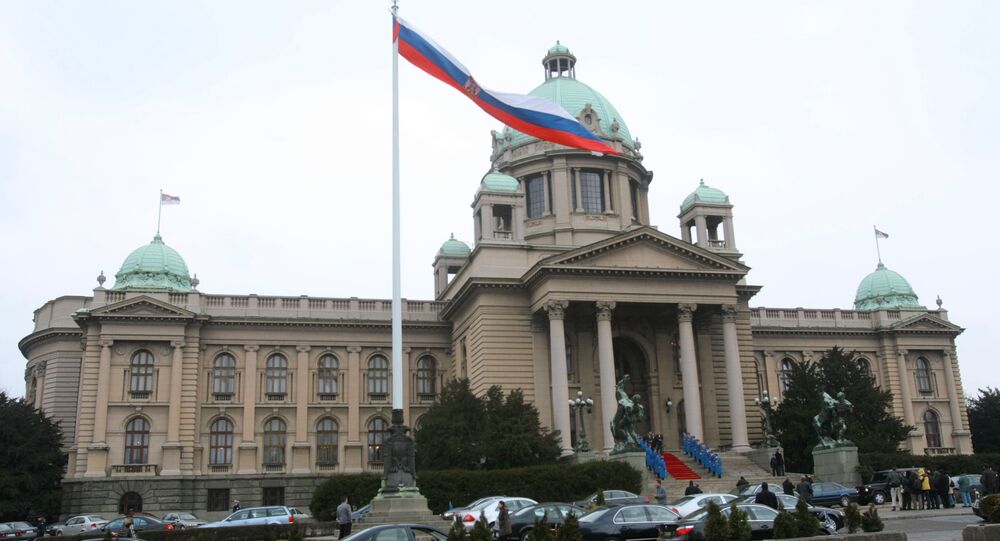 MOSCOW (Sputnik) - The recent tensions between Serbia and the self-proclaimed Republic of Kosovo show that the authorities on both sides are focused on their immediate political agenda rather than a sustainable solution to a decade-long conflict, Serbian opposition politicians told Sputnik.

Serbian President Aleksandar Vucic on September 29 ordered the country's army to be on high alert after Kosovo's special forces were deployed in the vicinity of Lake Gazivoda near Belgrade-controlled Gazivoda hydroelectric power station, local media reported, citing the Serbian presidential administration. Kosovo and Serbia are vying for the control of the lake and the station.

The Republic of Kosovo declared its independence from Serbia in 2008. However, a number of countries, including Serbia itself, Russia, China and Spain, among others, do not recognize its independence.

Authorities Working on Own Agenda

The incident shows the Serbian and Kosovar authorities pursuing their own political agenda rather than focus on everyday issues, Bosko Obradovic, the president of Serbian opposition Movement Dveri, told Sputnik.

"For several times already, the authorities in Belgrade and Pristina have resorted to similar means and connived to organize synchronized incidents to serve their daily political goals and distract public attention from burning issues related to their everyday life. The same thing happened with the recent arrest of the Director of the Office for Kosovo and Metohija, Marko D[j]uric, and the recent visit by President Vucic to the north of Kosovo," Obradovic said.

Djuric was detained by the Kosovar police in March and later expelled from Kosovo for allegedly having crossed the border illegally.

Vucic visited Lake Gazivoda in early September after refusing to meet with Kosovo President Hashim Thaci in Brussels. Thaci said that indirect talks through EU mediation had shown that there were still major disagreements between the two sides and they could not be settled fast.

Meanwhile, Obradovic believes that the authorities in Kosovo and Serbia do not want a "sustainable solution for the cohabitation of Serbs and Albanians in Kosovo and Metohija."

"The only thing they are interested in is to remain in power by faking conflicts and creating an atmosphere to deceive people into thinking that changing borders in the Balkans could be a sustainable solution," Obradovic said.

Velimir Ilic, the president of New Serbia party, said the heightened tensions could even be the result of a Belgrade-Pristina agreement benefiting Kosovo's president.

"Even though the background of this event, as [it is said] unofficially, is the agreement between Thaci and Vucic to animate the Kosovo electorate for Thaci's needs, this is a very dangerous game. We had the same situation with Vucic, who also went to Lake Gazivode for election purposes in order to animate his voters," Ilic told Sputnik.

President of Enough is Enough (DJB) political movement Branislav Mihajlovic believes that Serbia should stay on alert over what he said was a "cheap provocation" on part of Pristina.

"Deployment of special forces to Lake Gazivode is a sign of weakness and an immature political move by Pristina. Serbian authorities should remain on high alert, but should not buy into cheap provocations, as this one is. Diplomatic measures are always a preferred choice when dealing with tensions in Kosovo and Metohija," Mihajlovic told Sputnik.

The politician stressed that his party had proposed a draft law that could provide a lasting solution. Under this law, the relationship between Serbia and Kosovo would be modeled upon that between Denmark and Faroe Islands.

Obradovic said he was hoping that the presence of NATO-led Kosovo Force in the self-proclaimed republic should be balanced by the military presence of Russian forces.

"For years I’ve been advocating the military presence of the Russian forces in the Serbian territory in order to strike a balance between the powers in the Balkans, thus creating conditions conducive to a lasting and peaceful solution… A good place to start would be to grant diplomatic status to members of the Russian-Serbian Humanitarian Center in Nis, which the staff there are still unable to obtain from the Serbian Ministry of the Interior," the politician said.

The Russian Foreign Ministry on Monday condemned the lack of reaction to the Lake Gazivoda situation from the international peacekeepers in Kosovo. Meanwhile, NATO Secretary General Jens Stoltenberg on Tuesday urged for restraint, adding that the alliance was fully supportive of Serbia-Kosovo dialogue.