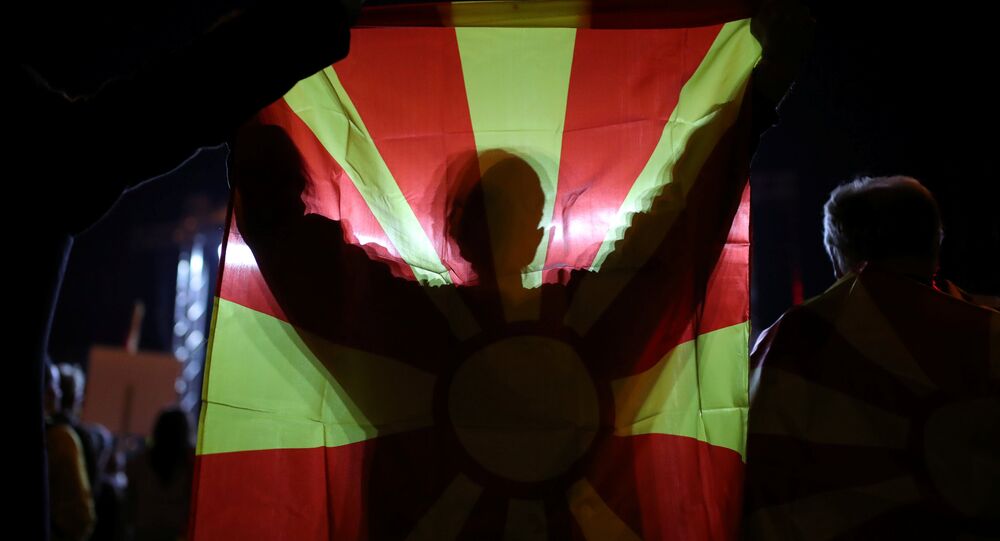 There are several reasons for NATO leadership's determination to take Macedonia aboard, observers told Sputnik, commenting on the September 30 plebiscite in the country. However, regardless of the alliance and Washington's enthusiasm over the vote, the referendum has prompted concerns in the West.

Macedonia's renaming will open the door to NATO for the country and allow the alliance to form a united anti-Russian front in the Balkans, says Konstantin Sivkov, a military specialist and member of the Russian Academy of Sciences.

"The NATO leadership is digging its heels in and creating a 'fence' along our western borders," Sivkov told Sputnik. "Last year, Montenegro, another Balkan state, was admitted [to NATO]. Thus, the alliance severed Serbia, a potential ally of Russia, from the Adriatic Sea. Macedonia is a landlocked country that borders NATO members — Greece, Bulgaria, and Albania. That is, the alliance forms a united front."

The military specialist did not rule out that NATO may use Macedonia as a foothold in case the US withdraws from the Intermediate-Range Nuclear Forces (INF) Treaty.

"[Macedonia] is well suited for the deployment of American missiles as the flight time to major Russian cities from the country is very small. Perhaps, elements of a global US missile defense will be deployed there," he presumed.

© AP Photo / Boris Grdanoski
Macedonia's Collapse to Be Worst-Case Scenario for Athens - Greek FM
Director General of the Center for Political Information Alexey Mukhin opined that Macedonia's admission to NATO would allow the alliance to beef up the American and British presence in continental Europe.

"NATO is taking over Europe in the interests of the United States," the scholar said. "There is no doubt that this processes will continue with regard to other countries. Ukraine is the next in line."

On the other hand, Sputnik military observer Andrei Kots believes that Western arms producers are planning to capitalize on the modernization of the Macedonian Armed Forces.

"[Macedonia's] armament, mostly of Soviet-Russian production, will have to be replaced with Western weapons," the observer noted in his op-ed. "However, some of this has already been done: the Macedonian military has long been using Western rifles — American M4 and M240 machine guns, German Heckler & Koch MP5 submachine guns, and Czech CZ 75 semi-automatic pistols."

© Sputnik / Dmitriy Vinogradov
NATO Pressure, Opposition Boycott: What's at Stake in Macedonia's Name Change Referendum
The armed forces of Macedonia are composed of three brigades — infantry, aviation and logistics, as well as the Special Operations Regiment, which includes the Ranger Battalion and the Special Forces Battalion "Wolves." The country does not have naval forces as it does not have access to the sea.

The country's military budget for 2018 is estimated at 6.4 billion Macedonian denars ($123.3 million), which is comparable with that of its neighbor, Albania ($169.4 million).

Kots remarked that it remained unclear whether the country's military would find resources to upgrade Macedonia's outdated vehicle park in case of its admission to NATO.

It's All About Name

Macedonia's name change referendum was held on September 30. Although the majority of those voting endorsed the change, just 36 percent of eligible voters took part in the plebiscite, with 50 percent needed.

On October 1, NATO issued an official statement saying that "in yesterday's consultative referendum, an overwhelming majority of those voting supported that path," adding that "it is now in the hands of politicians in Skopje to decide on the way forward."

For its part, the US State Department welcomed the vote, highlighting that Macedonia's name change would allow the country "to take its place in NATO and the EU, contributing to regional stability, security, and prosperity."

The U.S. welcomes the results of the Republic of #Macedonia’s Sept 30 referendum. We strongly support the Agreement’s full implementation, allowing Macedonia to take its place in @NATO and the EU, contributing to regional stability, security, & prosperity. https://t.co/FaBKpi7JaF pic.twitter.com/N9Ik6FyosI

​However, some Western mainstream media have expressed skepticism over the vote, with The Washington Post saying that the low turnout of Macedonia's plebiscite has "made things awkward for the West."

"The low turnout was seen as a blow not only to the efforts of the 'Yes' camp but also its vociferous backers in Brussels, Berlin, and Washington," the media outlet opined.

For its part, The Economist presumed that instead of sorting things out, Macedonian voters "have opened the door to instability and uncertainty."