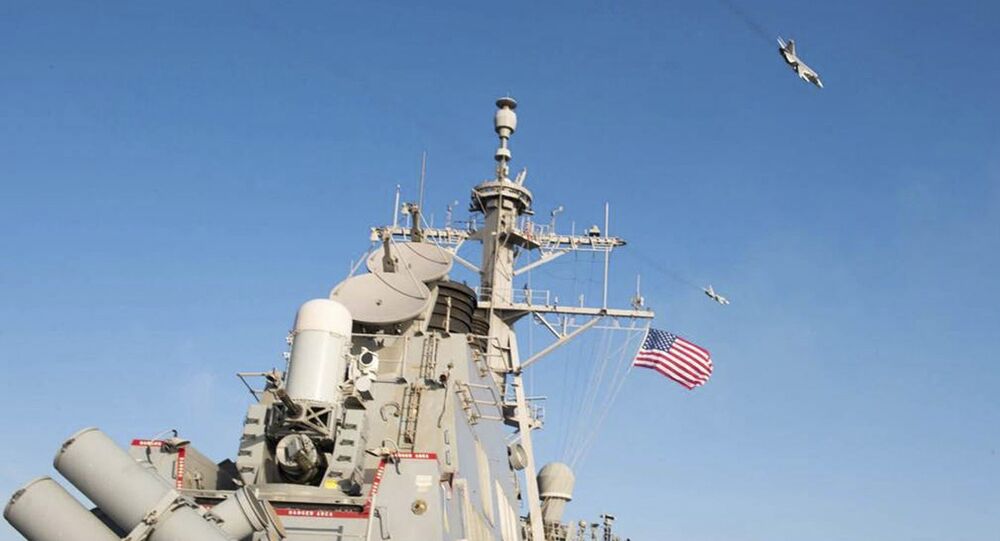 According to US Interior Secretary Ryan Zinke, a naval blockade of Russia could be an option to push Moscow out of the energy market. He also said that Russia needs to be dealt with through economic means rather than military ones.

Sputnik: What is your take on Mr. Zinke's comments? How likely is the Trump administration to actually impose a naval blockade?

Justin Dargin: First of all, we must consider that the Department of the Interior is not responsible for crafting the US foreign policy. Its mandate is the management and conservation of most of the federal lands and natural resources in the US, as well as relations with certain indigenous tribes. So, it's more or less akin to a ministry of natural resources that many other countries have.

Over the years, the department has had concerns centered around it relating to perceived ethical lapses as well as there have been calls to have it fully eliminated throughout its history. The Democrats have promised that if they win a House [in Congress] this November, then they will launch a series of probes.

The odds of the current administration following Secretary Zinke's statements, I would say, are between nil and zero.

Sputnik: Why did he even bother to come up with a statement like that, unless he wanted to make waves?

Justin Dargin: I can't put myself in his mind; what I did understand from his statement was [that he was] more or less focusing on the economic dimensions of it. So in the sense that the increase in the US shale oil and gas would perhaps constitute a de facto economic blockade against, let's say, Russia and Iran, whereby it would offset their exports to the EU and the US would be able to increase its exports.

That was more or less my take on it and I think that it was a bit of an offhand comment about a military blockade and I think in poor faith, perhaps.

Sputnik: And yet it did set off a sort of a hypothetical debate which can be curious, because when one wonders how realistic the option is and how much support Washington would likely receive from its allies, like Germany and Turkey. What do you think?

© CC0
Hungary to Continue Energy Cooperation With Russia Despite US Sanctions - FM
Justin Dargin: I don't think that there would be much appetite for a military blockade against Russia in the EU. We do have to recognize that it would be extremely dangerous; and if we look throughout history, typically blockades and embargos were normally considered to be an act of war.

In 1940, when the US implemented a blockade against Japan for oil exports, then Japan went to the Dutch East Indies. In terms of Russia, we can say that such an act would not be carried out due to the potential military consequences.

Justin Dargin: Most certainly. If we look at Iran, for instance, Iran has indicated that if there were any such actions that it would implement a block of the Strait of Hormuz, which is quite a critical drop point for global oil trade where nearly 30% of seaborne oil to the international market transits every day.

The US Navy may be able to reopen it after a period of weeks or even months, but at the same time, the shock to the global oil trade would be immense. I simply don't think that those in the current administration would have the appetite for that at the moment.

Sputnik: Some experts are wondering if there were US allies who would oppose the idea, would they be able to counter a potential move like this?

© AFP 2021 / OLI SCARFF
UK Needs US and Russia, NOT EU
Justin Dargin: As you know that the transatlantic relationship right now is perhaps not the strongest; it has been for some time. There're many notions flying around that the current administration is not necessarily giving much concern as to what the voices in the EU would think about as certain American international relations.

I would say that it would seem at this moment that many of the European allies, perhaps, would not be able to have such a strong say if the current administration were to go down that path, but it seems highly unlikely, though, that this would happen in the first instance.

Sputnik: I do have the example cited here like what recently happened regarding the situation with Iran when last week Russia, the European Union, and China agreed to a special payment system to avoid anti-Iranian sanctions; so certain joint moves can be taken.

Justin Dargin: Certainly. In the economic sphere most certainly because the EU, of course, has been against the current administration's policy of applying sanctions to Iran. So, in the sense of shielding many European companies for potential dealings in the Iranian economy, they have attempted to create an alternative payment system. That is entirely possible.

The thing is whether that could work in the short to mid-term is up in the air, seeing that more or less the global financial infrastructure is still predicated on dollar payments. Perhaps, in the long-term, that could be quite a viable policy for European companies, but in the short to mid-term, I think that many European companies would still be quite afraid to deal with Iran, even given that the EU could create an alternative payment system.

Views and opinions expressed in the article are those of Justin Dargin and do not necessarily reflect those of Sputnik.

Moscow: US Pressure on Europe Over Energy Cooperation With Russia 'Unacceptable'