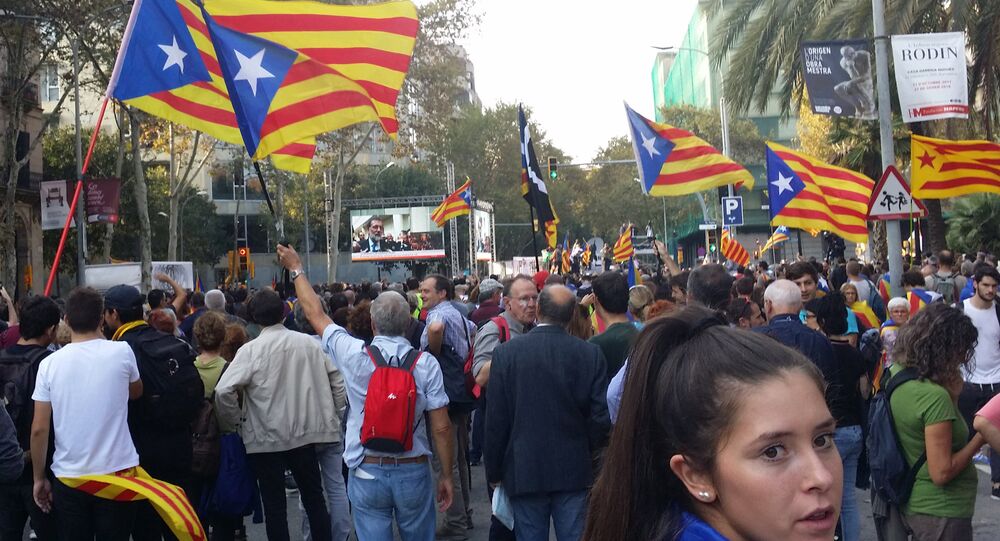 Catalonians are marking one year since their independence referendum last October, where 90% of voters supported Catalonia's secession from Spain.

The Spanish government has refused to accept the results of the referendum, imposed direct rule over Catalonia and dissolved its parliament. Meanwhile, 24 people were injured in clashes that erupted in Barcelona on Saturday ahead of the anniversary.

Radio Sputnik discussed the clashes in Barcelona with Marc Sanjaume, professor of political science at Pompeu Fabra University in Barcelona and adviser at the Self-government Studies Institute with the Catalan government.

Sputnik: What is the situation in Barcelona like right now? We're watching the updates and, apparently, there are more rallies planned.

READ MORE: Chances of a New Vote in Catalonia Are Zero — Scholar

Sputnik: How would you describe the emotional state of people who turn up for these rallies? I'm guessing that emotions are running high.

Marc Sanjaume: There is a lot of emotion. There's a lot of memory of what happened last October 1. People that took part in that referendum and mobilization last October felt aggressed by the Spanish government; the Spanish government used violence against citizens that were peacefully waiting or defending the polling stations against those police forces that were going to seize the ballot boxes and voting ballots.

So there's this mixed feeling of anger, but also questions; people want answers to the political situation and there are no answers. So people are also waiting for political events coming ahead.

Sputnik: I'm guessing that people are, probably, also feeling disappointed, perhaps, to a degree, cheated out of something that they were hoping would happen. What's a man in the street saying these days?

Sputnik: Now that a year has passed, to some degree have died down; some people, perhaps, feel too disappointed to continue. Would you say that the Catalans are still united in their bid for independence?

Marc Sanjaume: I would say that this 45-50 % of the Catalans that support independence are still there. Of course, last year they mobilized and there was a common objective. The common objective was supporting independence on October 1; this was possible because of these citizens' mobilization and the social movement also supported and organized by the Catalan government.

Now there is more disagreement on how self-determination should be achieved. Given the fact that the Spanish government is still denying this right to the Catalan people, there're different ideas on how the Catalan government could continue this demand and could organize new political events.

© AP Photo / Manu Fernandez
LIVE UPDATES: Situation in Catalonia on Independence Referendum Anniversary
We should also take into consideration that the political leadership that was in the government at that time is now at different places physically — some of them are in Brussels, others are in different jails here in Spain, in Catalonia. So, this political elite has somehow physically divided and they're facing trial and very serious accusations.

Sputnik: The Catalan government has already called for a new referendum; what are the odds that this would be conclusive? You've mentioned that new strategies are required; how likely is Catalonia to build up momentum for another vote?

Marc Sanjaume: I wouldn't say there's a new vote in the short term; there won't be a new referendum in the short term. There was a referendum last October, and the Catalan government is now analyzing the situation and building regional structures and working as a regional government within the Spanish state. What I see is that the new socialist government in Spain is more keen to a political dialogue than the former conservative government.

So, in the following months, we could see some talks and some negotiations between the Spanish and the Catalan governments. Of course, it's difficult and the situation is very polarized.

The views expressed in the article are solely those of Marc Sanjaume and do not necessarily reflect those of Sputnik.