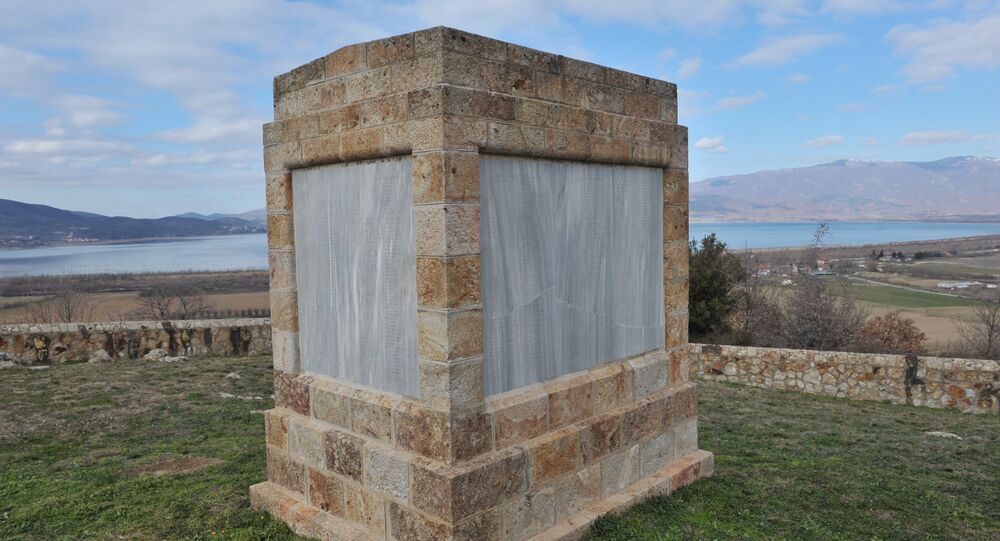 Everybody knows about the Western Front but one campaign has been almost erased from history. Sputnik spoke to Alan Wakefield, from the Imperial War Museum, about the Salonika Front, where British, French, Russian, Greek, Italian and Serbian troops all fought on the same side.

Ambassadors and dignitaries from Britain, France, Russia, Greece, Serbia and Italy are on their way to Macedonia where ceremonies will take place on Saturday, September 29, and Sunday, September 30, to mark the 100th anniversary of the Armistice of Salonika.

Alan Wakefield, Head of First World War and Early 20th Century Conflict at the Imperial War Museum in London, will be with a party of 28 — including some descendants of Salonika Front veterans — attending various ceremonies on the old frontline over the weekend. Almost 5,000 British Empire troops lost their lives in the campaign.

Mr. Wakefield said the Bulgarians were held in high regard by the Allied commanders during and after the war and General Vladimir Vazov was invited to London in the 1920s and met Salonika Front veterans and his old adversary General George Milne.

"When the Bulgarians fought the British and French it was quite a gentlemanly war. They would let us play football and we would let them fish in the lake without being shot at. Stretcher bearers were allowed to come and pick up the dead and injured. It was a lot less pleasant when the Bulgarians fought the Greeks or Serbians because of the old antipathies," said Mr. Wakefield.

Mr. Wakefield said Bulgaria was the first of the Central Powers to surrender in September 1918 but only after three years of intense fighting on a now almost forgotten front in northern Greece and what is now Macedonia.

"Bulgaria got involved in the war on the Germans' side because it had lost territory in the Second Balkan War — what is today Macedonia — and wanted to win it back from the Serbians. In 1915 they were waiting on the sidelines and it was easier for Germany/Austria-Hungary to offer it to them because they controlled Serbia at the time…King Ferdinand of Bulgaria was quite opportunistic," Mr. Wakefield told Sputnik.

After Archduke Franz Ferdinand was assassinated in Sarajevo in the summer of 1914 the Austro-Hungarian Empire declared war on Serbia and eventually, with a lot of German help, invaded and occupied most of the country.

In the fall of 1915, the Serbian army retreated across Albania, was rescued by British and French warships and taken to Corfu and North Africa.

The Salonika Front, as it became known, was launched in October 1915 when two divisions of British and French troops were landed at the Greek port of Salonika.

The allies marched north and took on the Bulgarians but were forced to retreat and then dug in a 70-mile line of trenches north of Salonika.

Thanks to 🇬🇧 🇫🇷 🇬🇷 for remembering Serbian 🇷🇸 army and their achievements in Great War!

British and Anzac forces were fighting the Turks further east, at Gallipoli, and Laurence of Arabia's derring-do in the Middle East was also creating havoc for the Ottoman Empire.

Both of these campaigns were far more likely to feature in the British and French newspapers than the Salonika Front.

There was only British war correspondent covering the front — the Daily Mail's George Ward Price — and the only official photographer was withdrawn in March 1917 just as the fighting was hotting up.

One of the few stories which did make the press was the death of Katherine Harley, a maverick English nurse who just happened to be the sister of the General Sir John French, head of the British Home Command.

"She had joined the Scottish Women's Hospital who had volunteered to offer medical help to the French and Serbian troops but she fell out with their hierarchy in 1916 and ended up running an orphanage in Monastir (now called Bitola) just inside Serbian Macedonia. Monastir had been liberated from the Bulgarians but their artillery was still shelling the town," Mr. Wakefield told Sputnik.

"Mrs. Harley was sitting at a window in her quarters when she was struck by a fragment of a shrapnel shell, and was found by her daughter lying on the ground," the British Journal of Nursing reported in March 1917.

"Medical aid was at once given, and everything possible was done to preserve the precious life of this noble daughter of the great humanitarian British people who has fallen a victim to Bulgarian barbarity while engaged in the noble humanitarian duty which she accomplished with supreme self-sacrifice and the purest Christian love," it added.

"She was given a Serbian state funeral, which was attended by the Crown Prince and several Serbian generals and politicians. Her grave at Lembet Road cemetery in Salonika is a strange one. She is in the Commonwealth War Games Commission plot but she has the original Serbian headstone, in Cyrillic, and their own memorial cross," Mr. Wakefield told Sputnik.

In July 1916 a British Pathe newsreel showed the arrival of 20,000 Russian troops in Salonika, where they were greeted on the quayside by a British military band and saluted by the French General Maurice Sarrail.

A Serbian solider lighting a cigarette to a captured Bulgarian soldier at the Salonica front pic.twitter.com/Xz7mGuVW5L

Long after the fall of the Tsar, there were still 18,000 Russian troops on the Salonika Front and the last Russian soldiers only left Greece in early 1918.

By the spring of 1917, there were seven British divisions, six French, six Serbian, three Greek, one Italian and two brigades of Russian troops on the front and the allies began advancing on the Bulgarian lines.

"The Bulgarians were supported by German officers, some Austro-Hungarian troops and some Turkish soldiers, but it was the Bulgarians who bore the brunt of the fighting," said Mr. Wakefield.

Supplying the Anglo-French force so far from home was always difficult and German submarines in the Mediterranean hampered it as much as possible.

“In glorious memory of 418 officers and 10,282 other ranks of the British Salonika Force who died in Macedonia and Serbia 1915–1918 and to commemorate 1,979 of all ranks who have no known grave… They did their duty” #LestWeForget #WW1 #SalonikaFront pic.twitter.com/Y20rpiyjHC

In August 1918 a French troopship, the SS Pampa, was sunk by a U-Boat en route from Malta by with the loss of 117 lives.

French General Louis Franchet d'Espèrey, who had suffered a terrible defeat at German hands at Chemin des Dames on the Western Front in May 1918, was sent to take over the Salonika Front in the summer of that year and laid the ground for eventual victory.

"D'Esprey knew the Balkans well and he traveled all the frontlines meeting all the commanders, including the Serbian General (Živojin) Mišić. D'Esprey thought he spotted an opportunity in a chain of mountains 7,000 feet up — the Moglena Mountains. The Bulgarians had not thought anyone would be crazy enough to attack there and their defenses weren't great. The other advantage was that if you broke through there then there was only a big flat plain before you got to Skopje," Mr. Wakefield told Sputnik.

"The Bulgarians by this point were war-weary. On the home front, their agricultural produce was being sold to the Germans, who were treating them more like an occupied country than an ally. The Bulgarian government was trying to distance itself from Germany," Mr. Wakefield told Sputnik.

French and Serbian troops were chosen for the attack at what became the Battle of Dobro Polje while British soldiers were engaged with Bulgaria's elite regiments at Doiran, further east. 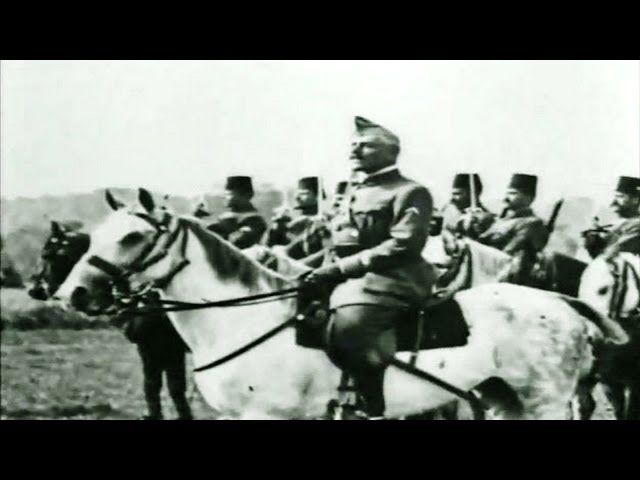 "Doiran is like the Bulgarian Verdun. Their elite troops, the Ninth Division, held it because it protected mountain passes leading to Bulgaria. They stayed firm and for that they are seen as a quite iconic formation. The Bulgarians held the line at Doiran. The British were getting malaria and influenza but it meant the Bulgarians were not able to support the line at Dobro Polje," said Mr. Wakefield.

"Eventually the Bulgarians were forced to pull out of Doiran and as they began retreating they were strafed by the RAF and it caused a rout. Within two weeks of the launch of the offensive the war has ended," Mr. Wakefield told Sputnik.

Do you know why they became refugees? Because your Bulgarian brethren that coveted Macedonia joined the Germano-Austrian alliance in WW1 and attacked Greece. Their villages were on the Salonica front.https://t.co/onhtpiPtlZ pic.twitter.com/h4tyOWmnDv

"The British were the first into Bulgaria and it's our troops who meet the armistice delegation coming down the road with a white flag," Mr. Wakefield told Sputnik.

"Bulgaria is the first of the Central Powers to collapse and it starts to get reported in October 1918 but then the Germans start collapsing and that's a far bigger story. There were three million soldiers on the Western Front, so Salonika was pretty small in comparison," Mr. Wakefield told Sputnik.

Mr. Wakefield said King Ferdinand abdicated as the allies advance on Sofia and he was replaced by Crown Prince Boris, who had become a "national hero" because of his role at the front.

"Bulgaria had to evacuate all of the occupied territory and it would eventually (under the Treaty of Neuilly) lose its coast on the Aegean Sea to Greece but it avoided the reparations which Germany was ordered to pay," said Mr. Wakefield.

Ironically in World War Two the Bulgarians made the same fateful mistake and joined the Axis powers, briefly occupying the Aegean coast and Macedonia again before being defeated and occupied by the Soviet Red Army.

Salonica (Thessaloniki), The Macedonian Front, May 1917. The man on the right is my paternal grandfather. pic.twitter.com/gwsUHqOD55