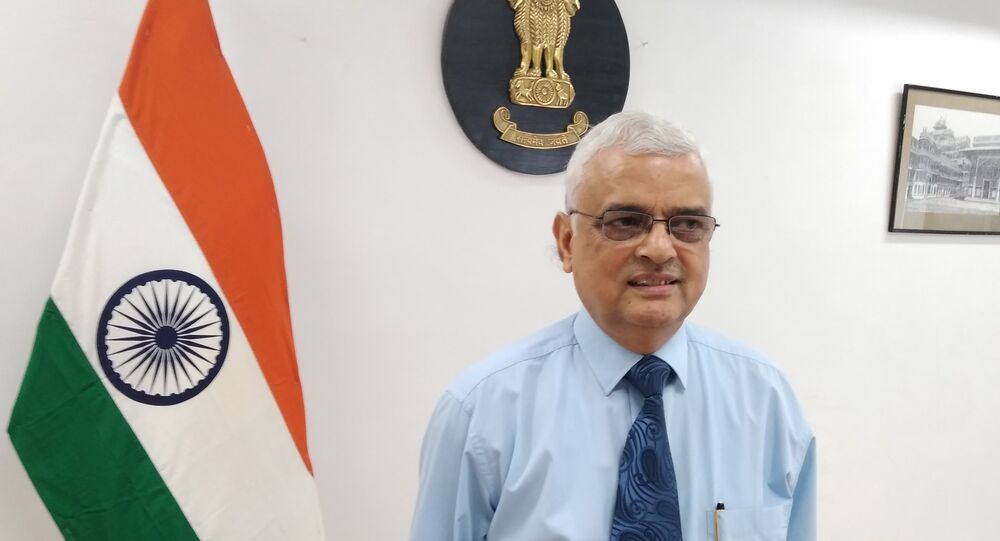 “Hackers do not have a particular nationality. They could belong to anywhere. That is what technological advancement is. They disrupt democratic processes when they find no constructive roles to engage in,” India’s Chief Election Commissioner OP Rawat told Sputnik in an exclusive interview.

New Delhi (Sputnik): Om Prakash Rawat who is currently holding the constitutional post of India's chief election commissioner (CEC) says the apex election body is working on a war footing for the credible conduct of the general election due in a few months from now. India's general election is the world's largest polling process, given the sheer number of voters. In an exclusive interview with Sputnik, Rawat said that although technology has positively revolutionized the process of voting and voters' behavior, many challenges remain.

A retired Indian Administrative Service (IAS) officer, Om Prakash Rawat is a postgraduate in physics from the prestigious Banaras Hindu University (BHU). During his interaction with the Sputnik team, he made it a point to vividly remember his student days when he learned basic Russian from important physics texts published from the erstwhile USSR.

© East News / AP Photo/Mukhtar Khan
Election Candidates in Violence-Hit Indian State to Receive Life Insurance
Sputnik: Your office would soon be taking up the world's most mammoth electoral exercise — the general elections 2019 to India's Parliament. What are the focus and the priorities of your office in the run-up to the elections?

OP Rawat: Our priority number one is preparedness, so we begin on February 18, 2019, according to our calendar. The second priority is to ensure that all the eligible voters get enrolled on the electoral rolls and they are motivated enough to come out and vote during the elections. Our voter base is very huge — 879 million voters — and we still feel that some voters are not on the rolls.

Sputnik: There is an ongoing debate around  the 'one nation one election' theory in India. What is the present status of the demand to hold elections to the center (Parliament) and states (provincial assemblies) simultaneously and is the ECI prepared for that?

OP Rawat: Actually, the election commission was asked about the 'one nation one election' in 2015 and the election commission has suggested that certain amendments to the constitution of India, certain amendments to the Representation of the People Act 1951, need to be carried out before we even think of 'one nation one election.' Once this legal framework is in place then the ECI will embark on providing for logistics. Once the legal framework is in place we will have no hurdle, no issue, and all these things can be resolved.

© Sputnik / Natalia Seliverstova
Facebook to Have Provisions for Monitoring Political Ads in India
Sputnik: The apprehensions of the political parties on the credibility of the Electronic Voting Machines (EVMs) seem to have been settled more or less. Has it now been completely decided that India will never revert back to the paper and ballot polls?

OP Rawat: One can't guarantee that it will never happen, because the ECI's mandate is to have all the stakeholders, all the political parties, on board for elections and that's why every year we meet them, take their suggestions and we try to address all their concerns comprehensively and squarely so that they are happy and satisfied with the available processes, available systems, available technology. The ECI ensures that there is faith and confidence in the whole process.

Sputnik: The ECI has a unique way of sensitizing people about the right to vote. Of late, the ways of sensitization have changed; technology has taken over. How do you perceive this change?

OP Rawat: We are aware of our population mix. We have a sizable population still untouched with technology and therefore we use folk media. And all those who are connected to social media or to the internet, for them, we do not hesitate in taking up every technological platform available for reaching out to them for ensuring that they are brought on board, they are motivated to enroll, they are motivated to vote.

I can take pride in this that the developed democracy of Australia, which has compulsory voting, they record 82 percent polling with compulsory voting. We (India), do not have compulsory voting, it's voluntary and we record in many states 84 percent, 86 percent, 90 percent and in fact, in the general elections of 2014, we recorded close to 65 percent voting.

Our motto is 'no voter is to be left behind' and so we take all steps to ensure that all voters are on board.

© CC0
India's Election Commission Calls Facebook Data Breach Row as Mere 'Aberration'
Sputnik: These days, a variety of news is generated on social media platforms, some genuine, some fake.  They nevertheless have a significant influence on voters' behavior. How is the ECI gearing up to address this issue?

OP Rawat: The recent threats, like that of Cambridge Analytica, data harvesting through social media platforms, profiling [and] targeted communication affecting voter behavior is being addressed.

We took this challenge up and our group of officials met the local heads and regional heads of most of the social media platforms like Facebook, Twitter and they readily agreed to ensure that during the poll period nothing adverse, disturbing the level playing field is on their platforms. In fact, they will be putting fact checkers to stop fake news; they will be putting a flag with the name of the sponsor, the cost of advertisement on all the (election) advertisements. And during last the 48 hours before the conclusion of the poll, including that silence period, they will ensure that nothing about elections is on their platforms.

With those commitments in place, we are comfortable from that risk and this has been tested in recent Karnataka elections where nothing of this sort could happen.

© AFP 2021 / NOAH SEELAM
Russia Rejects Indian Election Hacking Plot Slur
Sputnik: A professor of Oxford Institute made a statement recently that Russian hackers may soon make their way to the upcoming general elections in India. Your comments on this charge?

OP Rawat: Hackers do not have a particular nationality. They could belong to any part of the world. After all, that is what technological advancement is. If they find no constructive role to engage in, they go ahead with this kind of destructive activities that adversely affect the democratic processes like elections.

We have insulated ourselves and empowered our machinery in a manner that nobody from any corner of the world can influence our elections in any adverse manner and that's why we have taken the initiative of the 'c vigil' (citizen vigilance) — a mobile application which empowers each and every voter, each and every citizen of this country to ensure that anything wrong is noticed. We believe in empowering the voter and our machinery against all such outside influences.

© AP Photo / Prabhjot Gill
Indian Election Office Slams Losing Parties' Claims About Rigged Voting Machines
Sputnik: The Supreme Court of India, in a verdict recently, said that the election candidates in India must make public their criminal background and put it on the party's websites. Is the ECI putting up a separate mechanism to ensure compliance?

OP Rawat: The commission has already tasked our secretariat to ensure that necessary amendments to reforms, which are required to be filled in affidavits, should be formulated comprehensively to implement the honorable Supreme Court's order and we will further issue guidelines for implementing all the directions in forthcoming state elections.

Sputnik: Lastly, any word from you for the foreign media covering the upcoming elections in India?

OP Rawat: My request to all the representatives of international media covering our elections would be "come with an open mind."

You may come with very deep insights into all the processes and see at the micro level what can affect this democratic exercise adversely, bring it up to the knowledge of the people to enlarge and put it in public domain so that the commission can take effective steps to address those challenges and deliver free, fair and credible elections.