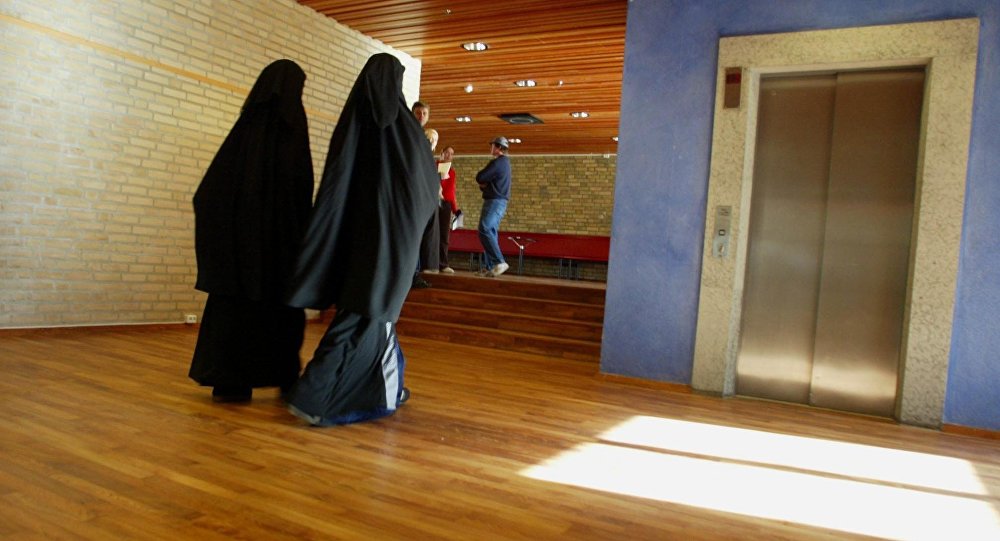 Voters in Switzerland’s St.Gallen canton overwhelmingly voted to prohibit face-covering garments in public, with 67% supporting the ban. Last year, lawmakers in St. Gallen issued a new law under which any person who renders themselves unrecognizable by covering their face in a public space and thus endangering public security will be fined.

A national referendum on the burqa ban may be held next year after the right-wing Swiss People's Party gathered 100,000 signatures required to have it put to a vote. Sputnik discussed this with Vavra Suk — Editor in chief of the Swedish newspaper "Nya Tider".

Sputnik: Tell us what you think of the decision to possibly have a vote on a nationwide burqa ban in Switzerland?

Vavra Suk: I think you need to see that in a bigger context. I think the people who voted against the burqa; they really don't want non-European immigration period. It's not really about the burqa.

© AP Photo / Fred Ernst
Swiss Region Overwhelmingly Supports 'Burqa Ban' in Public Places
In England, there were people collecting signatures against building a mosque and they found out that it was much easier to get signatures if they said this was because there would be a lot of cars and there would be a parking shortage and that's why they didn't want the mosque. It was much easier; people are afraid to say 'we don't want this culture or this religion, we don't want these people here', because they're afraid of being called racist, and so they find other ways to express that.

The burqa and the mosque are the most visible symbols of how foreign immigration is and that's how it's targeted.

Sputnik: Are the sentiments quite similar in Sweden?

Vavra Suk: Yes, but in Sweden, I would say there's a rift between people who want immigration and who don't want it, and the media has hyped this very much. it's surely not about politics anymore, it's really strongly between people. It's not about political issues, it's about being good and being evil; so this splits families, it splits friendships, it's a very, very hot topic.

Sputnik: 67% voted in one of the cantons to support the burqa ban. Is that necessary? Do you think a burqa ban is always anti-Islam, is it always anti-migrant? Some from the left would say that we're just about women's rights, we feel that this is imposing on women's rights…

Vavra Suk: Sometimes people say that this is about problems with driving because you can't see very well with the burqa, or identification, or communication between people, but I think that the people who vote, for them the burqa symbolizes a totally different way of living when the woman is more or less the property of a man, so yes, in a way, but also you can see that in Sweden, and Sweden is well known for its feminist agenda, gender studies and so on, but  actually the feminists don't want the burqa ban.

© REUTERS / Dado Ruvic
Swedish Watchdog Rings Alarm Over 'Sharia Banks' After Reported Daesh Transfer
They glorify the Muslim family, it's quite funny to see how immigration is always more important than feminist ideas, we even had feminists who've dressed in a burqa to show sympathy with the burqa wearers. I've read an article, an opinion piece, from a feminist in Sweden that said that it's so nice in Muslim families where the women if you have polygamy with several women, they can share the kitchen work, they can share tending to children, so it's quite a hypocrisy to me.

Sputnik: That seems very strange for feminists. I think a feminist would be more likely to say that women can share the responsibilities with their male mates…

Vavra Suk: Yes, but in Sweden the feminists, the really hard-core feminists, they don't even want white men, some of them say that the world would be better if there were no white men in the world, so I guess a Muslim family could be a way to achieve that.

Sputnik: How many countries now in Europe actually have burqa bans? And how do you fit this in? Obviously, some forms of Islam, some more orthodox Islamic views are seen as more threatening by some Western civilizations, you have to admit that burqas are not very far from the clothing that nuns wear in the Christian faith…

Vavra Suk: Yes, sure, there's always the discussion about the veil that doesn't cover the face, it just covers the hair, and that is very comparable to Christian nuns, and with Christian nuns no one ever questions it, and I don't think anyone would question it if there were people coming from foreign countries as tourists wearing a burqa, no one would really care, but this is on a scale when it's affecting ordinary people; it's on a scale where you can't really avoid the impact on society, so that's why you have these reactions.

The views expressed in this article are those of Vavra Suk, and do not necessarily reflect those of Sputnik.