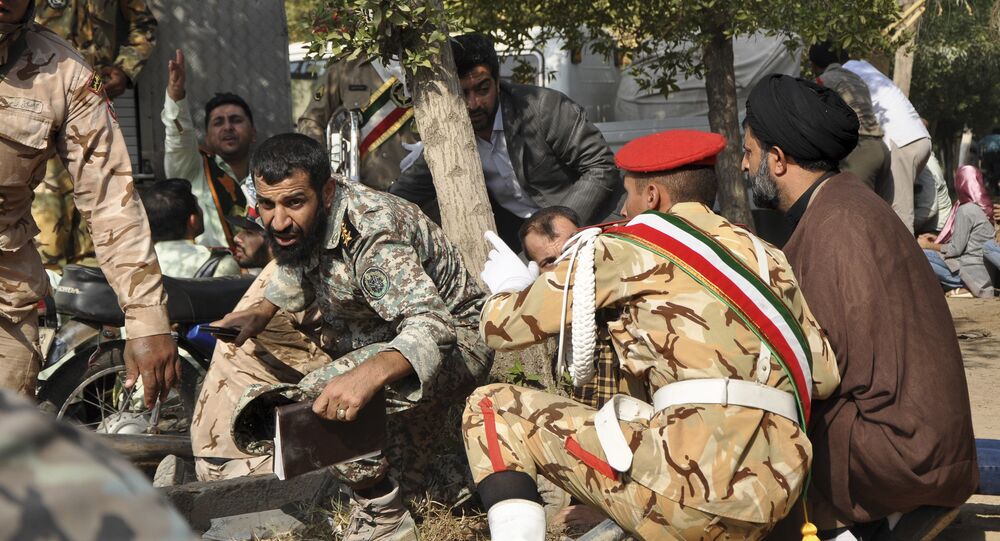 Following the deadly attack in the Iranian city of Ahvaz on Saturday morning, which killed 25 and wounded 53 during a parade commemorating the 38th anniversary of the beginning of the Iran-Iraq War, terrorist group al-Ahvaziya, which is registered in the Netherlands but has ties to Saudi Arabia, claimed responsibility for the attack.

The attack was carried out by an unknown number of assailants on Saturday morning during a parade of the Islamic Revolutionary Guard Corps (IRGC), Iran's elite paramilitary formation, 12 of whom were killed by the terrorists. The parade went through Ahvaz, capital of Iran's southwesternmost province of Khuzestan, where much of the Iran-Iraq War was fought.

© CC BY-SA 3.0 / w:User:Coolcaesar / United States Department of Justice
US Indicts Two on Allegations of Spying for Iran on MEK Members in US

"Terrorists recruited, trained, armed and paid by a foreign regime have attacked Ahvaz," Iranian Foreign Minister Javad Zarif wrote on Twitter Saturday. "Iran holds regional terror sponsors and their US masters accountable for such attacks. Iran will respond swiftly and decisively in defence of Iranian lives."

On Monday, IRGC Lieutenant Commander Brigadier General Hossein Salami blamed Israel, the United States and Saudi Arabia for the attack, promising a "devastating" response to the attackers and their sponsors.

Massoud Shadjareh, the founder of the Islamic Human Rights Commission, and Mohammad Marandi, an expert on American studies and postcolonial literature who teaches at the University of Tehran, joined Radio Sputnik's Loud & Clear to discuss the attacks and the potential perpetrators.

​"Last year, the Saudi crown prince, Mohammad bin Salman, said, ‘We need to take the war against Iran inside Iran.' After that, ISIS [Daesh] attacked Tehran, and we know that ISIS and the Saudis, from long ago, have a very strong relationship," Marandi said.

He noted that after the attack, a spokesperson for al-Ahvaziya went on a Persian-language station, Iran International, which is funded by Saudi Arabia, and took responsibility for the attack.

"An advisor to the UAE crown prince also tweeted that this was not a terrorist attack, that a decision has been made to carry out these attacks inside Iran," Marandi noted.

"So the evidence has been provided by Saudi Arabia and the UAE."

Marandi said that later in the weekend, a video appeared on Daesh's Amaq News Agency claiming responsibility for the attack, but that the video both unusually contained incorrect information about the attack and lacked a specific attribution to Daesh. He speculated this signalled some kind of cooperation between Daesh and al-Ahvaziya.

Shadjareh noted that al-Ahvaziya is "inspired by the Gulf states" and that former Iraqi President Saddam Hussein, who was overthrown by the US invasion in 2003, had supported "this sort of Arab nationalism." Khuzestan has a large Arab population, and the 1980 invasion of Iran by Iraq focused primarily on conquering the province. Hussein believed the region's Arab population would rise up and support the Iraqi army, but instead, they put up fierce resistance. By 1982, the Iranian army had pushed the Iraqis out of Khuzestan, but in the retreat, Hussein deployed a scorched-earth policy that devastated the region. The once-prosperous oil refining city of Abadan, which sits on the border with Iraq, has never fully recovered from the war.

When Riza Shah Pahlavi rose to the Persian throne in 1925, ending the reign of the Qajars and beginning the Pahlavi dynasty, his sharp attitudes against tribal autonomy provoked an uprising by Arabs in Khuzestan, and many others followed through the 1940s. When the Pahlavi dynasty fell in the chaos of the 1979 revolution that created the Islamic republic, it renewed nationalist sentiments in the region, as well as among many other ethnic groups inside Iran, including Kurds and Baluchs. The uprising in Ahvaz was repressed with about 100 casualties on both sides.

But Shadjareh said al-Ahvaziya are not really nationalists; they're simply the result of "people with deep pockets" in Saudi Arabia and the UAE, whose leaders masquerade as an NGO at international functions.

"What is very clear is that the rhetoric that has been articulated by the Trump administration, by the Saudis, by Emiratis, is now being put into action. And the international community has really failed to identify this as what it is — indeed, an act of terrorism," he said, indicating that the media had also failed to cover it as such.

The conversation then turned to the subject of MEK, a group designated as a terrorist organization by the US State Department from 1993 to 2012 but now touted by US neoconservatives as an alternative to the Iranian government.

On June 30, former New York City Mayor and now US President Donald Trump's personal lawyer Rudy Giuliani spoke in Paris to a rally by the National Council of Resistance (NRC) in Iran, an umbrella organization controlled by the MEK, the Guardian reported at the time.

Marandi noted that the MEK fought on behalf of Iraq and operated as Iraqi intelligence during the Iran-Iraq War. Even though it was considered a terrorist organization in the 1980s in the West, it was still allowed to open offices in many Western countries under different names. Only recently has it been recognized as a "legitimate organization," Marandi said.

Marandi also noted that the MEK is "very close to the Israeli regime," citing as one example a "fake laptop" that supposedly belonged to an Iranian nuclear scientist was supplied to the MEK by the Israeli government. That laptop was later used by the US government in 2005 to argue the case for the existence of a covert Iranian nuclear weapons program, although the information on the computer was later shown to be fraudulent.

"These people carried out huge attacks on Tehran," Marandi said, "so we Iranians have very sharp memories, very dark memories about this organization."

Shadjareh likewise noted the MEK had committed "war crimes against Kurdish communities and Shias in the south, as basically foot soldiers for Saddam Hussein," though it's unclear whether he means Iraq's large Shiite community, which was heavily oppressed under Hussein, or Shiites in Iranian Khuzestan during the Iraqi occupation.

"They have shown in their whole history they're willing to be sold to the highest bidder," Shadjareh said. Noting how MEK is recognized worldwide for its brutality, Shadjareh pointed out that the US nonetheless now represents this group "as the hopeful for bringing democracy to Iran."

The United States and the West are "so desperate," he said, "they're now supporting the most unsavoury groups and encouraging them."

'When it Comes to Iran, US has no Strategy' - Expert