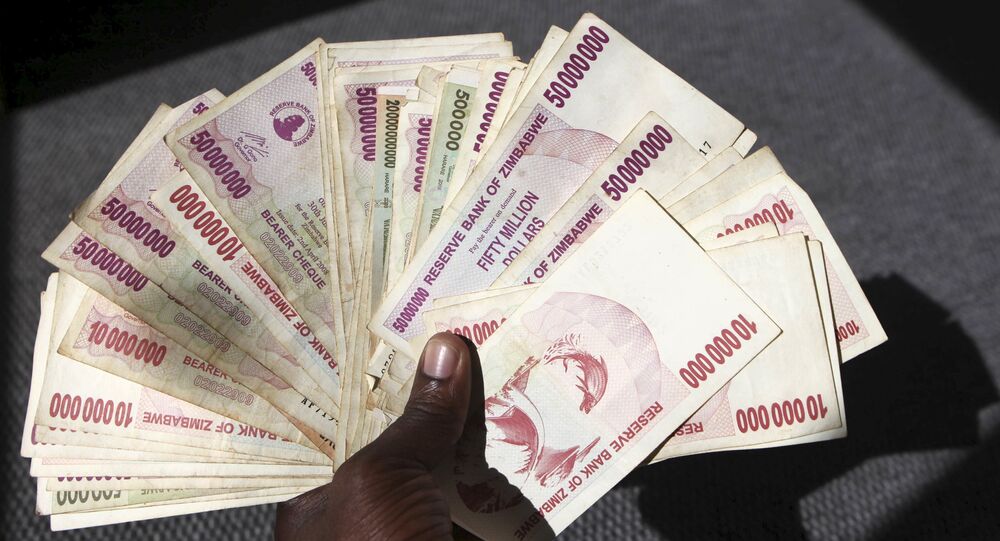 The new Zimbabwean government is pledging to bring their country back on track to economic prosperity and buoyant development by attracting foreign investment, reforming domestic finances, and paying off the nation’s debts – but officials don’t appear to be quite sure just where to start.

Kristian Rouz – Zimbabwe is bracing for an economic resurgence following a general election earlier this year that brought to power a reforms-minded team of policymakers. Zimbabwe’s new finance minister Mthuli Ncube says a ‘fiscal shock’ is necessary to overcome the years of hyperinflation and bring the nation’s dysfunctional public finances back in order.

Ncube proudly refers to his programme of economic reforms as the ‘big bang’, stirring hopes of economic resurgence in Africa’s once-prosperous agricultural nation. Zimbabwe’s farming, however, fell into disarray following last decade’s controversial land reform, which deprived primarily white farmers of a significant portion of their land for the sake of social justice.

“My preference is a fiscal shock, but there is a what you call the political collar or the politics of policy making which then slows you down”, FM Ncube said. “My preference would be more of a big bang approach because every day counts in terms of cost”.

Ncube joined Mnangagwa’s cabinet earlier this month after working in the banking sector for years. He immediately weighed in on Zimbabwe’s most acute problems – the 80-percent jobless rate, along with the hyperinflation, running at thousands-percent each year.

The new cabinet has admitted these were enabled by the left-wing policies and economic experiments of former President Robert Mugabe, whose past as one of the leaders in Communist guerrilla ZANU during the colonial and apartheid periods had greatly determined his economic policies.

Ncube suggested in order to tackle the dangerously-high unemployment, Zimbabwe would require a significant influx of foreign investment and domestic private-sector investment.

Whilst the former could come from Mainland China as part of its ‘yuan diplomacy’ or the ‘Belt and Road’ initiative, the latter would not be possible without a large-scale privatisation and market-based redistribution of wealth.

Ncube also pointed out, aside of the lack of foreign investment, Zimbabwe has been running massive fiscal deficits for too long. Indeed, without a sustainable wealth generation, there is no one to tax – such as the wealthy class, large corporations, or exporters and importers.

© AP Photo / Ben Curtis
Zimbabwe Needs to Move Away From Mugabe's Policies to Boost Economy - Analyst
Another Ncube’s concern is the lack of hard currencies in Zimbabwe’s financial system – such as the dollar, euro or the Japanese yen. This could be fixed through a more active participation in foreign trade, but yet again, to do just that, Zimbabwe needs to build a sustainable market economy almost from scratch – after decades of the Mugabe rule.

However, any substantial reform would require paying off Zimbabwe’s $6-billion debt to international creditors, which include the World Bank, African Development Bank (ADB), European Investment Bank (EIB), and the Paris Club.

“We are looking at many options,” Reserve Bank of Zimbabwe (RBZ) Governor John Mangudya said.

Mangudya added, according to his estimates, Zimbabwean economy would grow between 4.5 and 6 percent this year – quite modest pace of growth for a commodities-reliant emerging market.

Meanwhile, the new cabinet doesn’t seems to have a solid plan of economic renaissance just yet. After years of hyperinflation, Zimbabwe no longer has its own currency – using a mixture of foreign money bills instead.

“Currency reform is a process. The economic fundamentals are not good and ready for us to have our own currency,” Mangudya said. “There is a danger of re-introducing a currency before the fundamentals are met.”

As of now, the new cabinet is focusing on reducing the budget deficit, as well as imbalances in revenue flows and inefficient spending. Another near-term goal is an increase in investor confidence – which might include taking loans from China.

The government is hoping to attract at least $5 bln in foreign investment and $10 bln in domestic investment each year, achieving a sustainable 6-percent GDP growth by 2024. However, the International Monetary Fund (IMF) says Zimbabwe will only grow 2.4 percent this year – a stark contrast to the government’s own projections.