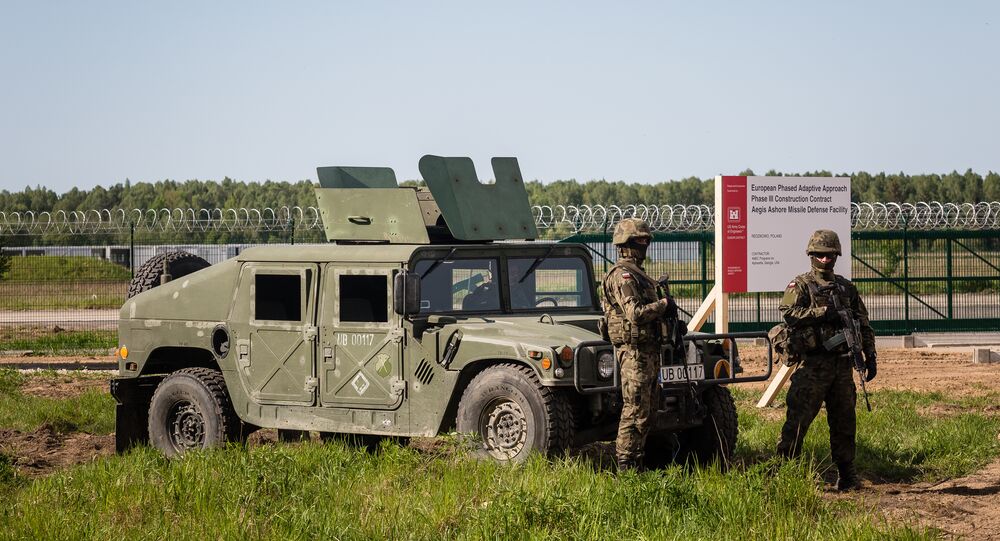 Sputnik: Why is the Polish government willing to have a US military base? Will it obtain the security guarantees it is looking for?

Rick Rozoff: Poland has no choice in the matter, I'm not trying to exculpate President Duda and others who are fanatically beholden to Washington and Brussels, but you know, when they were incorporated into NATO as full members in 1999, these were the obligations, the sort of the obligations that the US Pentagon and NATO obligates, compels member states to do.

© REUTERS / Kacper Pempel
US Troops in Poland: Polish Defense Minister Hopes Stationing Will Happen Soon
We should remember first of all, this may be the most radical example of we're talking about, but within months of Poland being welcomed into NATO in 1999, NATO shifted from Germany something called Multinational Corps Northeast to Poland and it became the Eastern most military command that NATO has.

Shortly thereafter they also put a NATO Joint Force Training Center in Poland in 2010 which, for the most part, coordinates activities of the NATO Response Force, which is a global force by the way.

READ MORE: US Base in Poland to Change Geopolitics of Europe — Polish Defense Ministry

There's also, as of last year, NATO opened a Counter Intelligence Center of Excellence in Poland. About eight years ago the US moved a battery of Patriot advanced capability-3 (PAC-3) missiles into the city of Morag, which is only 25 miles from Russian territory, from Kaliningrad.

© AFP 2021
Why is Poland Hosting a US Military Base 'Not the Best' Option?
They are also now as of this year and next going to be moving in Standard Missile 3 (SM-3) interceptors, it may well be the case of Poland becoming the next nation to shoot down a Russian military plane.

Poland ordered 48 F-16's shortly after joining NATO, which would give it one of the largest fleets of warplanes in the world. To believe any of this is for the self-defense of Poland is really straining credulity, it's quite evidently part of US-NATO plans to extend its military hardware along Russia's western border. This is maybe one of the more dramatic examples of it, but it's part of a pattern that I just documented that goes back almost 20 years.

Sputnik: It's interesting you're giving these facts and figures. It's mind-boggling, it's breathtaking the amount of hardware, military hardware, that's being pumped into Poland. I was having a discussion with an expert about the US geopolitical position, we were talking about the industrial military complex and that it's probably more of a complex than it was in Eisenhower's range and President Kennedy, would you agree with that assumption?

Rick Rozoff: Yes, right you are. Not only that, but the US has been luxuriating, if you will, triumphantly in what it considers its unipolar moment since the fragmentation of the Soviet Union and the breakup of the Warsaw Pact in 1991.

That's given them the entire world to sell arms to, the entire world to wage war in, as we're seeing. We're talking about NATO in relation to Poland, they've waged wars in three continents since 1999, since the war against Yugoslavia, subsequent to that, of course, Afghanistan, Libya. None of those countries are anywhere near the area of responsibility of the North Atlantic Treaty Organization, so what's happened now, you're correct, its the military-industrial complex and the North Atlantic Treaty Organization, and we must keep in mind that NATO is the world's only military bloc, it's the longest-lived military bloc in human history.

It was formed in 1949, it went from 16 members at the end of the Cold War to 29 members, now that's over a 40% increase. It now has members and partners 70 of them, in all six inhabited continents.

© Sputnik / Stringer
US to Consider Establishing Permanent Military Base in Poland - Trump
This is what's happened in the post-Cold War period. I've neglected to mention that the US moved in a brigade of Abrams tanks into Poland recently, the Americans moved in Raptor warplanes. Poland is considering, by the way, updating one of those bases I just talked to you about. So it's clear that with the expansion of NATO that began in 1999, everything, and I'm quoting practically the State Department officials in the United States, everything pushes into the East and the South.

The East I don't even have to tell you, it's the Russian border. You know, what we're talking about in Poland has analogs in nations like Bulgaria and Romania where the US acquired seven major military bases. Three air bases, two of them fairly substantial, and after they joined NATO earlier in the century, and this seems to be the general plan, the question is who is going to call a stop to this.

Sputnik: That's an interesting question, it's also a rhetorical question, I don't think anyone can answer it, even probably the elitists and the people running the industrial military complex. I think they've lost sight of what their endgame is by the sound of things. Obviously, Russia is seen as the threat, are they going to start pushing in and moving hardware into China's border? What do you believe is the end game of the American strategy with regard to this? And is there going to be an end to it or is it just going to continue because of this thirst for arms sales and the requirement to build these armaments to keep these elitists in control and retain their revenue that these armaments being built gives them?

Rick Rozoff: You've summarized various factors quite accurately and insightfully. Notwithstanding the fact that the global arms trade it is unconscionable but lucrative, in that sense I suppose the US merchants of death would prefer not an all-out war of the continuation of military escalation that gives them a consistent profitable rate.

However, these are the factors that are very dangerous by the very nature. It is easy to miscalculate, something occurs, as with the downing of the Russian surveillance aircraft a few days ago, that could create an international crisis. We have to remember they're playing with fire, quite literally.