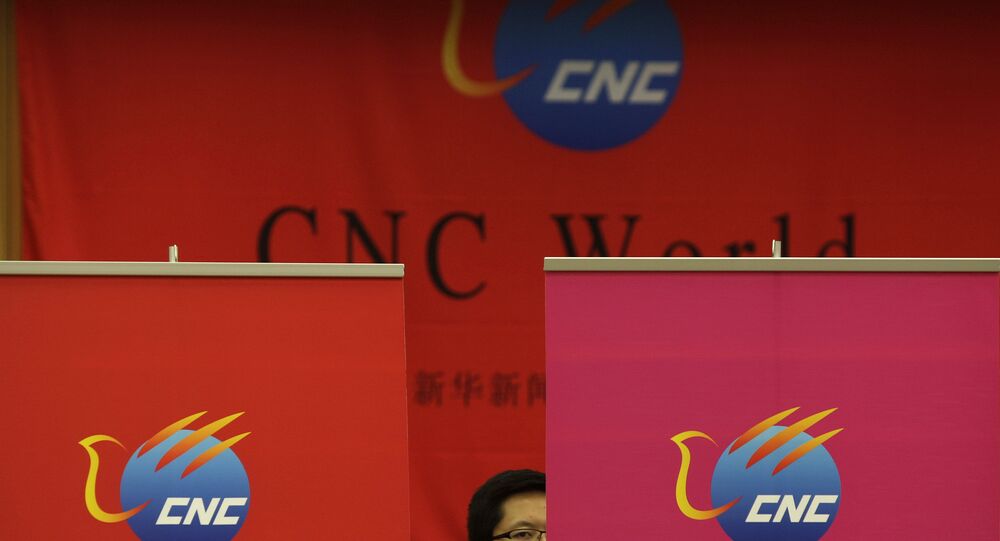 With Beijing and Washington already involved in heated trade disputes, it's unclear just how China will respond to the US after it ordered two Chinese media outlets to register as foreign agents, Jude Woodward, author of book "The US Vs China: Asia's New Cold War?," told Sputnik.

On Tuesday, the US Department of Justice ordered Xinhua News Agency and China Global Television Network, the English-language arm of state broadcaster CCTV, to register under the Foreign Agents Registration Act (FARA). In doing so, both outlets would be forced to turn over information regarding their budgets and ownership structures. The order was first reported by the Wall Street Journal.

A spokesperson for the Justice Department declined to comment after being contacted by Sputnik News Tuesday.

Geng Shuang, spokesperson for China's foreign ministry, released a statement the following day, confirming that the FARA topic had been discussed previously by both countries. "As far as I know, the US and China have had contacts on this issue. We hope that the relevant parties will provide favorable conditions for the normal operation of media instead of creating obstacles," Geng said, adding that Beijing would continue to assist foreign media outlets in China to conduct "unbiased reporting."

​Woodward told Radio Sputnik's Loud & Clear on Wednesday that while the US has now forced both Russian and Chinese media outlets to file under FARA, the cases aren't exactly the same.

"I think they're separate cases, because I think that [US President] Donald Trump has been remarkably persistent in his position in that he would like more friendly relations with Russia," she told hosts Brian Becker and John Kiriakou. "I think he's in a bit of an internal battle amongst US foreign policy elites, including the Pentagon, on what the orientation to Russia should be."

"On China, it's completely clear that obviously it began under [former US President Barack] Obama with the ‘Pivot to Asia,' which has been stepped up remarkably over the last two years since Trump's inauguration," Woodward said. Recalling that the Trump administration first shot off at China when then-President-elect Trump decided to take a call from Taiwan's President Tsai Ying Wen in December 2016, the author noted that the FARA order only fuels tension between the two countries.

This week, after Trump announced that his administration would be imposing 10 percent tariffs on some $200 billion in Chinese goods, the Chinese Commerce Ministry responded in kind by implement its tariffs on US imported goods worth some $60 billion. Both tariffs will take effect on September 24.

The Justice Department previously ordered Russia's RT America and Sputnik News to register as foreign agents in November of 2017 and in January of 2018, respectively. Reston Translator, a company that rebroadcasts radio programs, was also forced to register, as it is a Sputnik Radio partner.

As for whether the Chinese government will retaliate in the same manner against US media outlets working in China, it's uncertain, according to Woodward. "I don't think that China wants to add to the reputation that… it suppresses news media reporting," she said.