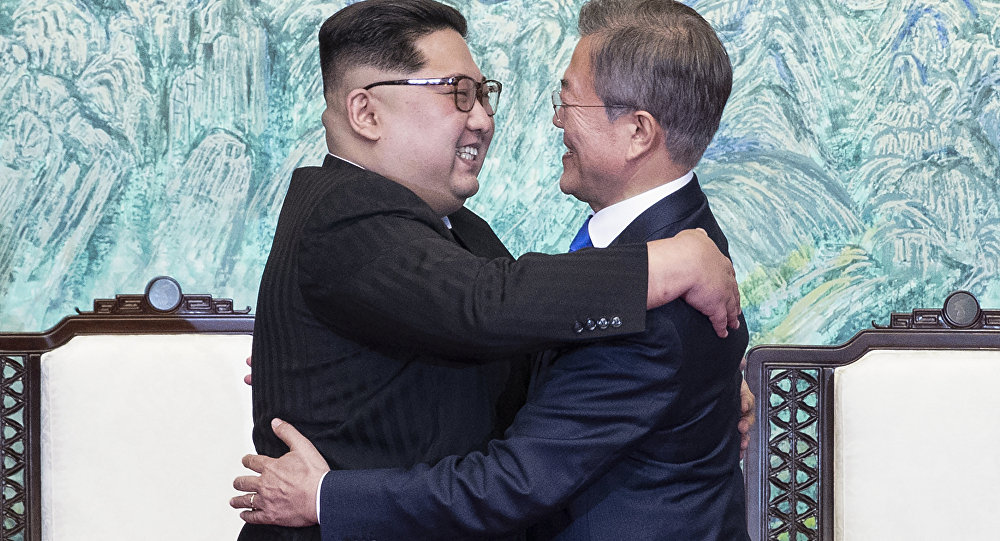 The Trump administration needs to take a page from North Korea's playbook and show some type of commitment to peace that amounts to more than just suspended war games, Simone Chun, fellow at the Korea Policy Institute and member of the Korean Peace Network, told Sputnik.

North Korean leader Kim Jong Un and South Korean President Moon Jae-in marked their third meeting on Tuesday. Moon's three-day visit to Pyongyang is expected to cover talks on the North's continued denuclearization and the rebooting of dialogue between the Democratic People's Republic of Korea (DPRK) and the US.

The pair previously met at the border village of Panmunjom on two different occasions in April and later in May of this year.

​Chun told Radio Sputnik's Loud & Clear on Tuesday that the United States needs to put its best foot forward and work to mend its issues with the DPRK.

"It's very disappointing that as President Moon Jae-in is making another very historic summit… that there's many disagreements within the Trump administration on what to do with North Korea and US negotiations," she told hosts Brian Becker and John Kiriakou. "This is, again, Moon Jae-in taking the initiative."

"We should really be supporting the peace process and really counter the opposition and conflicting messages coming from the Trump administration," Chun added, before adding that "diplomacy will render better results."

In June, US President Donald Trump and Kim met for the first time in Singapore with the hopes of finding a peaceful solution to nuclear matters that had been unfolding on the Korean Peninsula. The historic summit concluded with both leaders signing a four-point agreement that would pave the way toward peace in the region.

Although North Korea has moved toward dismantling its nuclear test sites, and the US has steered away from full-fledged war games, Chun told Becker that Washington's efforts aren't up to par.

"North Korea has done several irreversible steps toward denuclearization and respecting and implementing the Singapore summit, whereas the United States has so far only done one by suspending the war games," she said. "I really think the United States should take reciprocal action and show commitment."

And while a bilateral peace agreement between Pyongyang and Seoul would sound like great news to many, it's likely not going to happen due to South Korea's ties to the US.

"There's a good chance [that Moon and Kim could sign a peace agreement], however, I know that President Moon Jae-in is still very [interested] in working with the United States. I don't think that they'll sign a peace treaty," Chun said.

Kim and Moon are expected to reveal the results of their latest meeting in the days to come. Moon's visit to Pyongyang also marks the first visit to the North by a president of South Korea in 11 years; the last meeting took place in October 2007, when former South Korean President Roh Moo-hyun was in office.