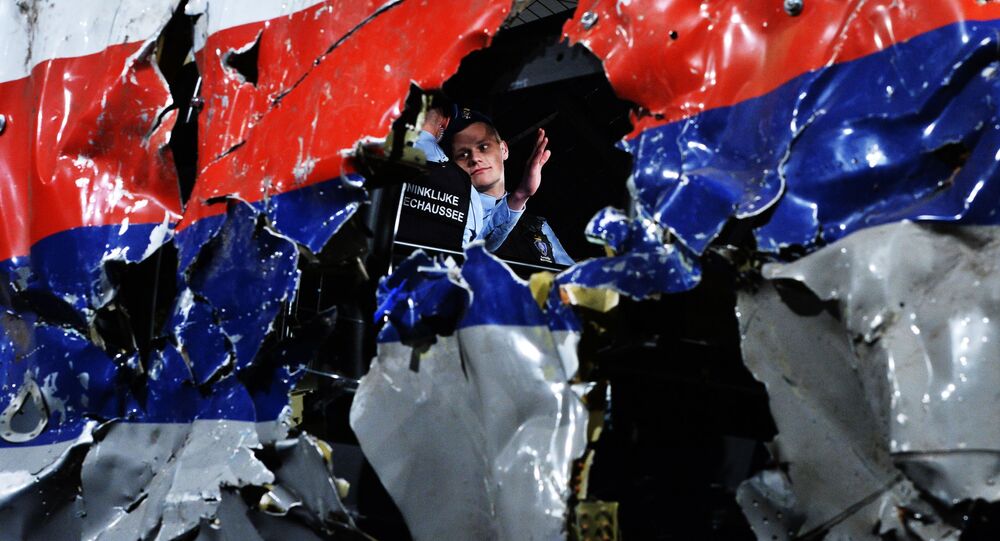 The Russian Ministry of Defense has presented audio proof of Ukraine's links to the downing of flight MH17 in 2014. The ministry also said that Kiev could destroy documentation of the missile that shot down flight MH17 in order to conceal the truth.

Moscow says the videos that were used by the international commission as evidence of Russia's involvement in the MH17 case are fake.

Radio Sputnik talked about the downing of flight MH17 with Hendrik Weber, founder of People Diplomacy Norway, who recently traveled to Donetsk, as well as Crimea, to get an alternative perspective to what is presented in the mainstream European media.

© REUTERS / Maxim Zmeyev
‘Ukrainian Authorities Deliberately Sent MH17 Airliner Into Warzone’ – Historian
Sputnik: What's your take on the new data, bearing in mind you've had this recent visit to Ukraine and Crimea, namely the audio proof of Ukraine's links to the downing of the plane?

Hendrik Weber: I would say this new evidence is very strong and tough and I will hope that this is followed up by the joint investigation team, but I'm afraid that they will not give it so much attention. But I hope so, because this shows us clearly that Russia isn't involved in any way in the downing of this plane.

Sputnik: Do you think that it's not going to shed much light on what really happened with MH17, so it's basically going to be a failed cause?

Hendrik Weber: As I said, this is strong evidence but it is maybe a little bit political, that nobody wants to hear the truth. I think that Russia has to be a part of this joint investigation team. I think a new investigation team with Russia as part of it has to be built up because this evidence shows clearly that it is Ukraine that is responsible for the downing of this plane.

Hendrik Weber: Western media only tell the story that Crimea is occupied by Russians and it's dangerous to travel there. My first trip to Crimea was in 2016; it was a really nice place, you can say a holiday place; it was very impressive. We talked to many people and asked for their opinion on the reunion of Crimea and Russia. The people said they were very happy [of that]; I didn't hear any negative voices.

In our media they say that Crimean Tatars are under pressure from the Russian government; we talked to many Crimean Tatars' organizations and people and we didn't find any evidence for that. That was very impressive, but as I said, Crimea is a normal holiday place if you want to go on holiday there.

Sputnik: Do you believe there should be an international investigation in Ukraine with regard to what's happened? What's your opinion?

© AFP 2020 / EMMANUEL DUNAND
Russian FM Slams Amsterdam for Dropping Charges Against Kiev Over MH17 Crash
Hendrik Weber: Of course, there should be [an investigation]. The most important is that Russia should be a part of this investigation team, so I think it has to be rebuilt. We can't trust the Ukrainian government; it's an illegal and criminal government. Many of the military leaders have close connections to right-wing parties and even fascists; we see it when we talk to people in Eastern Ukraine. So, a new investigation team with Russia as a part of it has to be built up, because this new evidence is showing in the direction of Ukraine.

Hendrik Weber: I don't have any idea why it is [happening] now. But it takes time to find out where this missile was produced and delivered or which military base has it now. It is from 1986, so it takes a little bit of time.

Sputnik: Russian lawmakers have called for the issue to be raised at the level of the UN; how likely is such an investigation to take place? Do you have any feelings or rationale regarding whether Russia should take this to the UN? And if they do, is it likely to be successful?

Hendrik Weber: I don't really know. I think if they can build up a new joint investigation team together with Russia, they will find out the truth and they will find out who is guilty of that. I think the victims or the families of the victims have the right to find out what really happened in 2014. As I said, it's a little bit of a political question if somebody wants to find out [the truth]. You know, Western governments have very close connections to the government in Kiev and that is a little bit of a question if someone wants to hear the truth.

The views and opinions expressed by Hendrik Weber are those of the speaker and do not necessarily reflect those of Sputnik.